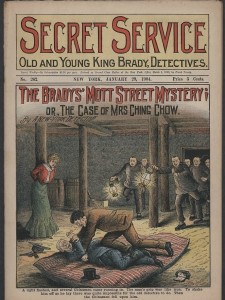 Reading about Chinatown in classic books like ‘Gangs of New York’, one gets a sense that certain mysteries and legends about the neighborhood were already firmly in place. And nothing of these gauzy preconceptions arose to the public consciousness more than the problem of Chinatown’s opium dens. In fact, no other feature of American Chinatowns would resonate more negatively — or in the case of 19th century dime novels, more thrillingly.

The sale of opium may been centered in Chinatown, but it wasn’t new to New York. It’s believed that John Jacob Astor himself, a major trader with the Orient in the 1810s, probably brought Turkish opium to New York. (Edwin G Burrows and Mike Wallace even call him “America’s first large-scale drug dealer.”) But it was mostly associated with the Chinese that arrived in the 1850s and 60s, men from American western territories who brought it with them among their other unique wares.

Opium was a vice of choice for many white New Yorkers, and many became ‘hop fiends’, as described by the scandalized press. It was particularly enjoyed by New York’s small, continental ‘bohemian’ class. By the 1890s there were more opium dens outside of Chinatown than in. Many others experienced the drug via its inclusion in laudanum, prescribed for various medical ills but frequently abused. But no matter; the drug’s foreign, sinister qualities had turned the Chinatown of popular imagination into a devil’s playground.

This was reflected most colorfully in the dime novels of the day. A precursor to the pulp novel and the comic book, the dime novel was obtainable entertainment for regular New Yorker, cheaply written and made, filled with adventures that leapt from the stands due to flashy, often brightly hued covers.

The first of these publications was produced a little over 150 years ago with Malaeska, the Indian Wife of the White Hunter. That first story also set the standard for using ‘strange’ ethnic lifestyles as the backdrop for adventure.

One of the most enduring characters of late 19th century dime-novel industry was Old King Brady, who cracked down on crime in New York’s most vicious and dangerous neighborhoods. Naturally that brought him into contact with Chinatown’s opium world.

In many issues of ‘Secret Service’, Brady and his young companion would rescue helpless women taken captive in an opium den, with chase scenes through the streets of Chinatown. As you can see from the examples below, depictions of Chinatown were broad, racist and wildly inaccurate. The phrase ‘heathen Chinee’ is often used.

These samples are from the Stanford University collection of dime novels and penny dreadfuls. I highly recommend checking out their website, searchable by themes, including New York street scenes. I’ve chosen a few below which recognizable place names, but there are literally a couple dozen that are specifically set among the ‘Oriental opium world’, often in basements or thickly draped parlors. For some reason, there seems to be a trap door in every story!

NOTE: Be careful before reading some of these captions. Needless to say, there’s some racially insensitive language included within these old books. 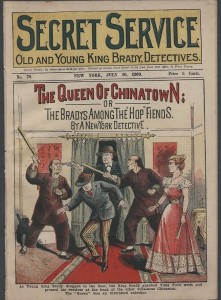 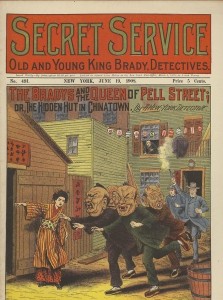 This one in particular seems to revel in the highly stereotypical and sensational image of the ‘tong’ member with their wielded hatchets. Below it, a depiction of what may be some variation of the Hip Sing Tong (called ‘ling’ for some reason). 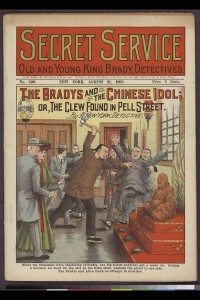 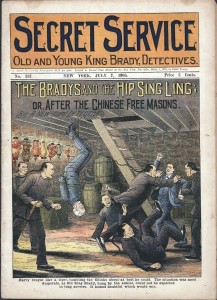 And I won’t even hazard a guess to figure out what is happening here! 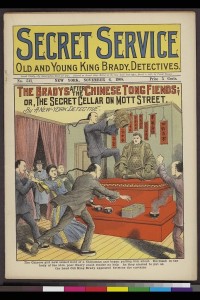 2 replies on “Opium heaven! Fears of Chinatown, immortalized in print”

Isn’t it interesting that in the classic ‘Where The Other Half Lives’, (thanks for introducing me to that, by the way!) Riis seems to have an uncharacteristically blind spot about Chinese immigrants to NY? While his tone generally is very Victorian and dated, he usually seems to have an enlightened and tolerant view of the many immigrants whose lives he documented, but his chapter on Chinatown doggedly rehashes all the cliches about ‘white slavery’ and enforced opium addiction common in the books shown above. Why do you think that was?