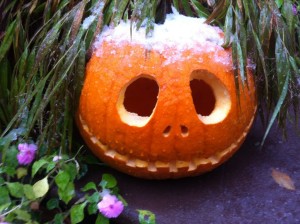 Above: The unusual weather this weekend left my pumpkin with an unfortunate new hairstyle.

We hope you all have a fun and safe Halloween this year!  In this year’s ghost-story podcast, I talked about a haunted church in Bushwick, Brooklyn. Apparently, other spirits find the neighborhood desirable. I’m reprinting an article from three years ago about one such reported sighting. The original article is here
—-

While doing my ghost research this week, I came across an amusing article from an 1894 edition of the New York Times, back when ghost sightings might have merited a serious investigation. (Or, in this case, not so serious.)

The location of the haunting was Brooklyn’s 27th Ward in today’s Bushwick area.

After charting out the notion that Bushwick is an ideal place for ghost hauntings — a “rocky, bleak, lonesome district” loaded with cemeteries and empty houses — the article describes the ghost in strangely sensuous terms:

“The ghost which is at present disturbing the midnight rambles … is that of a woman, who goes about in the scantiest attire, with disheveled hair and bare feet, and falls into a fit of hysterics as soon as anyone approaches.”

The ghostly vixen spooked a set of women who ran home to tell their brothers, who then brandished revolvers and set out to, uh, do what? I’m not sure guns work too well with ghosts. The cocky search party came upon the apparition which “arose from the ground in front of them and waved its long, lean arms an uttered a weird cry that chilled their blood.” The brothers dropped their guns and ran home.

The next night a bolder party of 200 men reportedly went out to the ghost location, around the cemeteries on the Brooklyn/Queens border (between Knickerbocker and Irving avenues). Having no luck in locating the spirit with the posse, one man braved it alone the next night. He returned home “with a face white with terror.” He had not only glimpsed the spectre, but was privy to a “serpentine dance” and “moaning wail”.

They time, the locals did what anyone would do when faced with supernatural entities — they called the police. Apparently with nothing better to do, the precinct caption dispatched 300 officers, armed with everything from guns to rusty army swords, all in an effort to confront the spirit and, apparently challenge it to a duel. One officer even donned an ill-fitting suit of armor.

Given the dramatic response, it is no surprise that some officers remained skeptical. The theory of one officer Holliday: “I’ll tell you what I think it is. I think it’s whisky….it will make a man see anything — ghosts, snakes or anything else.”

The entire area was covered by dozens of armed ghost hunters. However, as the New York Times drolly states, “three or four times there were cries that [the ghost] was coming, but it didn’t come.”

It is then decided that police might has not only scared away this ghost, but has rid all of Brooklyn of any spectral activity.

“There used to be ghosts in Brooklyn but since Superintendent Campbell took charge of the police department they have all been driven away.” He fears Brooklyn’s impending consolidation with New York, for “anti-ghost orders would be rescinded and our streets would be haunted day and night.”

But it appears that didn’t happen when the consolidation with New York came in 1898. Really, when’s the last time you’ve seen a ghost in Brookyn? Hmmm?

You can read the entire article in all its glorious tongue-in-cheekness here.

The location of this scantily dressed spirit was right around here:

1 reply on “Watch out for those naked Brooklyn lady ghosts!”