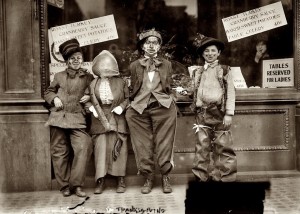 No, these children have not gotten their calendars confused. One early American Thanksgiving tradition amongst rascals and rowdies involved goofy costumes and disguised faces. Sometimes called ‘Thanksgiving masking’, the strange practice stemmed from a satirical perversion of poverty and an ancient tradition of ‘mumming’, where men in costumes floated from door to door, asking for food and money, sometimes in exchange for music. The annual Philadelphia Mummers Parade traces back to the original tradition which some believe began in the 17th century.

By the 1800s, those going door-to-door asking for handouts were most likely homeless and poor. This seems to have inspired a children’s tradition not unlike modern trick-or-treat. “Every street had its band of children,” proclaimed the 1901 Tribune, “dressed as ragamuffins, who kept in the open air for hours.” 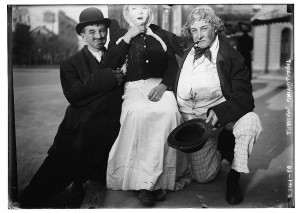 “This play of masking is deeply rooted in the New York child,” said Appleton’s Magazine in 1909. “All toy shops carry a line of hideous and terrifying false faces or ‘dough faces’ as they are termed on the East Side.”

Boys frequently wore girls clothing on this occasion, “tog[ging] themselves out in worn-out finery of their sisters” and spending their afternoon “gamboling in awkward mimicry of their sisters to the casual street piano.”

The New York Times in 1899 found the streets filled with costumed tricksters that Thanksgiving. “There were Fausts, Filipinos, Mephistos, Boers, Uncle Sams, John Boers, Harlequins, bandits, sailors… In poorer quarters a smear of burned cork and a dab of vermilion sufficed for babbling celebrants.”

Those that benefited most — outside of the costumed children, obviously having a ball — were the candy stores that both sold the masks and provided the sweets distributed to the little devils. In particular, Loft Candy stores, headquartered at the corner of West 42nd Street and Eighth Avenue, ran spectacular ads filled with Thanksgiving themed candy treats. 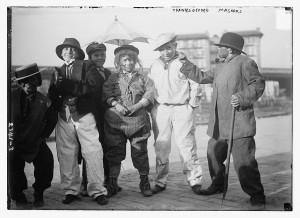 In general however it’s difficult to find too much enthusiasm for this unsavory tradition in newspapers of the day. Thanksgiving was (and continues to be) one of the most austere holidays. Poor, cross-dressing, shoddy-garbed children in masks flew in the face of this perception and was generally discouraged. Editors preferred to focus on family gatherings, recipes and table placements, not only out of social convention but on the behest of advertisers, who made more money selling turkey and china than cheap masks.

While the chaotic tradition was associated with poverty and mischief, some educators saw a bright side to the tradition, especially in the waning years of World War I. One writer on early Kindergarten practices suggested that “the masking on the streets of Thanksgiving Day … has its redeeming quality, in reminding the children of our dear soldiers’ need for real masks.” They would be referring to gas masks. Educational indeed!

Such mischief, not surprisingly, occasionally went out of control. For instance, the New York Tribune in 1907 reports a poor lad “in mask and fantastic garb” who was hit by a train and had his leg amputated.

With the rise and commercialization of Halloween, the practice of Thanksgiving masking seems to have died out. And the entrance of the Macy’s Thanksgiving Day parade in 1924 certain gave focus to the city’s need for costumed celebration.

NOTE: These photos are from the Library of Congress. As such, the locations are unmarked. Most likely they are all of New York children, but a few may be children from other cities in delirious states of costume. (The top photo is courtesy Shorpy) 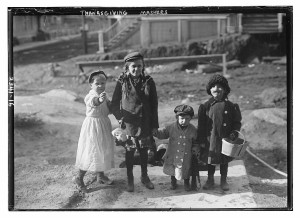 What a wonderful post! Thanks for that, the images are fantastic! You two have a most wonderful Thanksgiving as well!

I can remember kids still coming by for treats on Thanksgiving Day in Jersey City back in the 1950’s….

On 49th Street in Astoria Queens in the 1950s my sister and I would dress up as ragamuffins and go door to door asking “Anything for Thanksgiving?”. We would get fruit and sometimes candy.

What a great site, and new resource for my edification and entertainment! Thanks, as so often is the case, to my sharp-eyed
friend Deran Ludd.