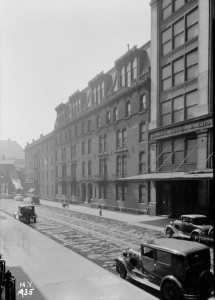 The Stuyvesant Apartments in 1934, already being dwarfed with a newer structure on the right. Please note the ornate entrance to theÂ Third Avenue elevated train to the left of the picture, as well as the streetcar tracks, no longer in use along East 18th Street in 1934,Â running down the cobblestone street. And I’m fairly sure that’s a taxicab in the foreground.

Here are some notes on podcast #131: The First Apartment Building. To listen to the show, download it from iTunes or from here. And for those who have listened, thanks for making it one of iTunes top three individual programs inÂ the travel/places podcasts sectionÂ this weekend!

The Distinction of the ‘First’
How did the Stuyvesant Apartment become known as the true ‘first’ apartment? After all, it’s not like there was a banner over the door proclaiming “Welcome to the first apartment building ever! Come inside!” Urban dwellings were being developed of all shapes and sizes. As I mentioned, there’s not much that technically separates a tenement from an apartment, if you subtract social class and building amenities. There were indeed ‘fancy’ tenements. Some of those buildings are still around today and serve as rather lovely renovatedÂ apartments.

Author Elizabeth Collins Cromley (more on her later) suggests there were a couple other buildings in New York City that could have held this title built earlier, including another that Richard Morris Hunt built on Wooster Street. Those candidates, however, were smaller and less profitable. (One was even refashioned as a hotel.) The Stuyvesant was ambitious in size, glorious in architecture and glittering in its notable residents.

Below: Original drawings of the Stuyvesant Apartments, done by the Historic American Buildings Survey, courtesy Library of Congress 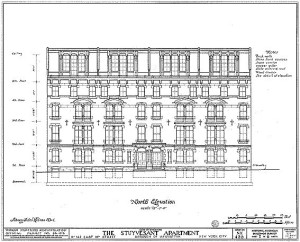 The Other Stuyvesant?
The research for this show became trickier once I realized there was another apartment building that was sometimes referred to the Stuyvesant just a few blocks away, and some scholars have confused the two in their research. For instance, I was quite excited to learn that Clara Clemens, the daughter of Mark Twain, lived at the Stuyvesant until I realized it was most likely the other Stuyvesant. (This author erroneously combines the two structures.)

That building at 17 Livingston PlaceÂ (valued at drastically less than the Stuyvesant) was apparently demolished too; Beth Israel Medical Center facilities have taken up that side of the square since the late 1910s.

That Stuyvesant Name!
The apartment structure was constructed on old Stuyvesant property. Check out this map of the borders of Stuyvesant farm, which consumes much of today’s East Village and the area dominated by Stuyvesant Town/Peter Cooper Village.

Rutherford Stuyvesant, creator of this luxury apartment, died in Paris, on July 4, 1909. His first wife, a member of the influential Brooklyn clan the Pierreponts, died a few years after the construction of the Stuyvesant Apartments. In 1902 Rutherford took a second wife whose name certainly equaled his own in terms of drama — the Countess Mathilde Elizabeth de Wassanaer [More bio details here]

Stuyvesant built a lavish mansion near Allamuchy, New Jersey called Tranquility Farms, populating the surrounding land with imported trees and animals. The mansion was consumed in fire in 1959. Although the ruins were demolished, many other ancient buildings on the property remain intact.Â Rusty Tagliareni has taken some fascinating, haunting photos earlier this year of the ruined area. Take a gander here.

Below: Inside the lobby of the Stuyvesant, circa 1934. 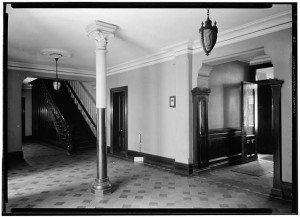 For further reading
There’s a great many books on the history of New York real estate. Definitely invaluable to me this time was Elizabeth Collins Cromley’s ‘Alone Together: A History of New York’s Early Apartments’ and also Steven Gaines’ ‘The Sky’s The Limit’. I learned about the inestimable Mrs. Custer from Shirley A. Leckie’s book ‘Elizabeth Bacon Custer and the Making of a Myth.’

Photos above courtesy the Library of Congress

In addition to the “Stuyvesant,” there was also a “Rutherford” probably associated with the same developer, at 11th Street and 2nd Avenue (175 Second Avenue). This building was the original location of Columbia University’s Rutherfurd Observatory, founded by lawyer and astronomer Lewis Morris Rutherfurd, who had a son named Stuyvesant Rutherford (= the builder??). The spelling of the surname varied.

In 1898, this building housed 6 or 7 families, including George Waring, NY’s first streets commissioner, who died there of yellow fever, which he had contracted in Cuba. One of the other resident families was the Ely family, who may have been related to the Rutherfurds, as the teenage daughter in the family was named Helena Rutherfurd Ely. (She later married a Meade, part of a military family that included George Gordon Meade of Gettysburg, so they were blue-bloods through and through.)

I did some research on the building years ago and that’s about as far as I got.

Tranquility Farms became the home of Lucy Mercer Rutherford after she married into the Rutherford family. FDR, on the sly, visited her there numerous times. He even had the Presidential train re-routed there as it went from WDC to Hyde Park. See Doris Kearns Goodwin’s book about the Roosevelts.