NOTE: In honor of this weekend’s Academy Awards, I’m expanding this articleÂ originally posted last yearÂ with some revisions and newer information.

Despite the Academy Awards being a celebration of all things Hollywood, New York has actually hosted the Oscar ceremony on more than one occasion. Or rather, they co-hosted the event — from 1953 to 1957 — in a rare and soon abandoned bicoastal ceremony that taxed the mechanics of television’s earliest production crews.

There were two reasons for this complicated arrangement. NBC, who was broadcasting the event, had most of their principal stages in New York. After all, the first NBC studios were at Rockefeller Center, where they still remain today. Even The Tonight Show, perhaps NBC’s first and most famous Burbank production, filmed in Manhattan until the early 1970s.

Just as important, many film stars were in New York, unable to get out of theatrical commitments on Broadway. And frankly, in the years before international television viewership, the Oscars simply did not have the same urgency as they do today. Thus, the award show came to them. 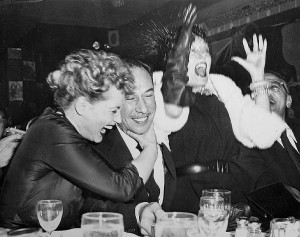 Judy Holliday gives Jose Ferrer a friendly squeeze — and Gloria Swanson bursts with joy — as Ferrer’s name is announced as the winner of Best Actor, at La Zambra in midtown. (Getty Images)

Before splitting the broadcast, the Oscars once tried a very strange live radio remote from a New York nightclub.

For the 23rd Annual Academy Awards, held on March 29, 1951, many nominees like Judy Holliday and Gloria Swanson remained in New York. Both Swanson and Jose Ferrer, starring in the Broadway comedy Twentieth Century, were nominated that year.

Instead of disappointing a sell-out theater audience, Ferrer invited all the nominees to an after-theater party at the La Zambra (127 W. 52nd Street), a nightclub owned by Spanish guitarist Vincente Gomez. A live radio link was set up among the tables, and nominees wined and dined waiting for their categories to be announced out in Los Angeles.

The club was hopping that night. Ferrer won Best Actor (for Cyrano de Bergerac), and Holliday won Best Actress (for Born Yesterday), giving their speeches into a radio microphone as champagne corks popped in the background. (Swanson, who thought she might win for Sunset Blvd., was less enthusiastic for Judy’s win.) It’s appropriate they were in New York, as Ferrer and Holliday both won for film adaptations of Broadway shows in which they had starred. And clearly underscoring the power that the New York stage still had on the film business, Best Picture went to the stage drama All About Eve. 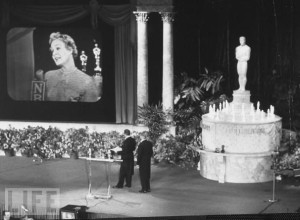 Above: Shirley Booth accepts her Oscar in New York, as the audience in Los Angeles watches on. (LIFE images)

While the Los Angeles crowd were entertained by host Bob Hope, the attendees to the first official bicoastal New York ceremony were met by co-host Fredrick March, a two-time Academy Award winner. The event was broadcast from 5 Columbus Circle, at the International Theatre.

In 1953, the International was a worn out, tired New York stage, having gone through a host of different owners and renovations since it first opened — as the Majestic Theatre — in 1903. At different periods of time, it was owned by Florenz Ziegfeld and William Randolph Hearst, and its stage played hosts to virtually every form of entertainment, from burlesque to ballet.

Definitely an odd setting for an awards program, especially given that this was also the first Oscar show to be broadcast on television. But the International was owned by NBC, who had agreed to fund the inaugural broadcast. And NBC’s fees to broadcast the program were especially valuable to Academy of Motion Picture Arts and Sciences, as the film studios had refused to fund an elaborate bi-coastal show. 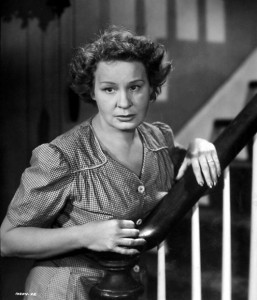 The broadcast began 7pm PST and 10 p.m. here, to accommodate the Broadway stars just stepping off the stage. Due to staggered entrances, many of the seats at the International were empty for much of the ceremony.

Among the nominees sitting in the Columbus Circle theater was Best Actress nominee Shirley Booth (at left), who was starring in the Broadway play The Time Of The Cuckoo on 40th and Broadway at the now-demolished Empire Theatre. She won the Oscar for the film version of Come Back, Little Sheba; she had won a Tony Award for the stage version in 1950.

Given the limitations of early television technology, it’s amazing they were able to broadcast simultaneously between two coasts at all. Glitches did cause a few amusing gaffes for television audiences. When the universally reviled film The Greatest Show On Earth somehow won Best Picture over the favorite High Noon, the camera switched to the New York audience, who sat there not clapping and in mild confusion.

There would not be another Oscar telecast at the International, or anything else for that matter. The very next year, NBC moved out, and the theater was unceremoniously torn down, replaced with one of Robert Moses’ pet projects, the ill-fatedÂ Coliseum convention center. 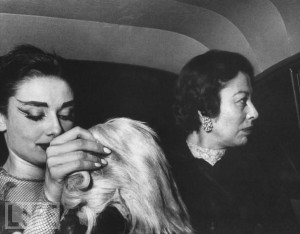 Above: Audrey snatches off her blonde Ondine wig as her limousine races her to the Oscar ceremony uptown.

For the remainder of the Oscars’ short stay in New York, they were broadcast from the New Century Theater*, at Seventh Ave. and 58th Street, right off Columbus Circle and best known as the theater that Orson Welles and his spirited cast stormed in 1937 to perform his musical The Cradle Will Rock.

Film fans were set up in bleachers outside, just as they’re popularly done out in Los Angeles. But one New York nominee didn’t get there in time to meet her fans. Audrey Hepburn was down at the 46th Street Theatre performing the play Ondine (Playbill at right), costumed in a blonde wig. After the show, she raced to the Century in a limousine (with police escort, no less), ripped off her wig, rushed to the bathroom to wipe off her stage makeup, then settled into her seat for less than ten minutes before standing again to accept the trophy for Best Actress for Roman Holiday.

Here’s video of Audrey’s win. You can see the ‘switch off’ between the Los Angeles and New York feeds. 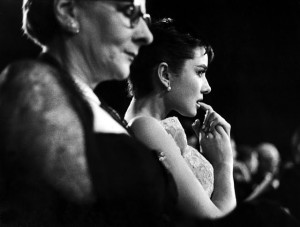 Audrey, off Columbus Circle: Hepburn sits in nervous anticipation at the New Century Theatre, moments before she wins for Best Actress.

The show, hosted in New York again by Fredric March, had another New York icon receiving an Oscar that year — Frank Sinatra, Best Supporting Actor for his role in the Best Picture that year. However, he was in Los Angeles to accept it.

(You can find tons of pictures of Audrey in her post-Oscar glow at the NBC Photo Bank.) 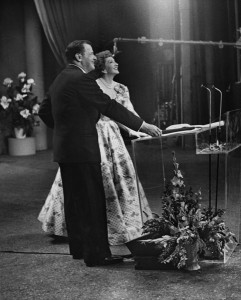 Above: Claudette Colbert and Joseph Mankiewicz presided over a sedate New York audience, while out in Los Angeles, audiences were energized by young comedian Jerry Lewis. (Courtesy Oscars)

It became obvious to most viewers that the bicoastal productions were becoming lopsided. After all, it was early evening in Los Angeles, and most of the young, fresh talent was there. In New York, it was post-theater time, and attracted the older stars — some exhausted from stage productions. Nothing exemplifies this more than the 28th Oscar ceremony, hosted in New York by proper Claudette Colbert and Joseph Mankiewicz and in Hollywood by the hot new comedian Jerry Lewis, whose ribald antics made the New York cutaways seem drab.

But the awards were all about the East Coast. The Best Pictures these two years were for films set in Hoboken, NJ and the Bronx, respectively. Much of the cast of On The Waterfront were actually at the New York ceremony, including Best Supporting Actress winner Eva Marie Saint (pictured below), her pregnancy concealed by a jacket as she mounted the stage to accept her award. (Here’s the video of her win, again highlighting the difference between the New York and the L.A. ceremonies.) Best Director Elia Kazan was also here to accept his trophy. Marlon Brando, however, was out in Los Angeles, apparently where the fun was.

The following year, this time with Colbert going solo asÂ the East Coast mistress of ceremonies, Best Picture went to Marty, another show originating from New York. But not from a Broadway stage. As a symbolic move towards the importance of the small screen, the Ernest Borgnine vehicle was based on a teleplay from the Goodyear Television Playhouse.

Below: Eva Marie Saint, in shock, approaches the podium to accept her Best Supporting Actress Oscar for On the Waterfront, her tasteful ensemble barely concealing her pregnancy. (Courtesy Life images) 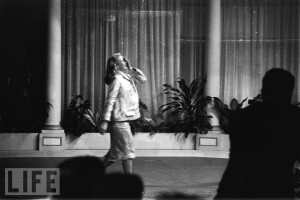 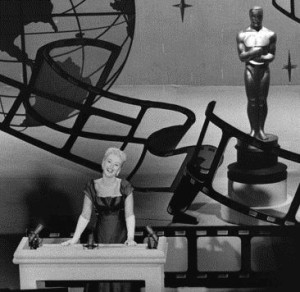 It was clear by this time that the two coast production was more trouble than it was worth. While Hollywood went with Jerry Lewis again, while New York opted for the elegant but comparatively unexcitingÂ CelesteÂ Holm (at right). The New York Times called it ‘a colossally listless affair.’ One of the few shining moments was an honorary Oscar to New York vaudevillian and Macy’s Thanksgiving balloon inspiration Eddie Cantor.

*NOTE: The official Academy Awards website actually has the Academy Awards ceremony in 1954 held at the Center Theatre, the former RKO Roxy Theatre that was originally built as a smaller companion to Radio City Music Hall. However most sources have the New Century (often just called the Century or the NBC Century) as the location. Additionally, the Center Theatre was torn down in 1954. The announcement of its demolition was in October 1953, before the ’54 Oscars ceremony.

To make it even more confusing, New York also had a Century Theatre on the other side of Columbus Circle that was demolished in the 1930s. Hopefully I’ve gotten these theaters all straightened out!

ALSO: You might like to see the Life Magazine photographs of Audrey pictured above in the context of the original Life Magazine article.

3 replies on “When New York hosted the Oscars”