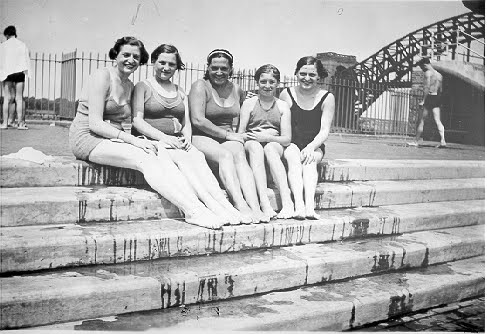 Mermaidens: Five sisters in bathing suits pose on steps of Astoria Pool, circa 1938. Courtesy the LaGuardia and Wagner Archives

FOR YOUR CONSIDERATIONÂ Until May 21st, you can vote every day in theÂ Partners In Preservation initiative, a program that will award grant money to certain New York cultural and historical sites among 40 nominees. Having trouble deciding which site to support? I’ll be featuring a few select sites here on the blog, providing you with a window into their history and hopefully giving you many reasons to visit these places, long after this competition is done. Read about other candidates here.

Astoria Pool is the largest venue for swimmers in New York, outside of the Hudson and East Rivers and, of course, the ocean. Its location in Astoria Park is certainly theatrical, parallel with the river and in sight of two spectacular bridges (the Robert F. Kennedy and the Hell Gate) that sail over toÂ Randall’s Island. For a public pool, its so big (330 feet long, with a supposed capacity of 3,000 people) that it might be more comfortable in a theme park.

Riding the Wave
The pool, the park, one of the bridges (the RFK, aka the Triborough) and the roads you probably used to get to thee places were all 1930s projects overseen by New York Parks Commissioner Robert Moses. But the real fuel behind the creation of Astoria Pool was the Works Progress Administration, a federal agency that infused billions of dollars into local communities during the Great Depression. 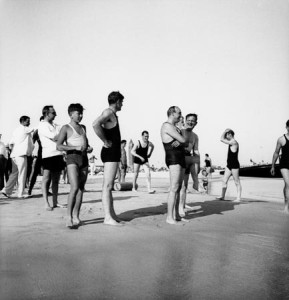 The money came just as Moses (at right, in a swimsuit, at Jones Beach) was ascending into his various governmental roles in city and state government. The result was some of his most earnest and arguably most effective projects. Perhaps his legacy might not be as hotly debated today had he stopped with his greatest hits of the decade: the Triborough, the parkways and the many miles of parkland scattered throughout the city.

And of course the swimming pools, eleven in total, built during the 1930s. They were of special note as a culmination of the modern public facility, using modern design and new technology to create places of recreation for regular New Yorkers. The idea of municipal pools wasn’t new — Philadelphia had them as early as 1890s, and New York had plenty of public baths and even floating baths Â — but standards of decency had changed by the 1920s. Women could cavort with men, as could different social classes. (And occasionally people of different races, although many of Moses’ own pools were guilty of segregation.)

Astoria Pool, with its subdued Art Deco design, was the grand model for all the new pools in the other boroughs. And it was certainly the most popular, from the moment it opened in July 1936. 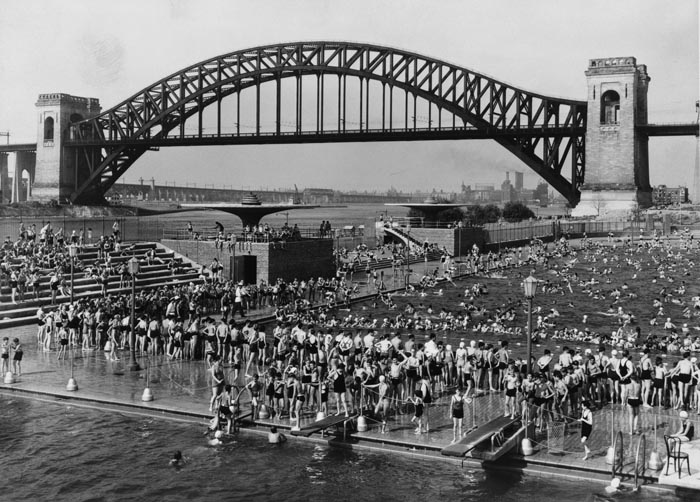 It became a daily destination during the summer for neighborhood children. “In 1936, I was eight years old,” recalled New York Yankee superstar Whitey Ford. “You could stand by the pool on a hot summer day –along with a couple thousand neighborhood kids in the main pool and maybe another hundred in the diving pool — look up, and see quite a sight. On the right was Hell’s Gate Bridge….and on your left, was the brand new Triboro Bridge heading towards the horizon.”

But Moses wasn’t just concerned with public accommodation. He had different intentions for this pool, reflected in the semi-circle of bleachers and that spectacular diving platform stretching like a plant over a deeper half-moon pool. The Astoria Pool was meant to create swimming superstars.

The Diving Board and the Butterflies 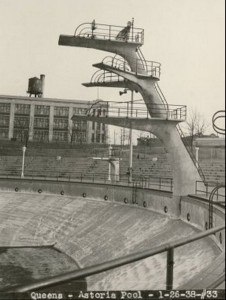 Two days after its opening, on July 4, 1936, Astoria Pool hosted the U.S. Olympic trials in swimming and diving. From these events, victors went straight over to the Games, hosted that year in Berlin.Â


And they weren’t the only athletes tested that month in a New York WPA project. Across the water, at Randall’s Island, Olympic track-and-field trials were hosted at Downing Stadium, producing the man who would become the most famous Olympian of the ’36 games — Jesse Owens, winner of four goldsÂ [For more information, check out the podcast on Randall’s Island and the 1936 Olympic trials.]

Two massive Olympic torches stood astride the pool as competitors fought for a spot on the Olympic team. Events at the Astoria Pool in July 1936 produced several winners, including gold medal swimmers Jack Medica and Adolph Keifer and a slate of athletes that went on win ten of twelve medals in men’s and women’s platform and springboard diving. (Interestingly, the other two medalists were Germans. And both their medals were bronze, yet another result that must have angered Adolf Hitler.)

Olympics trials returned to Astoria Pool in 1952, and again in 1964, producing athletes that again nearly swept the diving events in the Tokyo games. Swimmer Don Schollander went on to win 4 golds that year, the most of any athlete in 1964 and the most medals won by an American athlete since Jesse Owens. But, as it would turn out, the biggest swimming celebrities fostered from the Astoria Pool were neighborhood boys. 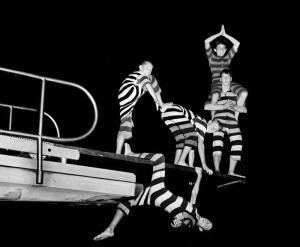 Aqua-Zanies
Imagine being a kid in Astoria, Queens, in the early 1940s, living next to a swimming pool that had helped produce the world’s greatest swimmers! A group of local swimming enthusiasts looked at Astoria Pool’s extended diving platform and saw a opportunity to entertain, forming an athletic-comedy group called the Aqua-Zanies. Garbed in matching stripped ensembles, the teenagers performed wacky acrobatic stunts from off the platform — darting, twirling and sometimes bellyflopping into the water below.

They soon became ‘America’ leading water comedians‘, performing throughout New York and even going on an international tour in the early 1950s. Several Aqua-Zanies went onto more legitimate swimming careers. And certainly these effortless performance have inspired hundreds of others to leap from the Astoria diving platform with equal attempts at gravity-defying levity.

Although the swimming pool has remained a important part of the community even to this day, that diving platform, weathering decades of elemental abuse, was shut down in the 1970s and has become something of a beloved ruin. It was recently announced that the diving pool would be transformed into a theatrical performance space, its semi-circle shape and surrounding bleachers evoking an ancient Roman stage.

With grant money from Partners In Preservation, the Parks Department hopes to rehabilitate the Olympic high dive diving platform — not for the service of future Olympians, but as a monument to the pool’s storied sports history.

Here’s a sketch of the future performance space, and a video from the Parks Department: 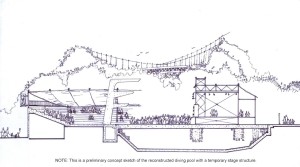 Thanks to the Parks Department for use of the images above. (Diving platform photo courtesy NYC Dept of Records)

So what happened to it why was the diving pool closed do you know?

The lining was torn in the 80s an apathetic politicians who kacked vision left it in a state of disrepair. Mayor Bloomberg was planning to restore it ginally if we got the federal funds if we won the bid for histing sumner Olympics. Sadly we lost the bid and Deblssio did not have the vision nor the business sense ti enter us into the bidding. The money is our there, just needs ro stop being mis appropriated.

Maintenance. The lining was torn in 1980 and the city had budget crisis. The city decided to sacrifice most of the diving pools laying off mandatory lifeguards and not wanting to spend money on diving pool maintenance and boards. Fearmongering the public with suggestiins of luability was used to sway the public into not reacting to the liss very popular sport for the working class masses.

As a Queens native, my girlfriends and I often frequented the Astoria pool. I remember fearfully jumping off the high diving platform, as a dare. I did it only once, but I will never forget the thrill it gave me as well as the respect I learned for our Olympic Platform divers.
Bring back our beloved pool with all its glory.

A petition to restore the diving pool in Astoria Park has about 500 handwritten signatures is online now on change.org and facebook. The call tovrestote us growing louder especially since Mayor de Blasio generously allocated $30 million to restore the parks treasures. Residents and visitors to the pool want to take the unpopular ampitheater plans off the table and reopen the extraordinary diving pool in Astoria Park.

A petition to restore the diving pool in Astoria Park has about 500 handwritten signatures is online now on change.org and facebook. The call to restote us growing louder especially since Mayor de Blasio generously allocated $30 million to restore the parks treasures. Residents and visitors to the pool want to take the unpopular ampitheater plans off the table and reopen the extraordinary diving pool in Astoria Park.

Awesome I was a young lad in the 50s who thought
the pool was an oasis and still remembers
all the fun. Especially the days they opened
and allowed diving at the olympic pool. Great
place park included and views were priceless.
What a place to live and grow up truly great.