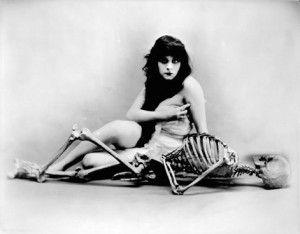 Maneater: Theda Bara in an unconventional portrait. Her publicist claimed it was her lover and that ‘not even the grave could separate them’.


“A vampire is a good woman with a bad reputation, or rather a good woman who has had possibilities and wasted them” — Florenz Ziegfeld

Progressive, liberated women were clearly so frightening one hundred years ago that equating them to undead, bloodthirsty creatures borne of Satan didn’t seem so unusual.

In the late 1910s, women were on the verge of winning the right for equal representation in the voting booth. Women were asserting power in unions, and, in the wake of disasters like the Triangle Factory Fire, those unions were influencing government policy. They were taking control of their destinies, their fortunes, even their sexuality (Margaret Sanger‘s first birth control clinic opened in 1916).

This surging independence came just as the entertainment industry heralded the female form as one of its primary attractions. Ziegfeld’s sassy, flesh-filled Follies — and its many imitators — defined the Broadway stage, mixing  music, sex and glamour with a morality-shattering frankness.

But it was the birth of motion pictures that gave the allure of female bodies an unearthly, flickering glow, as nickelodeon shorts became feature-length films, and the first era of the movie siren was born. 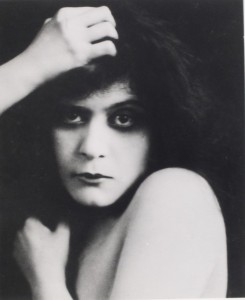 The queen of the vamps was one of America’s most mysterious movie stars — Theda Bara (at left). The magnetic actress, with her steely gaze and jetblack hair, was the prototype for a movie bad girl. She shook convention so dramatically that a critic called her a “flaming comet of the cinema firmament.”

From 1915-1919, she made over three dozen films, most in movie studios located in Fort Lee, New Jersey. It were here that she acquired her famous nickname, based upon her role as a home wrecker in a film inspired by Rudyard Kipling’s ‘The Vampire’. During this period, Bara lived in Manhattan’s Gramercy Park with her family — at 132 E. 19th Street.

She put a face to a new sort of young lady. These were the spiritual children of the prior generation of newly empowered women who fought against the constraints of Victorian society. A few years later, as another vein of female power (the temperance movement) helped bring about Prohibition, these young women would be called flappers, carefree and fueled on the powers of jazz and illegal alcohol.

But to the established class, these ladies weren’t trend-setters. They were devils in black gowns. ‘Know a ‘Vampire’ by the Card She Plays‘, warned a New York Evening World article from March 1919, accompanied by a Theda Bara-like illustration of a snake-like monster.

The article recounts the efforts of a Newark judge attempting the rid the streets of “flirty girlies,” as he called them. “A vampire is a woman who flirts on the street with men, bleaches her hair, camouflages her face, disguises herself with clothes and gives wrong names, but is unable to change her eyes or dimples.” The article laughs off his puny efforts. “Can vamps, of whatever sort, BE suppressed?” 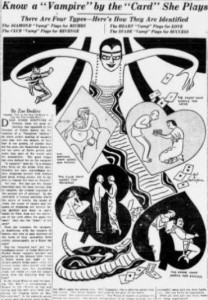 Vampires were of course more readily seen in Times Square, dancers, actresses or cabaret stars. But even your stenographer could be one!, warned one article.

Unlike Bara’s iconic identity as a raven-locked seductress, most ‘real’ vampires were blondes. “[T]he vampire of real life hath the golden hair of an angel, which is never disarranged, same when she letteth it down, to DISPLAY it, on the beach,” warned columnist Helen Rowland, with a little tongue in cheek. (Ms. Rowland was famous for her writings as a ‘bachelor girl’.)

“No one ever saw a vampire in a high neck dress,” said an Evening World advice columnist in 1918. “All vampires must reveal their collar-bones and the contiguous territory.”

The woman vampire was an urban creature, up all night, sleeping all the day. The city was partial cause for her condition. As the New York Times suggested in 1920, “The idea of New York as a vampire to the rest of the country is one which a number of persons have entertained and expressed. To some of them the vampire is Wall Street, to others it is the region of white lights [Broadway].”

Many actress got stuck with the term ‘vamp’ or ‘baby vampire’ — or else, embraced the coy terminology. Juliette Day was a known ‘baby vampire’ for her role in the scandalous 1916 play ‘Upstairs and Down’. It’s no surprise that in the film version from 1919, the role is reprised by the notorious Olive Thomas, a Ziegfeld girl who met a bitter end the following year.

Some actress fought against the alleged stigma. Actress Clara Joel, playing a vampire-type role in a 1918 film, made it known in the Tribune that “she is not a vampire and that she was born in Jersey City.”

The irony of stage actresses trying to shed a vampire image is that Theda Bara, the original vampire, in her first stage attempt in 1920, flopped. The play was supernatural-themed ‘The Blue Flame‘ which opened at the Shubert Theater to cavalcades of unintentional laughter.(A ‘terrible thing’, according to the Times critic.) Bara, who had to deliver such lines as “Did you remember to bring the cocaine?” was roundly trashed.

Shortly thereafter, the vampire moved to Los Angeles. Her film career lasted a few more years, but sound pictures and a strict Hollywood production code pretty much eradicated the existence of vamps on the screen. In New York, meanwhile, her sultry spawn morphed into flappers, populating the speakeasies and cabaret nightclubs of the city.

Below: A 1919 romp called ‘The Vamp’ performed by the Waldorf-Astoria Orchestra

Really interesting to think about how motion pictures may have impacted how women thought of themselves and influenced the rise of feminism.