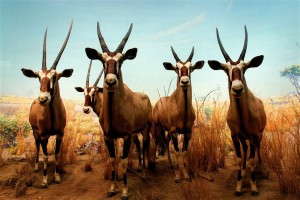 WARNING The article contains a couple spoilers about last night’s ‘Mad Men’ on AMC. If you’re a fan of the show, come back once you’re watched the episode. But these posts are about a specific element of New York history from the 1960s and can be read even by those who don’t watch the show at all. You can find other articles in this series here.Â

Theodore Roosevelt did not donate all the mounted animals at the American Museum of Natural History, as Glen casually suggested to Sally Draper (below) in last night’s episode. Just a great, great many of them, not least of those prizes from his 1909 post-presidential safari, literally thousands of African specimens captured, killed and presented for display here, at the Smithsonian, and other American museums. New York’s museum even holds the contents of Roosevelt’s ‘natural history cabinet’, his collection of taxonomy which he started at age nine from his home on East 20th Street. 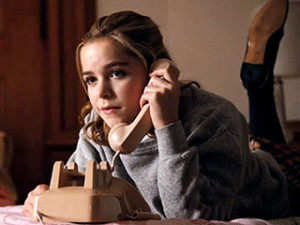 With Roosevelt’s African collection also came expert taxidermist Carl Akeley, who had gone on safari with the former president in 1909 and remained at the Natural History museum to mount and curate its African exhibit. The hall of African mammals is named in his honorÂ and continued to define the museum in the popular imagination.

The early 20th century was a golden era for taxidermy, as greater understanding of natural habitats allowed curators to present their specimens in ‘realistic’ settings and lifelike poses. But such understanding placed a deadline upon classical museum taxidermy; the more one understood the underpinnings of the natural world, the more absurd such displays seemed.

With the 1960s came a greater awareness of the plight of rare animals and their disappearing habitats that rendered the presentation of mounted taxidermic displays into antiquated, often vulgar set pieces. The first federal endangered species act was passed in 1966 and greatly expanded upon with the Endangered Species Act of 1973, ‘the Magna Carta of the environmental movement‘.

The staid animal galleries at the American Museum of Natural History faced other surprising challenges. The museum reached record attendance in 1967, but people weren’t necessarily there for the mounted elephants. The American Apollo missions ignited a public passion for space science, and with the installation of the awe inducing Zeiss projector in 1960, the museum’s Hayden Planetarium easily became its hottest attraction.

Leading up to its centennial in 1969, the museum prepared several new halls (including several of the current anthropology exhibits) and renovated many others; thus Glen and Sally most likely would have seen many ‘Closed for Renovation’ signs during their trip here. Â Had Sally not had a certain emergency which sent her from Glen’s side, the pair might have wandered over to the bright, new exhibits in the Hall of the Indians of the Plains, which opened in February 1967. 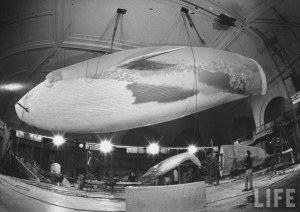 A refreshed Milstein Hall of Ocean Life would dazzle audiences upon its reopening in 1969, and the museum’s trademark blue whale was presented in a new context — the 1966 worldwide ban on hunting the endangered ocean mammal. The extensively revitalized exhibition also presented a new 1960s museum trend — the use of artificial, plastic models over actual animal carcasses.

By 1967, New York’s natural history museum — which once touted a staff of 20 full-time taxidermists — employed only two. “There’s not much left to collect and mount (we don’t say stuff),” lamented staff taxidermist David Schwendeman.

Taxidermy would live on in the worlds of hunting and fishing. One need only take a trip today to the Bass Pro Shops World Headquarters in Springfield, Missouri, to witness a world where the art of taxidermy continues to thrive, as though there was nothing creepy at all about it.

But in the vaunted hallways of the American Museum of Natural History, the elder animal displays serve a new educational purpose — a preservation of science’s evolving views on the natural world.

NOTE: Since ‘Mad Men’ doesn’t film in New York,Â Â Jen Carlson at Gothamist deftly notes that the exhibit displayed in the episode is from Los Angeles’s natural history museum.

1 reply on “‘Mad Men’ notes: The 1960s enlightenment of New York’s natural history museum leaves taxidermy in the past”