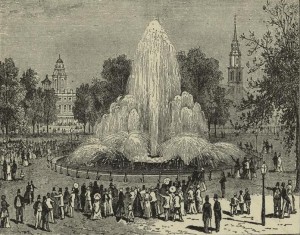 The very first decorative fountain in New York City was the City Hall fountain, unveiled on October 14, 1842 during the ceremony for the opening of the Croton Acqueduct, the sophisticated series of pipes and reservoirs that provided New Yorkers with their drinking water. The fountain, which propelled water 50 feet in the air, was not only an embodiment of the Croton’s abundant supply,  it was a celebration of the city’s growing wealth.

As the first burst of water sailed into the air, the New York Sacred Music Society sang an ode specially written by George Pope Morris*, a publisher and poet best known perhaps for first publishing Edgar Allen Poe’s ‘The Raven’. The song was called ‘The Croton Ode’ and featured the zesty lyric:

Water leaps as if delighted,
While her conquered foes retire!
Pale Contagion flies affrighted
With the baffled demon, Fire!

The font runneth over. Soon New Yorkers were so accustomed to the abundance of water that George Templeton Strong remarked, “Taking a shower bath upside down is the last novelty.”

Alfred Emanuel Smith said in 1910 that “the spurting of the (then) new fountain, finished for the occasion, was the official proclamation to all New York that the Croton water was ‘turned on’.”

But wait! Didn’t Union Square also have a fountain?, you might ask.


The uptown park, from a design by Samuel Ruggles, opened in 1839 — before the City Hall fountain debuted — and was indeed planned to have a central fountain.


Mostly likely it was built around the same time — I believe it was even ‘turned on’ at the same time — and, of course, it also pulled its water from the Croton source. We can call it a draw, but given the pomp and circumstance, it seems New Yorkers of the day considered the City Hall water feature to be paramount over its uptown companion.


*Mr. Morris’ most popular song, written in 1837, was called ‘Woodman, Spare That Tree!’ You can read the entire ‘Croton Ode’  here.

Is this the same fountain in City Hall Park today?

The fountain is still there, though it does not spout anywhere near that height now….