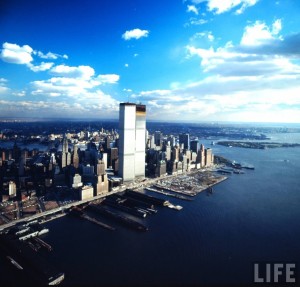 Two beautiful and unique 1971 photographs by Life Magazine’s Henry Groskinsky showing the nearly completed World Trade Center.  These are fascinating not only for the appearance of the towers as they prepare to lord over the ’70s skyline, but also to note what’s notably not there yet — the entire Battery Park City area. At this point in time, the land is still being formed using the excavated materials from the World Trade Center site and dredged sand from other places in the harbor.

Manhattan filmmaker Gary Kaskel made this jazzy student film about the Towers in 1972, highlighting a day of construction and capturing the wonder and strangeness of the towers. It’s followed by a post-9/11 report from CBS which used footage from the movie:

The construction of the Twin Towers of World Trade Center in late 1960s and early 1970s means a great climax of the postwar office building boom. Many office buildings were build in the same time dramatically changed Manhattan skyline. But these building boom climax were when the city was a political and financial crisis and the real state market wer on decline. New skyscrapers in a great urban decay context.

I think it’s even more interesting to note that a full 20 blocks of Tribeca just north of the Barclay-Vesey Building have been leveled to make way for the hideous community college and all the development there.

That boneheaded project eliminated the North-South route of Washington Street and the East-West streets Duane, Jay, Franklin and Beach — thus turning 20 functional city blocks into just five superblocks and burdening them with some of the worst architecture in the city.

I wonder what stood there before? Judging from the architecture just to the East, the razed area contained many of the most beautiful buildings in the city — probably pretty dilapidated by then but just waiting to be restored into what could have been one of the best neighborhoods in town, particularly if the city hadn’t gone completely insane and allowed Westway to die.

Any photos of that part of the neighborhood before it got leveled?

thank you for sharing this, these pictures are emotional and hard to see. it’s nice to see them despite that. Thank you.

I remember being in my math class on 9/11. It really changed the course of my life. I’m not sure if I would have joined the Marine Corps if it wasn’t for that.