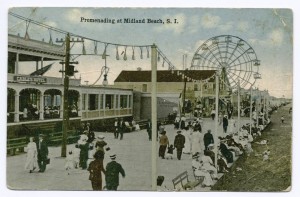 In the spirit of P.T. Barnum, Mayor Michael Bloomberg yesterday announced plans to build the world’s largest Ferris wheel next to the ferry terminal on Staten Island. The amusement, called the New York Wheel, will stand 84 feet higher than a similar Ferris wheel in Singapore and also nods towards the London Eye, a ride built in 1999 that quickly became a centerpiece of British tourism.

Obviously geared towards boosting tourism to Staten Island, the plan offers something for the residents of the borough in the form of a “retail outlet complex.” With the ballpark home of the Staten Island Yankees and the recently redesigned ferry terminal, the new projects will radically alter the face of the St. George neighborhood. 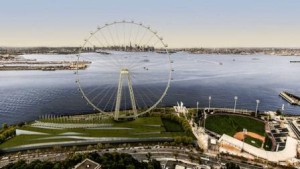 (At right: A rendering of the new wheel, courtesy ABC.)

But the idea of a Ferris wheel drawing tourists to Staten Island isn’t a new one. The very first Ferris wheel in the borough was constructed back in 1893, on the opposite shore in the old Midland Beach resort area.

Midland Beach and adjacent South Beach were Staten Island’s answer to Coney Island and Rockaway Beach, back in the era before any of those amusement centers were officially a part of New York. The Staten Island resort area got its wheel the same year that George Washington Gale Ferris Jr. installed his most notable wheel — and thus giving the amusement its name — at the World’s Columbian Exposition in Chicago.

Staten Island’s ride — called an ‘observation roundabout’ — was built by Ferris’ rival William Somers after he was rejected a spot at the Chicago fair. It was probably similar to Somers over roundabouts built on Asbury Park and Rockaway Beach, of wooden construction, about 50 feet in diameter with approximately 16 passenger chambers. [Check out Norman Anderson’s history of Ferris wheels for more information.)

Thanks to Ferris and the fame of the Chicago World’s Fair, nobody was calling them roundabouts by the start of the 20th century. The Ferris wheel hovered over Midland’s rows of bathing pavilions and beer gardens along the boardwalk and was joined by the Happyland amusement park in 1906. 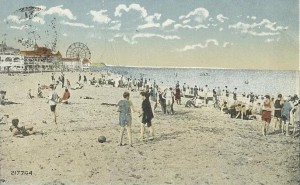 The New York Tribune sang praises of the amusement in 1904: “If they [the young of all ages] desire pleasure with an element of excitement, [they] may venture a ride in the great Ferris wheel, from the summit of whose broad circle they may enjoy an excelled view out over the broad bay to the open sea.”

The St. George Ferris Wheel is slated for completion in 2015. As for the old Midland Beach wheel, it appears to have been destroyed — along with a great many other amusements — in a devastating fire in 1924.

And by the way, Ferris’ original wheel, the one that was at the Chicago World’s Fair? There were actually plans to bring the wheel to Manhattan in 1894 and set it up — on Broadway! Sadly, these plans fell through. 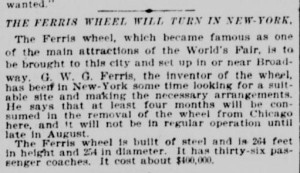