There was limited gas rationing during the 1970s, but the longest a gas ration was ever sustained in New York City was 70 years ago, during World War II, officially becoming a nationwide policy in December 1942. It was actually rubber that the government was protecting, conserving it for military vehicles by reducing the amount of rubber used by America’s growing car culture. 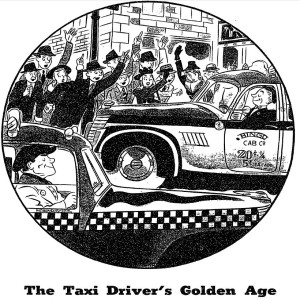 Gas was distributed based on coupons, allotted by communities at their discretion, according to author John Alfred Heitmann. An underground market of ‘chiseled gas’ naturally sprung up, “particularly on the East Coast.”

Most New Yorkers, however, adhered to the rationing. Interestingly, the New York Times and others have referred to the 1942 rationing as a ‘golden age’ for city taxicabs, raking in fares as New Yorkers left their private cars home. “They are making so much money it runs out of their ears and into their savings banks.”

At left: An illustration from the 1943 Times article. Good times for taxi!

According to the Times, a fleet of 9,300 New York cab drivers received enough gas to travel 100 miles a day and were taken off the road only one day a week. Essentially, every street in Manhattan would have looked like Times Square today — a sea of taxis, checkered, yellow and other colors.(Yellow wouldn’t become the standard color for medallioned cabs until the 1960s.) 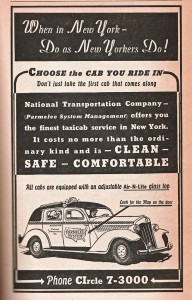 I once had to take nothing but cabs for a few weeks. It was horrible. I never knew if it was going to be disgusting or driven by a lunatic. I much preferred the subway. At least it was consistent, cheaper, and usually fast.