I’ve never understood why tourists wait in line to get into the Fifth Avenue Abercrombie & Fitch clothing shop, with its several floors of basic casual clothing, perfumed showrooms and salespersons who are often barely wearing the apparel they are attempting to sell.

But visiting an Abercrombie & Fitch store from one hundred years was quite a different place indeed. David Abercrombie founded the sporting goods store in 1892 from a storefront at 36 South Street, expanding in 1900 when one of his most loyal customers, lawyer Ezra Fitch, bought into the enterprise and moved it over to 314 Broadway. By 1917, the store had moved once again to an eight-floor building at Madison Avenue and 45th Street.

Here’s an advertisement from the New York Sun, September 21, 1919, featuring apparel “which mate[s] with heather and scarlet leaves,” perfect for big-game hunting — or a social facsimile thereof — golfing, driving or general travel. Children get special attention as well, with “outdoor clothes for boys which rival those of their fathers.”

Click into the ad to get a closer look. The original ad is here if you’d like to inspect it more closely: 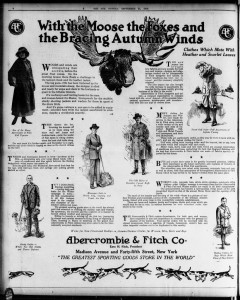 Courtesy the Library of Congress