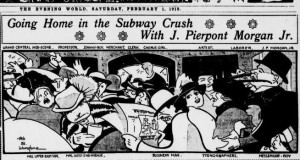 Any of you who ride the 4-5-6 train in rush hour will especially relate to this story.  It takes place, in fact, on that very line, one hundred years ago.

Will B. Johnstone, an artist at the New York Evening World, noticed an interesting sight on his subway ride that morning, February 1, 1913, the day before the opening of Grand Central Terminal.  Crammed up against the wall of the train was J. P. Morgan Jr., son of the famous financier.

Such a sight greatly amused Johnstone. “There stood J. Pierpont Morgan Jr. ignominiously caught in the deadly rush hour!”  Even more remarkable, the writer notes, was the fact that Morgan was a principal financier for the Dual Contracts project, which would greatly expand the subway system and double the length of tracks into the other boroughs. 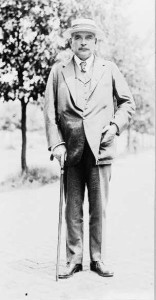 “I wondered why he was using the subway instead of a diamond-studded limousine? What did he mean by travelling with the common herd and of all times during rush hour?”

At one point, Morgan was accosted by a young woman with “a large velvet hat and the hat had two long stiff quills projecting from it like the horns of a billy goat, and as dangerous. Mr. Morgan’s face was impaled between them.”

The woman hat jostled about during the bumpy ride, and “[t]he quills began to bob around his face and he was busy trying to avoid them.” Others noticed the financier’s dilemma and began laughing with him.

“She’s going to get me yet,” he laughed to another passenger.  “And he was right,” Johnstone noted, “for one side of the quill and then the other jabbed him in the face.”

Finally at the Grand Central Station**, he had to push his way through the crowd and barely got of the car before the doors closed.

“This is no way to treat royalty,” Johnstone laments.

Less than two months after this incident, his father Morgan Sr. would die in Rome, leaving him one of the world’s largest business enterprises.  I wonder if he ever rode the subway again after that.

You can read the original article at the Library of Congress.

**The subway station opened in 1904 and rattled away underground throughout the entire construction phase of the terminal above.