Grand Central Terminal has seen millions of people rush across its Main Concourse over the past one hundred years, and more than a few movies have captured that commuter ebb and flow. Â But while Grand Central is occasionally a backdrop for romance — especially during World War II, when returning soldiers would arrive to meet their loved ones — filmmakers have preferred to capture a darker aspect to the landmark. 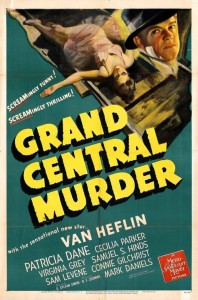 The Beaux-Arts train station has become an ideal location for thrillers, mysteries, fantasies and horror films, a backdrop for chases and a metaphor for chaos and disorientation. Â In the movies, its concourse feels even more cavernous and mythic, its train tunnels havens for the unknown.

During its first half-century, Grand Central was known mostly for its trains — in particular, the Twentieth Century Limited, the luxurious passenger locomotive that attracted the most famous people in the world. Â In fact, the most common place to see a celebrity in the 1930s and 40s would probably have been Grand Central, watching politicians and stars boarding the most famous train in the world.

Below: A phony version of Grand Central Terminal used in the film The Thin Man Goes Home. (Courtesy On The Set of New York) 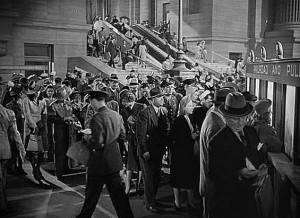 As the train station deteriorated after the 1950s — as train travel itself fell into disregard — Grand Central became a darker, dangerous place in the movies. The travelers, the commuters, are now a backdrop for chase scenes and violent shootouts, homeless people and even psychos stalking the yellowing, banner-filled concourse of the 1970s and 80s.

Its rehabilitation in the 1990s brought monumentality back to Grand Central and brought it back to the movies as a place of respect and beauty. I would never recommend you watch the remake of Arthur starring Russell BrandÂ except for this particular scene which demonstrates the Terminal’s remarkable transformation.

Grand Central makes a brief appearance in the 1988 comedy Midnight Run with Charles Grodin and Robert DeNiro. (CourtesyÂ On The Set of New York) 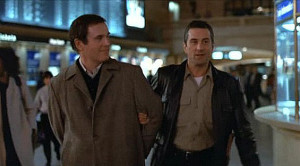 Here are my personal choices for Grand Central’s top ten moments in cinema. Â I’m sure I’m forgetting a few choice ones, so please add them in the comments section if they come to mind:

10 The Avengers (2012)
The Terminal as a fortress, a hall of justice. Â The MetLife Building behind it is completely dismantled and replaced with Iron Man‘s new headquarters, but nobody would ever think of doing that to Grand Central. In fact, our heroes fight inter-dimensional aliens right in front of it, their phalanx mounted on the overpass below. Â As Earth’s finest stand in akimbo waiting for the attack, the statue of Cornelius Vanderbilt stands equally defiant in the background. Â (For another sci-fi use of Grand Central’s exterior, see Will Smith in I Am Legend.) 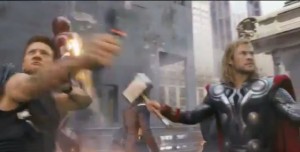 9 Â Necrology (1971)
The building has inspired the avant garde as well. Â Years after Andy Warhol turned his camera to the Empire State Building, experimental filmmaker Standish Lawder found supernatural inspiration inside Grand Central for this odd little film ostensibly about the afterlife. Â Stay for the credits.

8 Spellbound (1945)
This isn’t even Alfred Hitchcock‘s best film usage of Grand Central (see below), but it’s notable in that both Grand Central and Pennsylvania Station are used in this psychological thriller starring Ingrid Bergman and Gregory Peck.Â  I can’t recall any other film that would have included both iconic New York landmarks. With this film, Hitchcock also playfully mocks Grand Central’s wartime reputation as a place for departing lovers, even while giving into those romantic impulses.

7 The House on Carroll StreetÂ (1988)
This somewhat unsuccessful thriller (with a spectacular cast) is notable for its creativity involving a climactic chase scene up in Grand Central’s inaccessible upper tiers. Â You can see a little bit of it in this trailer:

6 Superman (1978)
Lex Luther’s secret lair, eccentrically decorated, is hidden in a forgotten tunnel underneath Grand Central. Â His lackey Otis (Ned Beatty) is tracked to the concourse by police officers, but Luther has set a deadly trap for one of them. Â Another reason not to roam the tracks by yourself!

Later, the super villain waxes about the benefits to his Grand Central lair as the trains rumble overhead.

5 A Stranger Is Watching (1982)
Had Lex not been defeated, he would have been sharing the tunnels with the maniacal killer of this schlocky thriller, based on a novel by Mary Higgins Clark. Â While this movie is pretty bad, Grand Central is used to superb effect, a veritable haunted house of dark tunnels and abandoned elevators. Â There’s even mention of Franklin Delano Roosevelt’s secret elevator!

3 Seconds (1966)
This bizarre John Frankenheimer drama starring Rock Hudson uses Grand Central Terminal (and a unique camera angle) to set the film’s off-kilter and twisted perspective. Â It becomes the crossroads where opportunities of a second chance are literally handed to you, if you dare to take them.

2 The Fisher King (1991)
Having hosted various mentally disturbed escapades in prior films, we now get to look in on an actual Grand Central fantasy in this Robin Williams film, as the deranged hallucinations of his character turn the bustling room into a glorious dance floor.

1 North By Northwest (1959)
Has Grand Central Terminal ever looked as beautiful as it does in this pivotal scene from Hitchcock’s great 1959 masterpiece? Â It gives Cary Grant opportunities to be suave, pensive and fabulous all at once. Â It also embodies the tension and danger that would influence other filmmakers in later years to come to Grand Central for inspiration.

Whether or not it was intended in The Thin Man Goes Home to be Grand Central Terminal, the picture depicts not Grand Central, but rather Pennsylvania Station, in the ticket area and waiting room, with the stairs/escalator in the background leading to the arcade and the Seventh Avenue entrance…