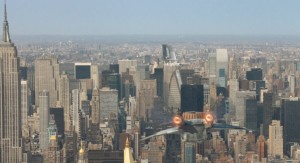 Fare thee well, you who we once called the Pan Am. We hardly knew thee. Image from Comic Book Movie

Recent fantasy films and TV shows have found ways to alter New York City through the creation of alternate universes.  On Fox’s Fringe, a parallel world features a New York where the World Trade Center wasn’t destroyed, the Department of Defense is in a newly-bronzed Statue of Liberty, and Robert Moses never drove the Dodgers from Brooklyn. (The show also showed us what the skyline might look like with some Antonio Gaudi architecture.)

Comic book movies delight in showing super villains destroying the city — this summer’s ‘The Dark Knight Rises’ blows up bridges and ravages Federal Hall, while ‘The Amazing Spider-man’ will trash Midtown — and sometimes they even re-write history itself.

In ‘Captain America: The First Avenger’, the title character, a resident of Red Hook, discovers underground government laboratories in downtown Brooklyn during World War II.  Elsewhere in this Marvel Comics timeline, Moses’ World’s Fair of 1939-40 was such a smashing success that Tony Stark (aka ‘Iron Man’) turns the site into a year-round glittering expo of technology!

The latest Marvel adventure ‘The Avengers’ takes a more proactive approach to revising the city landscape, as though the entire film was a surly New Yorker architecture critic.

Thanks to the Commissioners Plan of 1811, allowing for a grid striped with long uninterrupted canyons, grotesque alien beings from Asgard can fly down the avenues unabated, wrecking havoc through Manhattan — Park Avenue in particular. Fortunately our heroes gather at Grand Central Terminal‘s traffic overpass, a critical location that they turn into a picturesque battleground. (Honorary Avenger Cornelius Vanderbilt, or at least his old statue from St. John’s terminal, stands resolutely in the background, ready to employ his superpower of acquiring railroads.)

But one famous New York building is notably missing from these shenanigans. Stark, played by Robert Downey Jr., has constructed an energy-efficient new supertower for Stark Industries right on Park Avenue itself. To build this, he has clearly gotten permission from the city to methodically dismantle the MetLife Building (the former Pan Am Building).

The filmmakers have specifically chosen not to merely erase the MetLife Building, but to specifically display it being taken apart. The building is shown greatly reduced in height, decorated with cranes disassembling it like a tinker toy.

While other buildings enjoy the glamour of being reduced to rubble by gigantic mechanical space fish, the MetLife is ignobly taken apart to be replaced by an even taller, uglier structure. In fact, the dismantling looks a bit like this picture, an image of the Pan Am Building during construction in 1969: 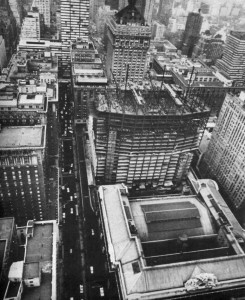 (You can find a few more interesting construction pics here.)

The MetLife Building is easily one of the most disrespected structures in Manhattan and has been almost since the beginnings. Ada Louise Huxtable famously wrote: “A $100 million building cannot really be called cheap. But Pan Am is a colossal collection of minimums.”

According to author Meredith Clausen, “The Pan Am Building and the reaction to it signaled the end of an era. Begun when the modernist aesthetic and the architectural star system ruled architectural theory and practice, the completed building became a symbol of modernism’s fall from grace.”

Its broad-shouldered silhouette calls a halt to Park Avenue in a dated style that hovers between two Beaux-Arts structures (Grand Central to its south, the Helmsley Building to its north). Yet people blame the building for somehow ‘ruining’ Park Avenue — when the two other structures already blocked it — and its sly octagonal shape today makes it one of New York’s more interesting Brutalist-style examples.

This is what I was thinking while Thor and the Hulk were tearing into alien lifeforms. 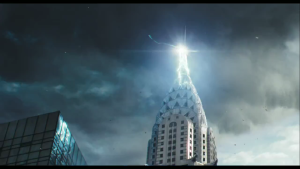 But ‘The Avengers’ isn’t entirely disrespectful of architecture. In fact, the Chrysler Building is practically fetishized as an ideal view from the newly built penthouse of the Stark Building.

Its antenna spire, which makes it New York’s fourth largest building, is even utilized by Thor in the battle to save the Earth. William Van Alen, the building’s architect, would have been quite amused. This very spire was hoisted to the top of the structure from within the building itself in October 1929, a surprise accessory that allowed the Chrysler to take the title of New York’s tallest building from 40 Wall Street.

4 replies on “The Avengers Disassemble the MetLife Building”

I enjoyed the placement of the Stark building in the movie for the arrogance it displayed. OF COURSE Stark would choose one of the few building plots in the city that would separate his building from the grid!

[…] shot in New York rather than Cleveland, and not just because the show does not have the budget to replace the MetLife building with a CGI model of Avengers’ Tower. The city is part of the fabric of Jessica Jones, as was clear as early as AKA Crush […]

[…] Netflix shows are very consciously and tangibly rooted in New York, in a way that goes beyond the stubborn refusal to digitally erase the MetLife building to make room for the fictional Stark To…. Jessica Jones luxuriated in the city, from making the MTA a plot point in AKA You’re a […]

I started work at the Pan Am Building. I enjoyed the restaurants, Charlie Brown Zum Zum and Trattoria. So sorry about the helicopter accident and change to MetLife. Christmas toys for kids was so nice every year.