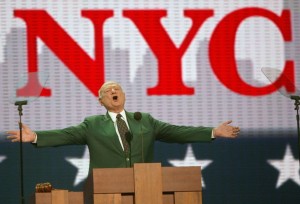 Koch in 2004 at the Republican National Convention which was held in New York City. Photo by Joe Cavaretta, courtesy the Associated Press

Did you know Koch already had his gravesite already picked out (at Trinity Church Cemetery) and had even erected the tombstone? More info in my 2011 article on where all the New York City mayors are buried.