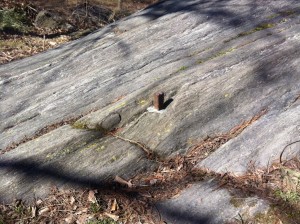 So this random little bolt in a rock may not look like much, but it could be the last remaining on-site evidence of the creation of New York City’s grid plan.

Inspired by Marguerite Holloway’s book ‘The Measure of Manhattan‘, I went looking for this unusual object hidden in Central Park, discovered by geographers several years ago and believed to be a bolt used in the original survey of Manhattan by John Randel Jr. in the 1810s.

Randel and his team poured over the island, marking spots along a delineated grid that would become the intersection of streets and avenues.  Reuben Sky Rose-Redwood, one of the researchers who discovered the odd bolt, believes it’s from Randel’s original survey due to its placement.

Indeed this would have be the exact location of an upper Manhattan intersection had Central Park not been carved out in the 1850s.  If this random little bolt is indeed part of that original survey, then it’s truly an extraordinary link to New York City history.

I’m not going to reveal the location of the bolt, but you can search around the web for clues to its whereabouts.  Needless to say, if you do go on a hunt for this potential key to the Manhattan grid plan, please leave it be if you find it.  (Also, this means you’re a bonafide history geek like me. Congratulations!)

If it’s ever definitively confirmed to be a tool of Randel’s, hopefully the park will provide some kind of protection.  Rarely does one find historical objects in situ.

5 replies on “Marks of the grid: A remarkable find in Central Park”

This past summer I watched one of my children stumble on that bolt and remember tripping on it in my own youth.

A blog claims to have found the second as stated in the article attached. Can anyone confirm this? The blog owner seems to be paranoid that people will tamper with the supposed second bolt.
http://forgotten-ny.com/2012/02/measuring-manhattan/

I found it. Later took my dad to the park and showed it to him. Love stuff like that. 🙂

I found the bolt the other day and took a picture of it. I compared my picture with an earlier one and realized someone hack-sawed off a corner of the bolt. Somehow this vestige of old NY needs to be protected.