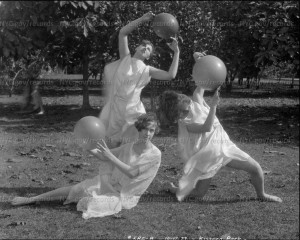 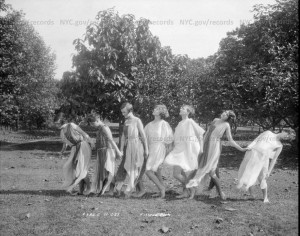 I love flipping through the collections of the NYC Department of Records because, on top of strange crime photographs and rote images of city blocks, you occasionally find images like the ones above.

According to the caption, these female and male dancers are performing in Kissena Park, Queens, in 1927. (In the fall, but they seem appropriate images to celebrate in the spring.) What are they doing exactly? Who knows? Who cares!**

Possibly they are celebrating the fact that Kissena, in Flushing just east of Flushing Meadows, greatly expanded to nearly its present size that year.  But it wasn’t property owners that were celebrating.  The city, grabbing the land in eminent domain, reimbursed landowners one-third of their demanded value.  A state Supreme Court judge approved the sale, adding, “No Rockaway or Florida boom in its wildest dreams ever approached the millions sought by property owners in this proceeding.” [source]

Even more development would come to Kissena with the arrival of *trumpets* Robert Moses, Parks Commissioner!  Kissena would be linked up with Flushing-Meadows a couple decades later, creating a bold ‘Queens corridor’ of parkland — some refer to it as an ’emerald necklace‘ — that could only have been crafted from Moses’ imagination.

In typical Moses fashion, Kissena was later expanded to include a modestly-sized golf course and, in the 1960s, a bicycle velodrome.

Below: Kissena Lake in 1926 which lends the entire park its name 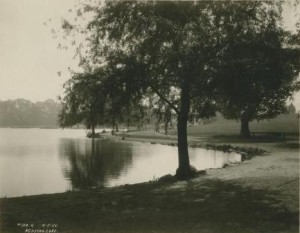 **Another theory is that their dancing is a celebration of the life of Isadora Duncan, who died in a car accident the month before these images were taken, in September 1927.  They seem to be sharing the same effervescent whimsy of Duncan’s famous stage dances, not to mention the same flowy outfits.

Wow—Kissena Park! Thanks for sharing.

I have never been to this park, but was told that it was the one park theat RM actually built the golf course. Whereas all of the other city golf course, Moses intentionally clipped the property lines of private clubs with his “parkways”. As a result, these private clubs soon were either forced into bankruptcy with the cost of rebuilding to replace missing holes or were forced to sell out for a fraction of their value. While I don’t get there often; it’s always fun taking friends to Forest Park and seeing the looks on their faces when they discover the practice green is between the 3rd hole and the 4th tee box.

I went looking at the DA Crime records pictures through the link you have above. Amazing to look at mug shots and realize that all the men are wearing suits and ties. A big change from ones you see today!

– I learned that Kissena park was actually land that was bought off their owners by the city. I think that is pretty cool since I live in queens and have never thought about the origin of this park.
– I don’t think this post goes with any of the units that we have studied, but this definitely relates to the expansion of the city.
– This post used primary sources such as pictures and records from the NYC department of records.
– I wonder if this lead to the Worlds Fair which i know was held in Kissena park.

I ride my bike in this park every day from Kissena Blvd. to Union turnpike and back then 25 laps on the velodrome.