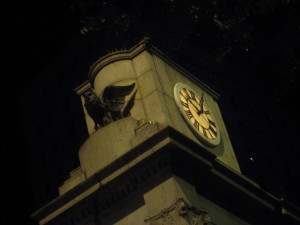 Pic courtesy Brecthbug/Flickr
Bummer. I so wanted the spectacular owl-infested Herald Square clock, once perched atop the offices of the New York Herald across the street, to be a secret meeting portal for the Illuminati.

I facetiously brought up the theory in our December podcast on the history of Herald Square.  Upon the door of the clock, which sits in the northern portion of the plaza, is a strange symbol featuring an owl and stars: 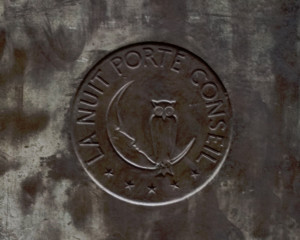 The extravagant James Gordon Bennett Jr., the Herald’s editor at the end of the 19th century, has frequently been linked to the Illuminati.  They say the shadowy, all-powerful organization, with alleged ties to some of the darkest secrets from ancient history, gather to manipulate world affairs only at night. And thus their insignia features the owl — ever vigilant, mysterious and wise.

Bennett was obsessed with owls and festooned his lavish newspaper offices with the bird, many with glowing eyes.  Below: Roof decorations on the old Herald Building, pic courtesy NYPL 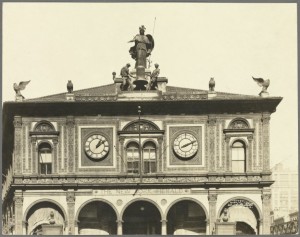 In fact, Bennett had commissioned Stanford White to design a lofty mausoleum for Bennett at his death, featuring an owl 200 feet high, to be placed in Washington Heights!  But when White was murdered on the rooftop of Madison Square Garden in 1906, Bennett’s grandiose plans were scrapped.

Below: The article from the New York Times, featuring a pencil sketch of the proposed owl monument. 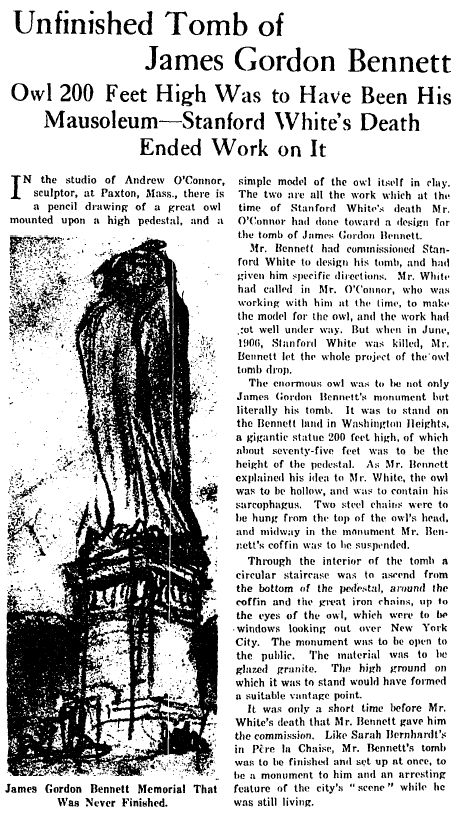 The Herald clock features the goddess Minerva and her trademark companion — of course, an owl.  Like the owl, Minerva herself is frequently represented in Illuminati symbolism.  Adding to the mystery are the names of the two bell-ringers below here, Gog and Magog — entities from the biblical era and mentioned in the Book of Revelation. “When the thousand years are over, Satan will be released from his prison and will go out to deceive the nations in the four corners of the Earthâ€”Gog and Magogâ€”and to gather them for battle.”

So you can just imagine how this has stirred the conspiracy theorist community over the years.  It’s all practically begging for a Dan Brown novel or a Nicolas Cage film.  After all, if miles of underground passages exist underneath Trinity Church in ‘National Treasure’, what could possibly lurk here in Herald Square, beneath Bennett’s old symbol-laden clock?

Alas, one of our listeners Ryan Cox has dispelled the existence of any clandestine passageways with a few well-timed photographs. It seems the door is nothing more than a custodian’s closet! 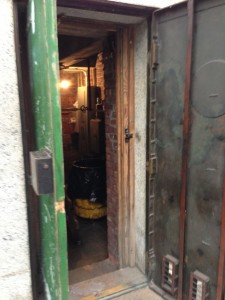 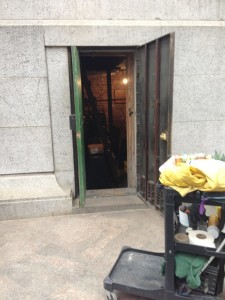 Okay, I mean the realists among you probably assumed this the whole time.

But what if there’s a secret passage behind all the hoses and brooms?  What if Illuminati members step over the mop bucket to get there?

7 replies on “The owls are not what they seem: It appears the clock in Herald Square may not be a portal for the Illuminati after all”

The translation of the inscription is basically “sleep on it”; in other words, don’t make hasty decisions. Ironic, when we all thought it was Illuminati! But I wonder why that was chosen to be put on a janitor’s closet. Has it always been a janitor’s closet?

WHAT BETTER WAY TO THROW OFF ALL THE ILLUMINATI HUNTERS THAN TO DISGUISE THE PORTAL AS A JANITOR’S CLOSET? AND WHY AM I YELLING?

To hear the echo from the tunnels of course! Seriously, a janitor’s closet? There has to be a way to the tunnel(s) from this closet!

– I learned that Minerva is commonly symbolized for the Illuminati and also that owls are also symbols of the Illuminati.
– I feel like this don’t directly relate to any units that we have studied in class but i do find it interesting how New Yorkers are so intrigued in Illuminati and its “Portals”
– This article used primary sources such as pictures form the time period or newspaper articles.
– I wonder if the Illuminati do exist or not… 0_o

Seriously though, the translation from French is “sleep on it”? Is there really one door inside another? Maybe you have to spend the night in there with both doors closed. Or did it one time, who knows what’s been bricked over!