PODCAST A long, long time ago in New York — in the 1730s, back when the city was a holding of the British, with a little over 10,000 inhabitants — a German printer named John Peter Zenger decided to print a four-page newspaper called the New York Weekly Journal. 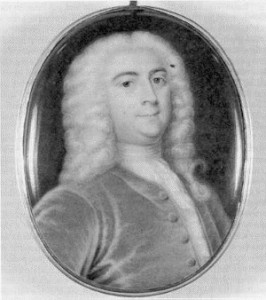 This is pretty remarkable in itself, as there was only one other newspaper in town called the New York Gazette, an organ of the British crown and the governor of the colony. (Equally remarkable: Benjamin Franklin almost worked there!) But Zenger’s paper would call to question the actions of that governor, a virtual despot named William Cosby (at right), and in so doing, set in motion an historic trial that marked a triumph for liberty and modern democratic rights, including freedom of the press and the power of jury nullification.

This entire story takes place in lower Manhattan, and most of it on a couple floors of old New York City Hall at Wall Street and Nassau Street. Many years later, this spot would see the first American government and the inauguration of George Washington.

But many could argue that the trial that occurs here on August 4, 1735, is equally important to the causes of democracy and a free press.

And somehow, we manage to fit Kim Kardashian into this.

CORRECTION: I can’t read my Olde English very well.  In reading from a page of the New-York Weekly Journal, I inadvertently say ‘Fulgom Panagenics’ instead of ‘Fulsom Panagenics’. Fulgom is not a word, fulsom(e) is, meaning very complimentary or flattering. 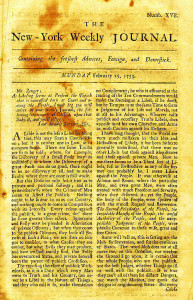 Andrew Hamilton, the lawyer who saved the day in the John Peter Zenger trial. His eloquence and command of language helped win the day for lovers of free press. 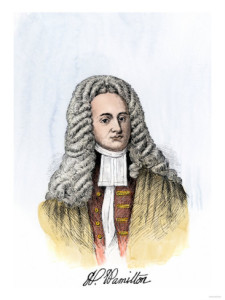