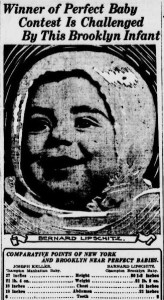 The exaltation of fat, plucky babies via beauty contests stems from a rather grim origin — American infant mortality rates of the 19th century.  During the 1880s, as swelling immigrants and overcrowding in New York created harbors for disease and malnourishment, over one in five infants would die in America, with higher occurrence among poor or minority populations.

Although people have always adored looking at cute babies, the criteria for a ‘perfect baby’ in 1913 involved body form, fat and general disposition.  Baby pageants were a common place feature in Coney Island parades, with stunned and perplexed infants laid in small floats and pulled along the avenue to great acclaim.  (This second place winner from a 1923 parade doesn’t look too pleased.)

Below: Annoyed babies on display in a June 1914 Grand Automobile Baby Parade.  (This is obviously a photo montage, and, by the way, the original caption for it is super depressing. Read it here if you want.) 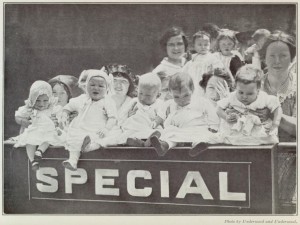 In 1913, with New York City relishing the results of two decades of City Beautiful architecture, so too did they honor the beauty of their offspring.  It even offered an opportunity to rekindle the famous Manhattan-Brooklyn rivalry that so made the Consolidation of 1898 so contentious, when, on April 17, 1913, the New York World declared that the winner of a Manhattan Perfect Baby contest had been challenged by a Brooklyn tot. 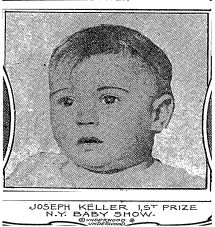 Young nine-month-old Joseph Keller (at right), residing with his German-Irish family at West 136th Street in Manhattan, won a contest held by a local public school, in a culmination of the city’s Better Babies Week, an effort by public health advocates to promote infant health, providing ‘milk stations’ and doctor consultations throughout the city.

The unabashed celebration of gorgeous children — with a mind towards public education — electrified the city.  The program was such a success that it was greatly expanded the following year.  “Baby week has done to New York’s attitude towards babies what a large, active firecracker placed under the chair of a dozing grandfather might be expected to do,” said one journal in 1914.

Keller was chosen from dozens of babies whose mothers showed up at a milk station during Better Babies festivities. Babies were evaluated based on precise guidelines, almost as one judges an animal at the Westminster Dog Show.

Another article makes note, to the detriment of Mr. Keller, that “it was not the prettiest baby that got the prize” but rather one with the healthiest and most ideal physique.

But the mother of Bernard Lipschitz, of 1526 Eastern Parkway in Brooklyn, begged to differ.  “In Brooklyn, there are babies that can equal if not excel the record set by the prize winner Joseph Keller,” she said to the Evening World in an article on April 17, 1913.

“He certainly looks like a prize winner!” the Evening World remarked of Lipschitz, regaling his superior qualifications.  In every aesthetic but one, baby Lipschitz was the superior candidate, with Keller’s only saving grace being his number of teeth — 6 to Bernard’s 2 . “Let Joseph hug that consolation to his soul.” [source]

And now, one hundred years later, what say you — Joseph vs. Bernard?

Below: From the 1914 baby drive, heavily supported by new mayor John Purroy Mitchel. 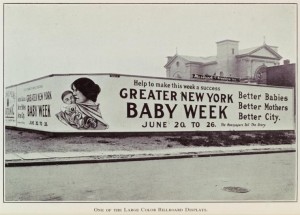 Pictures courtesy New York Public Library, except for images of Joseph and Bernard.

1 reply on “Dueling ‘perfect babies’ in Brooklyn and Manhattan, pageantry in support of healthy infants in New York”

I wonder how one judges a potent nose?