May 1st used to be the day that yearly apartment leases ended, resulting in a fury of chaotic furniture relocation known as Moving Day. The April 25, 1897 New York Tribune insert below gently lampoons the event. 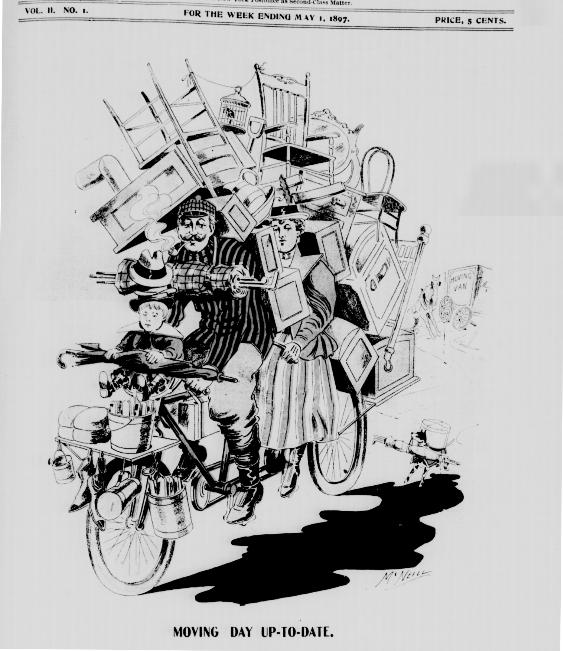 This was really the worst traffic day in New York each year, as thousands of people shuffled around with their possessions. The first moving services for hire were essentially Long Island farmers with wagons to rent.

By the 1860s, the custom was so ruefully installed into the calendar that people accused a collusion of ‘carmen’ (van operators) of keeping up the practice as they could naturally increase prices doing the weeks before and after May 1. (Consider it a 19th century version of Uber-style ‘surge pricing’.)

Lots along the expanded elevated railroad were especially busy on Moving Day in the 1890s, as people from lower Manhattan began migrating to northern areas, including the Annexed District of the Bronx. In Brooklyn, which was still an independent city, people fled the packed downtown areas and moved to relatively isolated areas within the city limits.

“Many people who have been paying for lots in the outlying districts ever since the elevated roads were pushed through, and who have erected houses in the past year or so, selected today as their moving day and a great many small houses in the suburbs are inhabited this afternoon for the first time.”  (Brooklyn Daily Eagle, May 1, 1891)

So what happened to Moving Day?  The subway changed everything, basically, as did the construction of new homes in boroughs outside of Manhattan.

By 1913, the Evening World discovered: “[t]he rapid transit facilities have enabled hundreds to move further out, and east side landlords say they have more vacant apartments than ever before. Hence rents are cheaper and fewer are unable to pay up.”

Somebody should tell JL Kesner’s Department Store on Sixth Avenue between 22nd and 23rd Streets. Their 1913 advertisement in that same issue featured the following: 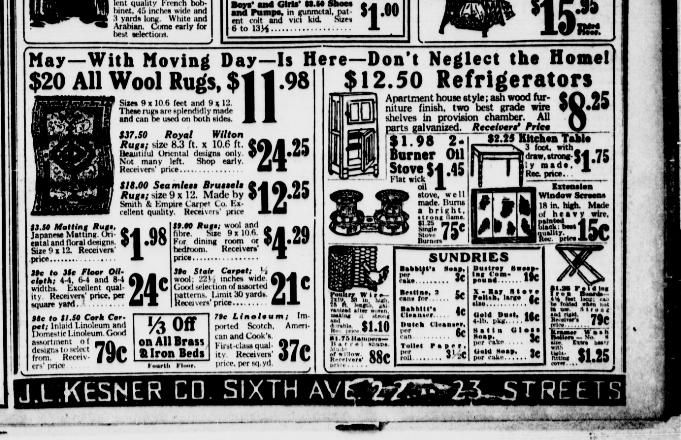 At top: Even Hogans Alley (and the Yellow Kid) are not immune to the inconveniences of Moving Day!

Are you guys getting many of the old newspaper clips that you post on the blog from the NY Public library archives, or from the web? As this New Yorker now lives in So. Cal. can I find old articles like these as you two do?

Since discovering you guys late last year, I finally got caught up on all the podcasts and now cannot wait until the next new one that I will listen to at work this week. YAY!!!!! I am wanting to start re-listening to some of MY favs and they are all train related.

Are there some things that still exist in Queens that have any history to it? Just wondering.

Thanks to you both for this fun walk back in time to the greatest city in this country: NYC!!!!!!!!!

Rich Pollock
A Proud New Yorker on the west coast.

Haha! I love the old ad at the end. I wonder if they used interstate moving companies back in the day. I’m sure it would make moving a whole lot easier!