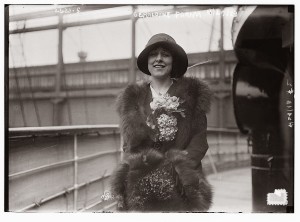 The Metropolitan Opera’s soprano sensation Geraldine Ferrar, photo taken April 1913. I guess fur was never out of season a century ago!

“When You Done Your Christmas Furs — It will be an added pleasure to know they came from Gimbels — the house with the time-honored experience in Furs — for surely it requires more than simply workmanship to produce a good fur garment.  GIMBELS seventy-one years’ experience  has resulted in the accurate knowledge as to how to properly select the skins.”

Some of the furs sold at Gimbels for the holiday season in 1913 — wolf, muskrat, skunk raccoon, lynx, lamb, stoats (otherwise known as ermine), several kinds of fox, beaver and ‘tiger-dyed coney’ or rabbit skins dyed to resemble exotic animals.  You could get coney skins in zebra and leopard prints. 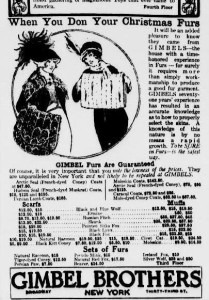 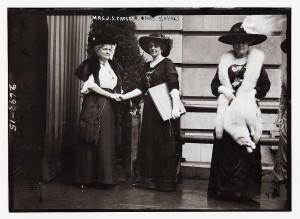 Eugenie Mary “May” Ladenburg Davie, noted Republican activist in New York and a director of the Pioneer Fund.  She was apparently a bit of a political spitfire, even while draped in the latest fashion. 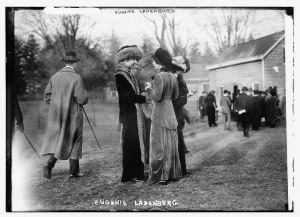 Suffragists at the Armory, January 1914 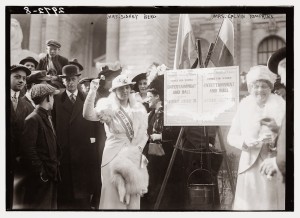 It’s even suitable beach wear! A group of friends at Coney Island, January 1915 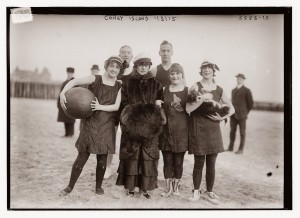 From the studio of New York portraitist Theodore C Marceau, 1906 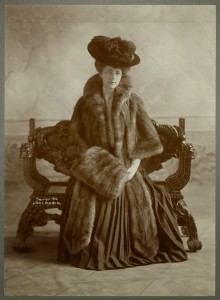 Gimbels not only sold furs; they stored them for you in the summertime. Can’t have a frock made entirely of animal skin just sitting in your closet!