But the void of history-related television will soon be filled again with Turn, AMC’s Revolutionary War-era drama on George Washington’s spy network, called The Culper Ring.  What do you think?

Although this clearly depicts a variety of locations pivotal to the American Revolution, much of Washington’s spy ring was located near British headquarters — namely New York and the surrounding area.  So the show should eventually turn its attention to the city in the Revolutionary era.

We’re sure to see not only the bustling, over-crowded streets around St. Paul’s Church and Bowling Green — possibly even the ruins from the 1776 fire which incinerated almost a fourth of the city — but imagined locations in Long Island and Westchester.

You’re not seeing things — that’s Jamie Bell (aka Billy Elliott) as the leader of the spy ring Abraham Woodhull (aka Samuel Culper).

They’ll certainly take a lot of liberties given the secrecy of the Culper Ring.  I can’t wait to see how they depict the most intriguing alleged member of the gang — Agent 355.  The show is set to air in early 2014.

And although though it’s not set in New York, if you like history and mobsters, check out Mob City tonight on TNT, set in Los Angeles in the 1940s and based on John Buntin’s excellent book L.A. Noir: The Struggle for the Soul of America’s Most Seductive City.

——
And speaking of George Washington, today marks the 230th anniversary of the General’s farewell speech to the officers of the Continental Army, given at Fraunces Tavern just days after the British were permanently expelled from New York in 1783.

His toast to his men: “With a heart full of love and gratitude, I now take leave of you. I most devoutly wish that your latter days may be as prosperous and happy as your former ones have been glorious and honorable.”

There was not a dry eye in the house.

For more information, give our podcast on Fraunces Tavern a listen. The building has a fascinating, even dizzying history. 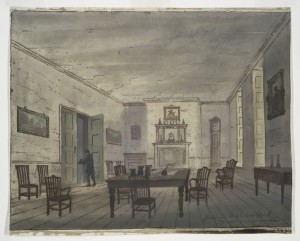