Presented without commentary, from the front page of Â the New York Sun, January 24, 1914: 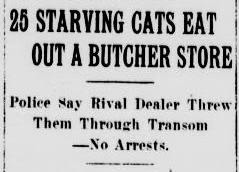 Kenny, remembering that a bomb went off in front of this same market six months ago and blew the store front to pieces, blew his whistle and thumped his night stick for assistance. Â  Seven other patrolmen came running.

They stole up to the door with pistols pointed. Â They lunged together and burst in. Â Twenty-five cats fled at their approach. Â The cats were of all sizes and colors. Â They had been hungry, but were no longer. Â They had eaten every scrap of meat in the market — chicken and beef and everything else, and were fighting over the bones.

The eight policemen pocketed their pistols but swung their clubs. Â They also said ‘Scat!’ and the cats ran into the street and scurried through the East Side with great news for their tribe. Â There were no arrests.

The police suspected that some rival butcher had collected the cats, Â starved them and thrown them through the transom of the Brighton Beef Company’s store.” 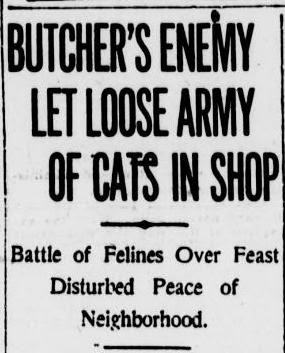 And excerpts from a similar story in the Evening World from the same day:

“[T]he owner has two cats of his own, trained to eat no meat, which he always leaves in the shop overnight.

The first peripatetic pussy that was pushed through the fanlight was pounced upon by the faithful feline guards of the pork chops. Â They grabbed him and sought to shove him into the sausage chopper. Â But other felines came through the fanlight. It began to rain cats. Â The guardians of the garbage cans made short shrift of the tame tabbies of the butcher shop.”

What the Sun story fails to report is that a young man was pushed through the fanlight before the cops stormed the shop.

“The policemen couldn’t open the door. Â They shoved Tommy Laura, a young man of James Street, through the fanlight. A dozen cats scrambled over Tommy when he fell to the floor. Â He turned up the lights and got a pair of pliers with which he opened the door…..”

One man had to be taken to the hospital when he grabbed the tail of a cat perched upon a meat hook.

Cats and butcher shops, clearly, do not mix!

Below: Do you trust this cat with your perishables? It’s a cat and two dog companions in Flatbush, circa 1900s, photographed by Daniel Berry Austin, courtesy the Brooklyn Museum 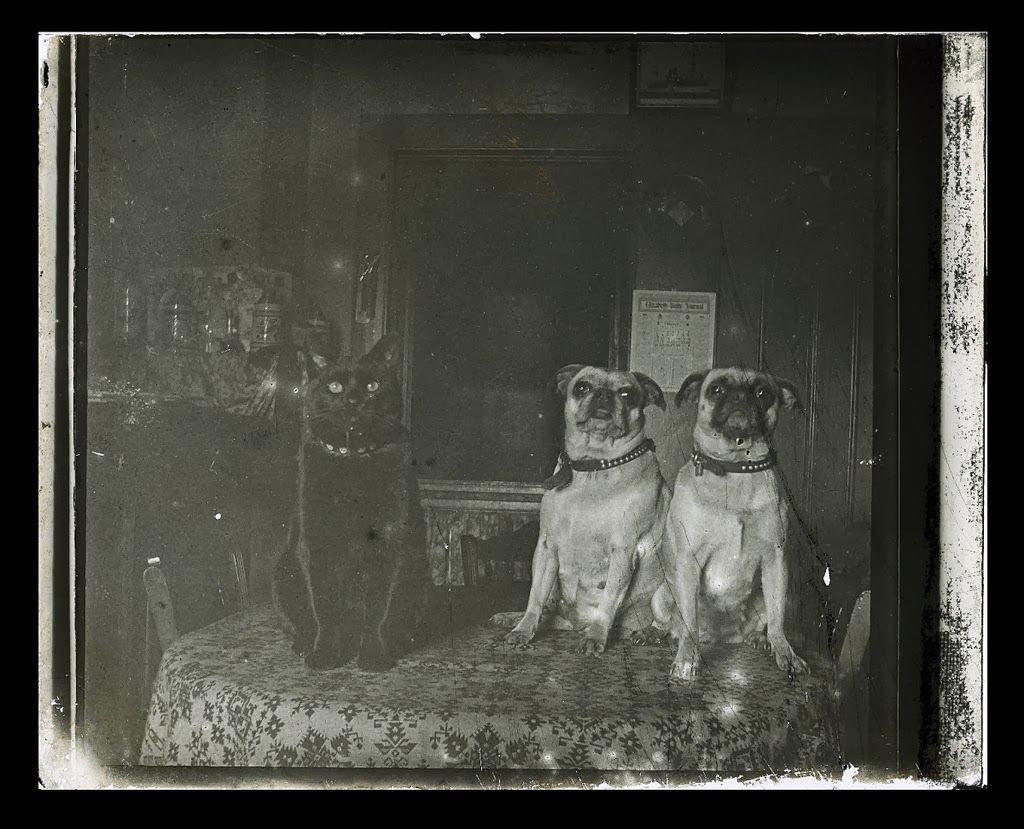 This is the stuff you just can’t make up. +1 for history!
I’m saddened by the lack of portable pocket-sized video recording devices at this point in time.

[…] as good a time as any to shine a light on a cat-centric 101 year old local news story! Via Bowery Boys History, this historical cat tale ran in the January 24, 1914 edition of the long-defunct New York Sun. It […]