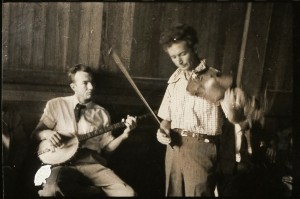 “I have sung in hobo jungles, and I have sung for the Rockefellers, and I am proud that I have never refused to sing for anybody.” — Pete Seeger

Pete Seeger had a television variety show in the 1960s called Rainbow Quest, filmed from studios in Newark, New Jersey.  Interestingly, the shows were broadcast on WNJU, better known as a Spanish-language station and today the flagship for Telemundo!

Luckily, many of these programs are available to watch on YouTube. Here’s a clip of Seeger with BJ Reagon (from Sweet Honey In the Rock) and Jean Ritchie (aka ‘the mother of folk):

In 1974, he recorded the first album for Sesame Street to feature new material not featured on the show. Here, he duets with Oscar the Grouch about, of course, ‘Garbage’:

A great guy and I think he was censored and ostracized in the fifties. Like Mandela,
now an Icon!