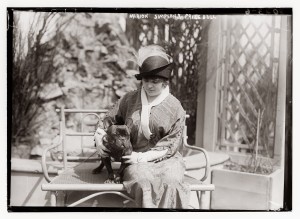 — Do you like Downton Abbey?  I’ve started my Sunday night Tweet-alongs with the show, currently starting its fourth season broadcast in the United States on PBS.  As I do with Mad Men and Boardwalk Empire, I’ll be Tweeting historical details pertinent to that week’s episode. But I promise — no significant plot spoilers!  A couple sample Tweets can be found at the bottom of this post.

— Hart Island has been New York City’s potter’s field for almost 150 years.  Could it one day become a park? That’s one possible suggestion for making this forlorn, unpopulated spot off the east side of City Island.  [Curbed]

— The oldest Barnes & Noble bookstore in America — at 105 Fifth Avenue — quietly closed its doors this week.  The bookstore franchise traces itself back to a New York bookseller from the late 1880s. [Gothamist]

— A rare preservation victory in Times Square — A decorative building once home to a classic shoe store for Broadway stars gets a fancy new shine after it’s vacated by TGI Friday.  [Scouting NY]

I wrote about this building a few years ago:  “You can still see Miller’s slogan etched into the marble — The Show Folks Shoe Shop Dedicated to Beauty in Footwear.  Sitting into the walls below are four statues of Broadway muses, four major stars of the stage when they were carved in 1929 — drama icon Ethyl Barrymore, musical muse Marilyn Miller, operetta diva Rosa Ponselle and film’s biggest female star Mary Pickford (yes, that’s really her, in drag as Little Lord Fauntleroy). ”  [Ultimate Flair: TGI Friday’s four Broadway Goddesses]

— And our new podcast will be available this Friday! Prepare for some good old fashioned riots and a march through salty marshs.

Some Tweets from last week’s episode of Downton Abbey:

The Dansant, ‘in town’ at the Jubilee, French for ‘tea dance’, came into prominence in England in Victorian era. #DowntonPBS
â€” The Bowery Boys NYC (@BoweryBoys) January 6, 2014