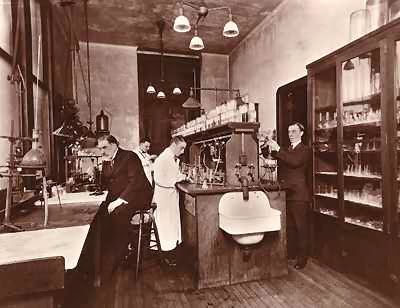 Charles Norris and the toxicology laboratory at Bellevue Hospital [source]

“In 1922 101 New Yorkers hanged themselves.  Four hundred forty-four died in car accidents.  Twenty were crushed in elevators.  There were 237 fatal shootings and 34 stabbings.  And that year, nine hundred and ninety-seven New Yorkers died of poisoning.”

The ominous statistic above — which opens The Poisoner’s Handbook on PBS’s American Experience — reveals one of the ugly side effects of modernity.  Industry often used chemicals without fully understanding their deadly effects.  Children routinely played in areas heavily coated in rodenticides like Cyanogas.  Meanwhile, diabolical individuals, more knowledgable of poison’s profound powers, employed them in criminal ways, confident of the difficulty by early coroners and law enforcement to accurately trace them.

Some deaths by a certain poison could be identified by early forensics, but intent was frequently unclear.  Did a drunken man kill his neighbor or was it death by carbon monoxide?  Did a father kill off his family with thallium, or was it a dreadful accident?  What was causing the gruesome deformities and deaths of women at a local watch factory in New Jersey?

Not helping matters was the corrupt nature of New York’s early investigative teams, a carnival of unqualified men often placed into office by Tammany Hall and paid by the number of bodies they processed.  Deaths by poison were frequently overlooked and misidentified, thus turning it into an attractive weapon of murder.

Into this chaotic, frightening world steps the innovator Charles Norris (above), New York’s first chief medical examiner, and his leading toxicologist Alexander Gettler, who set up their laboratories at the city morgue at Bellevue Hospital.  From here, their team delved into a completely new world of crime detection, attempting to locate killer toxins within the body tissue of the dead.  Unbelievably, their jobs are made more difficult by New York mayors, from John Hylan, who objected to Norris’ use of autopsies in solving crimes, to even Fiorello LaGuardia, who accused Norris of embezzlement.  (Quite the opposite; Norris paid his toxicologists out of his own pocket. ) 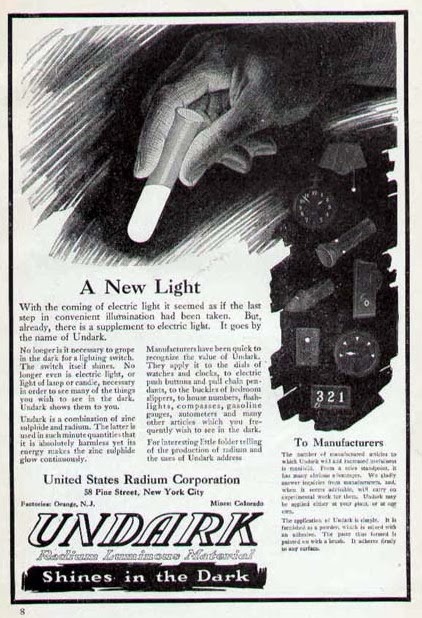 One event brought poison into a more sinister spotlight — Prohibition.  With the elimination of liquor sales, people ran to the speakeasies, where a lesser quality, more toxic brew was being served. In some cases, it was the government itself who was selling poisonous potions, as with the failed experiment called the Bridge Whist Club.  “Realizing that many bootleggers stole industrial alcohol to make their product, enforcers directed that the industrial stuff be polluted with Methanol, hoping the foul taste and physical illnesses would deter consumption.” [source]

Norris, Gettler and their team at Bellevue, innovating forensics techniques that identified the effects of poisons upon the human body, were responsible for greatly decreasing crimes by poison and for improving worker’s safety in plants which used chemicals and fuels in their daily routine.

At right: Radium made watches glow in the dark and became a devastating killer at a New Jersey factory

This truly dark PBS documentary, a terrific realization of the book The Poisoner’s Handbook: Murder and the Birth of Forensic Medicine in the Jazz Age by Deborah Blum, plays out like a condensed anthology of Jazz Age mysteries, arranged by poison type within a macabre medicine cabinet.  Illustrating the narrative are a collection of dazzling photographs (many from New York’s Department of Records) and better-than-normal live action set pieces.

This is a nail-biting film, shamefully fun actually — a blueprint for the modern television procedural, so much so that I’m rather surprised that somebody hasn’t developed The Poisoner’s Handbook into a regular television series.  Some of the poison deaths here seem so outlandish that they make a typical episode of CSI: Crime Scene Investigation seem rather pallid in comparison.

There’s even a recurring villain of sorts, a woman named Fanny Creighton who the media grimly nicknamed Borgia (for Lucrezia Borgia).  I won’t tell you what various crimes she’s guilty of, but I will say, do not ever go out and have a cocktail with her.