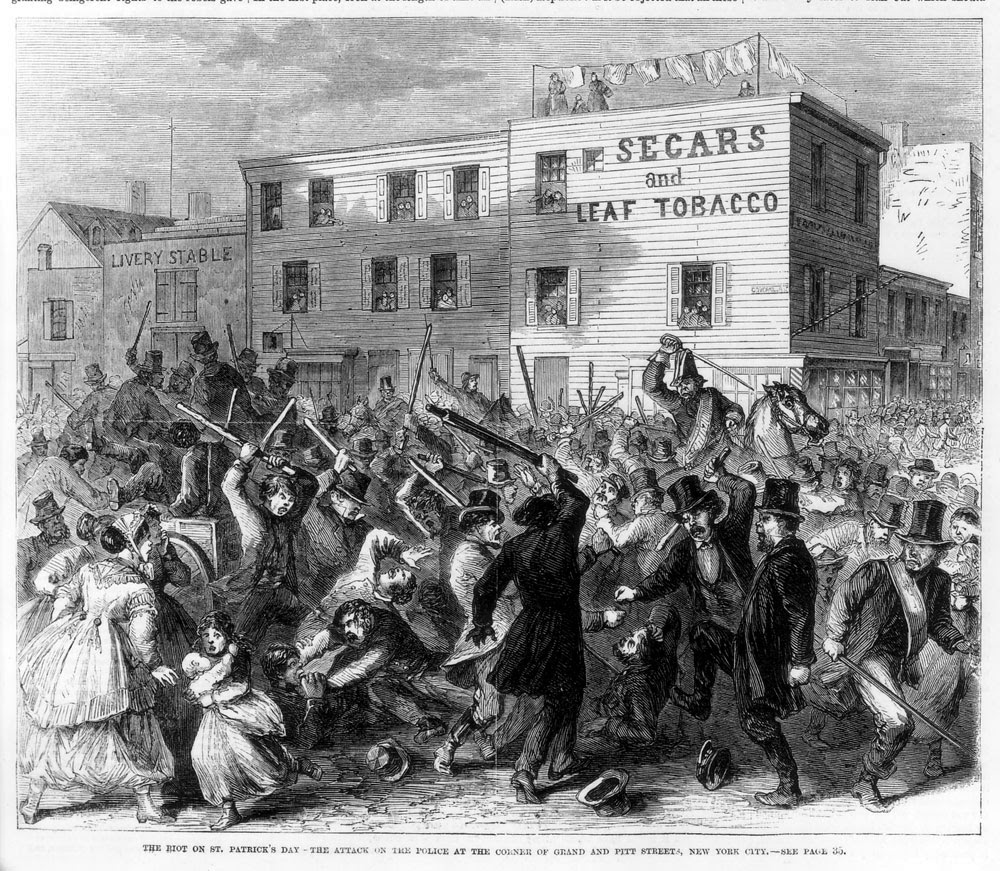 Frank Leslie’s Illustrated Newspaper reported on a ‘riot’ which occurred on Saint Patrick’s Day 1867 at the intersections of East Broadway, Grand and Pitt Streets, one block below Delancey Street and the Williamsburg Bridge (which was decades from being built by that date).

The parade began on East Broadway, with regiments assembling here (“slush and snowdrifts … disregarded”) to march throughout the city.

A bit after noon, a wagon driver, hemmed in by mounds of snow, got caught at Grand and Pitt street, blocking the parade route.  He was immediately set upon by angry marchers.  When a police officer interceded to protect the driver, he, too, was assaulted, “knocked down and severely injured by being trampled upon.”

Other officers arrived, and soon Grand and Pitt was the scene of senseless violence.  “The Hibernians broke their staves of office and used the fragments as shillelaghs and clubs, with such effect, that the officers were the recipients of several ugly scalp wounds and bruises.”  Another report lists the unique weaponry as “sword canes, society emblems and other missiles.”  One officer was wounded with a sabre. Soon the street corner filled with policemen, and the violence subsided. [source]

The whole event seemed to last no more than thirty minutes.  But the New York Times, a fairly anti-Democrat, anti-Irish paper in the mid 19th century, was truly outraged: “We trust there is no Irishman or Irish American, outside of a small lawless minority, that does not feel keenly the disgrace brought upon such celebrations as that of yesterday, by the wanton and brutal assaults upon the Police.”

The New York Times of 1867 is not to be relied upon for an impartial account of any disturbances involving the city’s Irish residents. Unfortunately, it is the only paper which has an archive for that period available online. Anything published in the Times in this period has to be taken with more than a grain of salt. This was a neighborhood in which the local Irish Catholics had to defend their parish church (St. Mary’s, which is still standing a block away from the scene of this supposed “riot” ) against Know-Nothing mobs intent on burning it down.

One reason I never liked the NY Times…

The NY Times still has this attitude.

As late as the 1980s, a headline on the parade read, “Drunken Irish Youth Day”, a clear stereotype it would not use with any other ethnic group.

During the same period, imprisoned Irish Freedom Fighters were on hunger strike for nearly a year demanding fair treatment from the Thatcher government. Ten died, including Bobby Sands, an elected member of Parliament.

Yet not once did the NY Times publish his photo, even the day he died, as is to deny his humanity.

There was a Times reporter in the 80s, Jo Thomas, who actually wrote unbiased reports regarding the struggle of the IRA against British occupation – a stark change from the usual pro-British line the Times parroted.

When the Brits complained, she was fired, and the usual anti-Irish reporting returned.