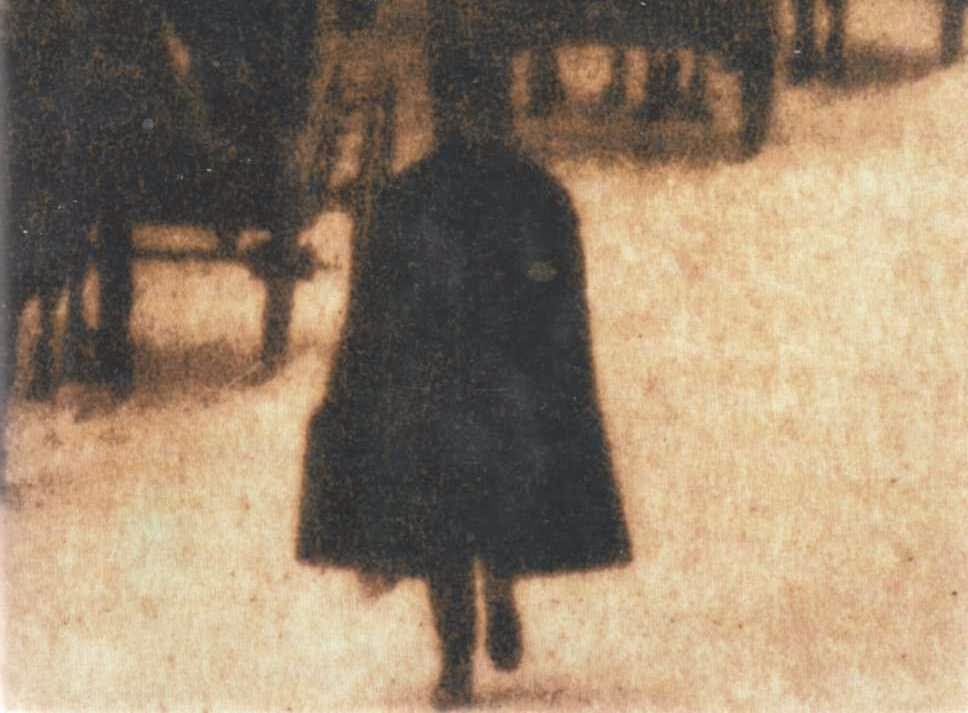 NOTE: This article has a few plot spoilers but no major twists are revealed or discussed.  I’ve tried to write the descriptions within the interactive map as vaguely as possible.

The Alienist by Caleb Carr was published 20 years ago this week, an instant best-seller in 1994 that has become a cult classic among history buffs.  Despite some creakiness uniquely inherent to early ’90s fiction thrillers, it remains today a page-turning and utterly spellbinding adventure.

Although the Jack the Ripper murders were an obvious inspiration for Carr, perhaps The Alienist‘s biggest influence is The Silence of the Lambs by Thomas Harris.  Carr completed his tale of serial murders in the Gilded Age just as a slew of Silence knockoffs began hitting the bookshelves.  The Alienist stands far above the pack, of course, but you can’t deny its success in 1994 was partially inspired by reader’s cravings for murderers with perverted tastes and body parts in formaldehyde jars. 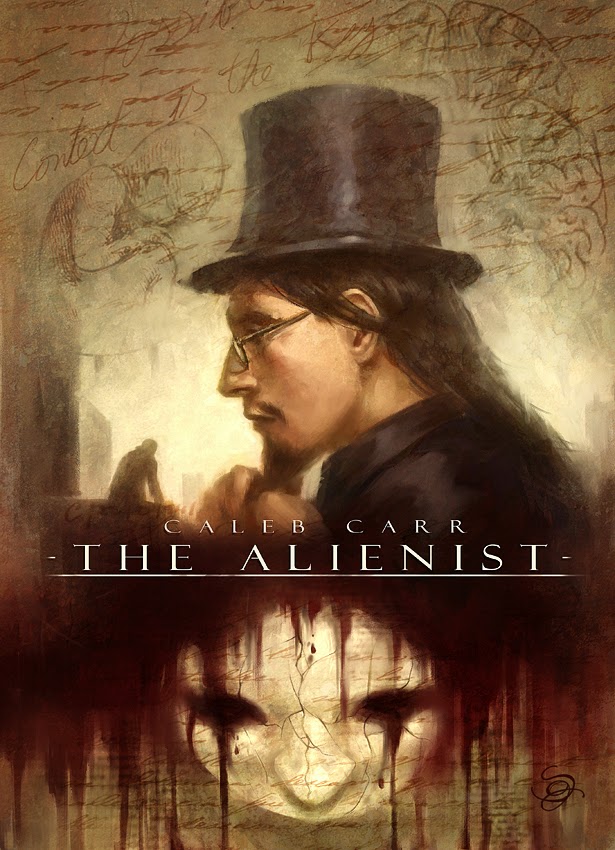 The Alienist follows a quirky team of investigators in 1896 as they follow the bloody trail of a killer with a peculiar penchant for boy prostitutes, often dressed as girls to the delight of their clientele.  Dr. Laszlo Kreizler is the alienist (or psychologist) in charge of the case, stitching together a profile of the loathsome figure, conveniently using soon-to-be standard analytic techniques.

At right: Alternate artwork for The Alienist (Courtesy Nerd Blerp)

As protagonist John Schuyler Moore, a reporter for the New York Times, explains it “[W]e start with the prominent features of the killings themselves, as well as the personality traits of the victims, and from those we determine what kind of man might be at work. Then, using evidence that would otherwise have seemed meaningless, we begin to close in.”

Carr’s book is finely detailed, perhaps overly detailed, which won’t be a problem if you love New York City history.  There are over two dozen scenes at various notable landmarks throughout Manhattan, some in various states of construction.  Several real-life figures make appearances, although the most entertaining characters are Carr’s own, including the intrepid proto-policewoman Sara Howard and scrappy errand boy Stevie ‘Stovepipe’ Taggart.

When I first read The Alienist back in 1994, I was struck by its preciseness, an expertly placed breadcrumb trail through old Gotham.  There is no romantic gloss, as in another history classic Time and Again. He makes it seem possible to retrace almost every step of our heroes. (In researching this article, I tried to do so.)  The original New York Times review noted that “[y]ou can practically hear the clip-clop of horses’ hooves echoing down old Broadway.”  They’re still echoing.

The story begins in the early months of 1896 during a robust winter. Below, from the Illustrated American, a depiction of a snowy Madison Square that year (NYPL): 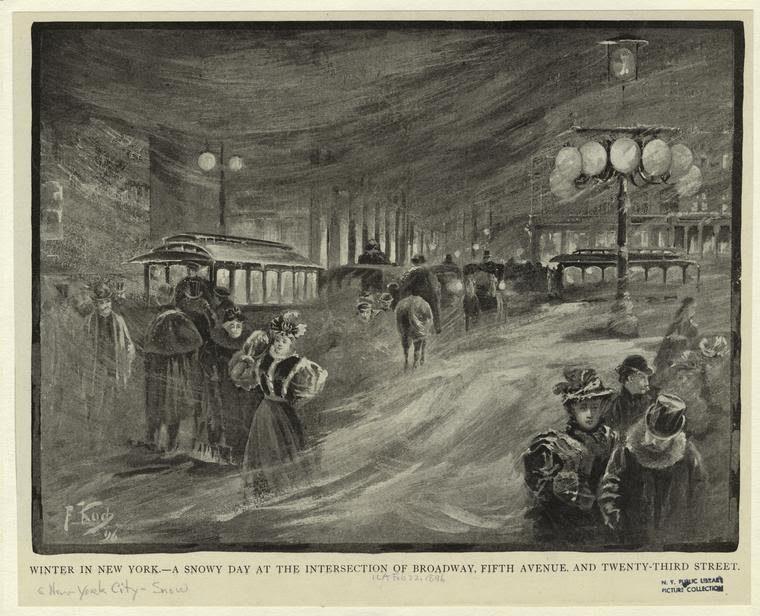 His depiction of old New York is still glorious.  The book’s polite take on certain social issues, however, read a bit wobbly today.  To his credit, Carr tackles police corruption, gender discrimination, racial prejudice and the plight of homosexuals, all while elaborating on complicated psychological theories in service of an entertaining story.  He has stuffed a hidden epic of New York into the framework of a modern murder mystery.  That he chooses to handle hot-button social issues with kid gloves is not a misstep, but merely a symptom of its genre and day.

The Alienist is still greatly enjoyable, perhaps slightly more so now.  Thanks to renewed interest in New York City history, the details here are even more shimmering and vital.  This is not an old New York emerging from a mysterious fog, but a world that seems to exist alongside our own.

And to prove that — below you will find a detailed, interactive map of the pivotal locations used in the book.  You can click into various points for further details.  A few of these pins have pictures and other links. Just zoom in and choose a location!  (NOTE: Some locations are approximate and a couple are speculation.)

A little elaboration on certain elements of the book’s bigger places and themes:

Paresis Hall
Most of the murder victims are boy prostitutes employed as several houses of ill repute throughout the city.  Paresis Hall, located steps from Cooper Union, sounds like it was both a place where gay men could congregate in private clubs and a place of sexual transaction, often (as in the book) with underage boys dressed up as girls.  This boy, Nathaniel ‘ The Kid’ Cullen, may have worked there, or may have just a habitue of the club. (He appears in this collection of photographs from Paresis Hill.) 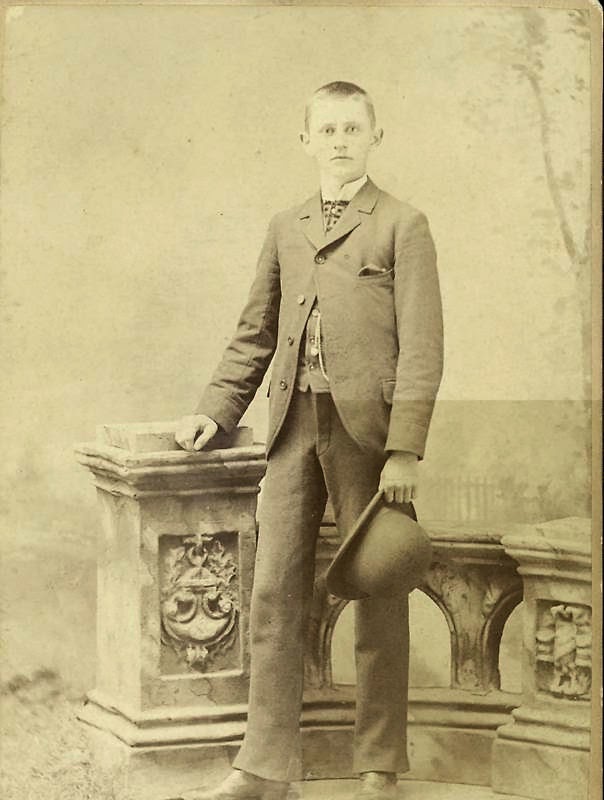 Madison Square
This was still a thriving center for culture and dignified entertainments in 1896. Many theaters clustered around the park, although newer stages were making their way up Broadway to Herald Square.  If Delmonico’s (on the northwest corner) is too crowded for you, head over to the tea room at Madison Square Garden on the northeast side.  Pictured here in 1893, three years before the events of the Alienist. (NYPL) 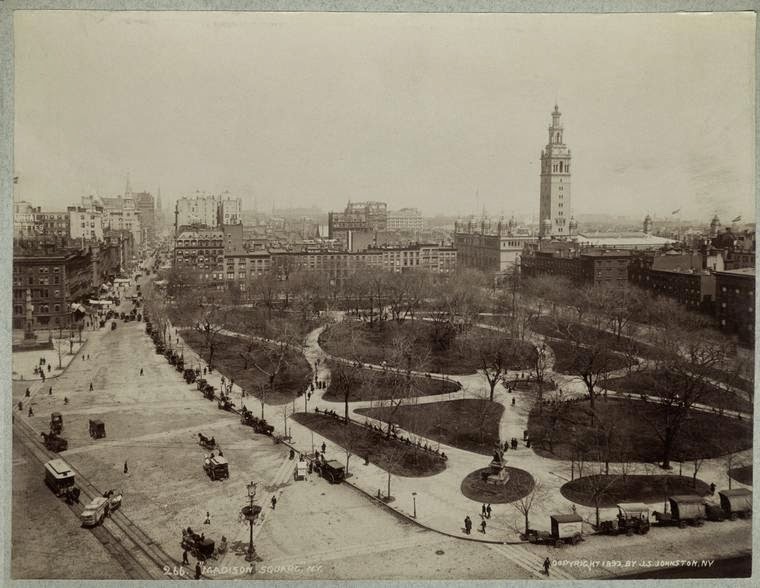 Murray Hill Distributing Reservoir
In 1896, New York still relied on this reservoir to provide most people with water.  But it was also a tourist destination in itself, with walking paths along the top.  Shortly after its appearance it the book, the Egyptian-inspired reservoir was torn down to make way for New York’s new public library. (NYPL) 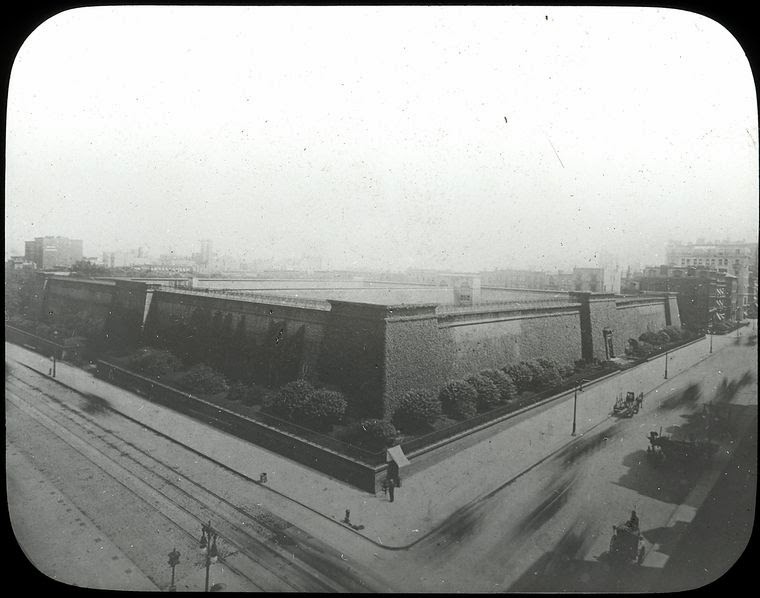 Bellevue Hospital and Morgue
Check out our podcast and blog posting on the history of Bellevue Hospital, as many of the details mentioned there appear in this book.  Below: Bellevue in 1879. 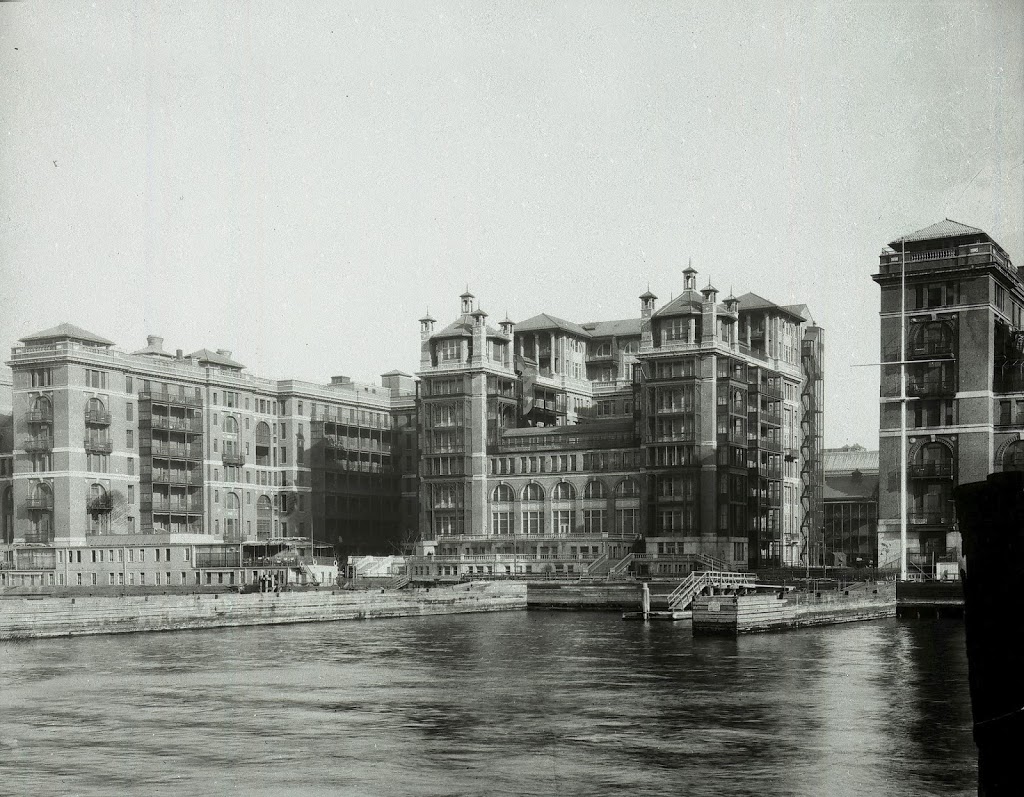 Isabella Goodwin
Sara Howard seems to be a little bit Nellie Bly, and a lot Isabella Goodwin, the first female office promoted to detective in 1896 (the year the book is set).  Below: A front-page case cracked by Goodwin from February 1912. 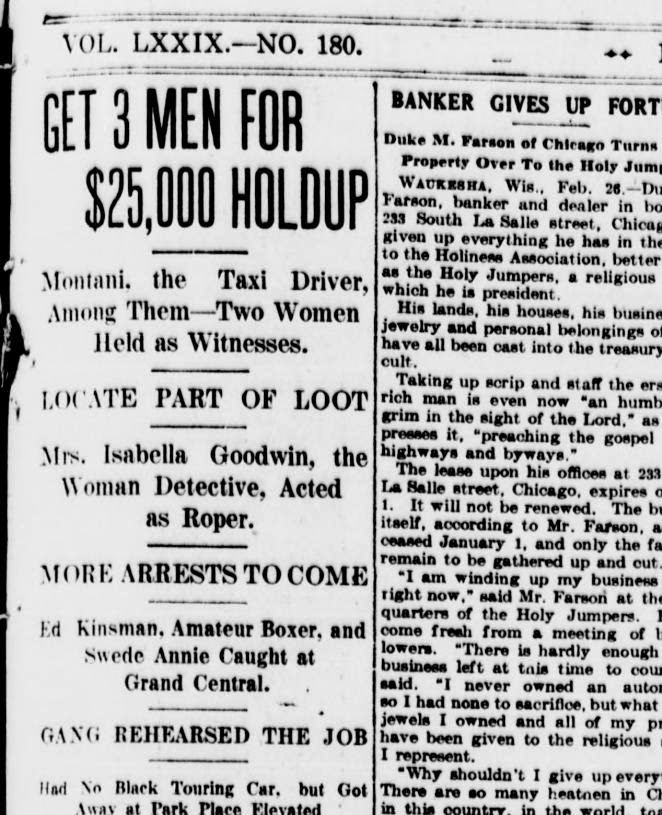 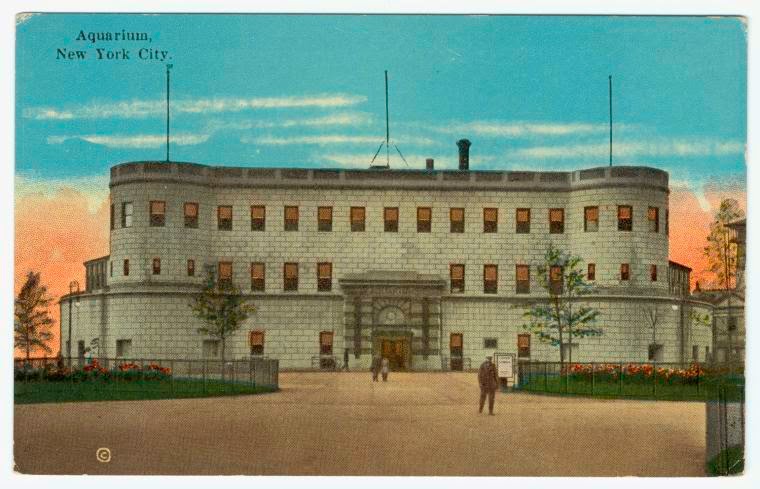 Theodore Roosevelt
Carr weaves several real life figures into the storyline, from J.P. Morgan (who comes off quite ominous) to Jacob Riis (not a flattering portrait of him either).  But future president Roosevelt gets a glowing supporting role as New York’s police commissioner who directs Dr. Kreizler, Moore and Howard to investigate the murders using powers of psychological deduction.

In fact, the book is actually a flashback by our hero Moore, recalled when he visits the Oyster Bay funeral of his dear friend in 1919 (pictured below). (LOC) 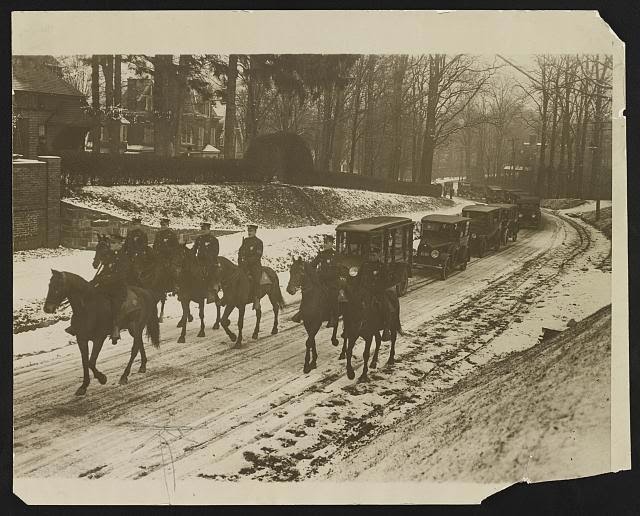 True Crime
And there are a great many real-life figures from New York’s criminal underworld as well.  In fact, most of the lecherous and notorious figures depicted in the book are real folks, from early gangsters like Paul Kelly to brothel owners such as Biff Ellison.  Carr also finds a few disturbing mental cases to bring into the story, including the young killer Jesse Pomeroy (pictured below), considered one of the most brutal of murderers at a ripe age of 14. 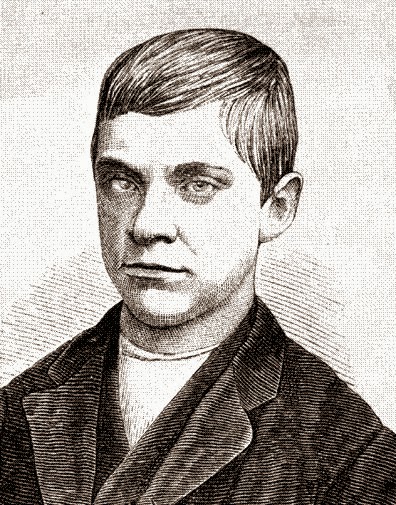 Grand Central Depot
The characters do venture to places outside the city for further clues, but they always come through Grand Central Depot, the most hectic place in New York.  (Pennsylvania Station had not yet been built.)  Within a few years, this too would be ripped down and replaced with the present Grand Central Terminal. (LOC) 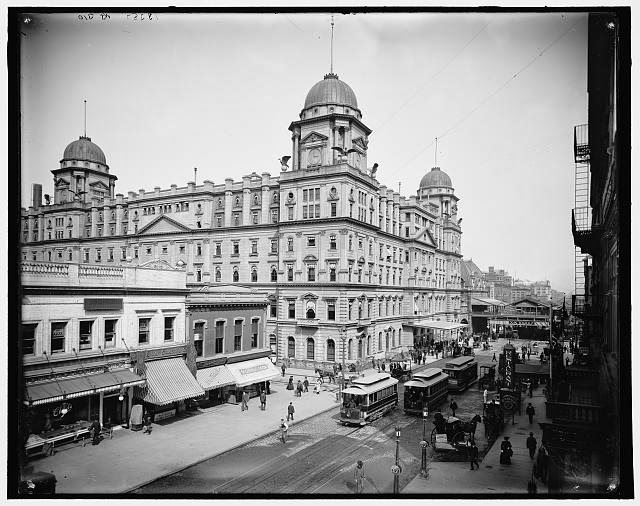 And finally, there are three central locations from the book that are still around today:

Dr. Laszlo’s residence at Stuyvesant Park. Actually the address in the book doesn’t really exist.  But based on a couple descriptions — and its proximity to St. George’s Church, which is mentioned as close by — this building at 237 East 17th Street may be what Carr had in mind: 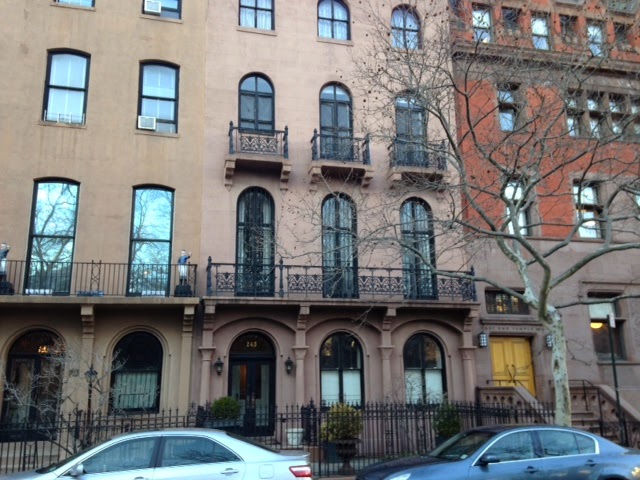 Murder headquarters at 808 Broadway — This exceptionally handsome building was constructed by James Renwick, playing nicely off its neighbor Grace Church.  It’s actually called the Renwick!  The team was located on the sixth floor.  Today, on the first floor, is one of New York’s most popular costume shops. 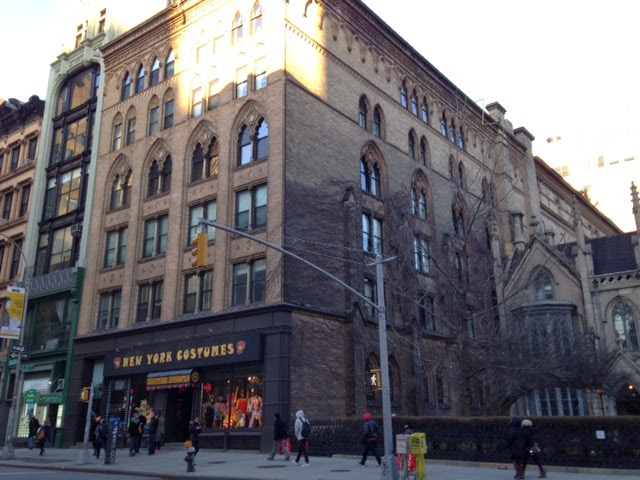 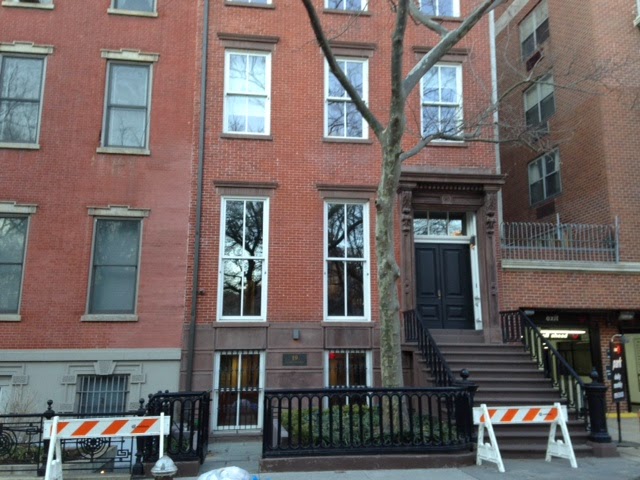 (My thanks to Dixie Roberts for the story idea!)

2 replies on “The Alienist by Caleb Carr, released 20 years ago this week: Retracing the steps of this Gilded Age murder mystery”

Thank you for this wonderful article! As I run 17th Street (http://17thstreet.net), a website dedicated to the Alienist books, I’ve read a lot of the history relating to the novel, but I wasn’t aware of the connection between Sara Howard and Isabella Goodwin. Your readers might be interested to know that to commemorate the book’s 20th anniversary, I’ve put together an interactive timeline of The Alienist’s sequence of events alongside international, national, and local historical events that took place at the same time in order to place the book within a wider historical context. The timeline can be found on 17th Street. Thanks again for the great article!

When will they make it a movie?