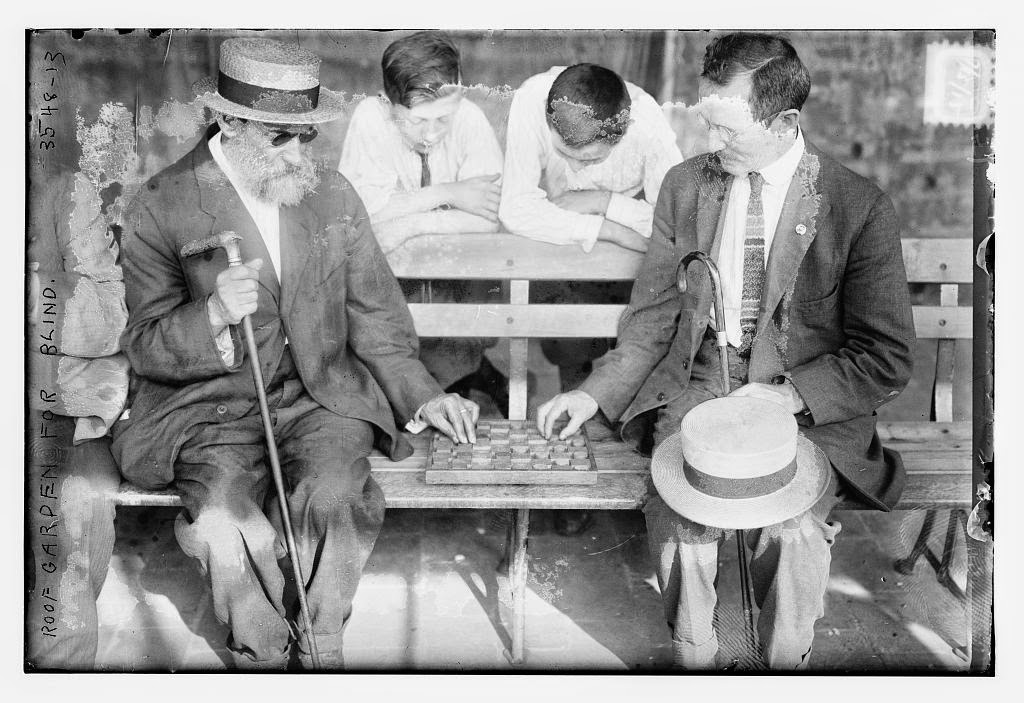 Above (and in the photographs below): Young and old alike enjoy the roof garden atop the Bank of the United States building, on the corner of Delancey and Allen

Next to the Tenement Museum in the Lower East Side on Delancey Street stands an elegant grey building incorporating regal Doric columns on its face. Echoing its facade is the restaurant and lounge on its ground floor — the Grey Lady.   It was constructed over one hundred years ago for the Bank of United States, a commercial bank that did not survive the Great Depression.

The bank, a venture by Jewish financier Joseph S. Marcus, had an attention grabbing name, sounding like a branch of the federal government.*  But it was the unusual feature on the top of the building that summoned the most attention at first — a rooftop garden for the blind.

While services for blind people in New York greatly improved with the social changes of the late 19th century, most facilities were in small rooms in overcrowded neighborhoods.  With the 20th century came the concept of “open air” schools and libraries for the prevention of diseases.

From the 1919 book called the Education of the Blind:  “Whatever may be said of sports and games for the blind, the “open air” principle must be strongly emphasized;  if the ever present germs of cold and of the dread tuberculosis are to be conquered, there cannot be too much cheerfully undertaken exercise in the open, where the health-giving sunshine and fresh air can exercise their curative powers the best.” 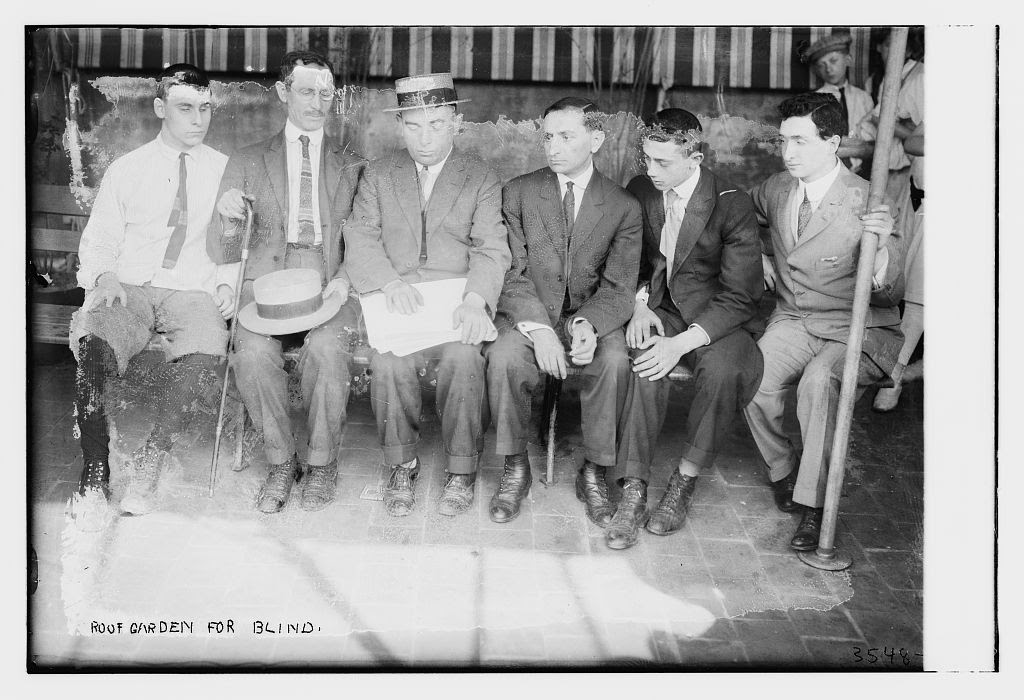 Marcus followed the examples of many Jewish philanthropists is reaching out to the communities of tenements around his bank.  His lofty Bank of the United States building opened at the corner of Delancey and Allen Streets in 1914, and, believing that the freshest air in the city could be obtained atop buildings, he topped it with a rooftop garden, devoted only to the needs of the blind.

It initially opened with “flower beds and settees under the awning [several] stories above the street, where it is always cool.”  The following year, the New York Times reported “[t]he roof is floored with tile and surrounded with a high wall so that the blind may move about in safety.”

“This is said to be the only place on the Lower East Side where the blind can be sure of safety from pickpockets.” [source]

Blind residents of the Lower East Side were brought to the roof garden with the help of “light bringers,” a group of 150 child volunteers from the local public schools. 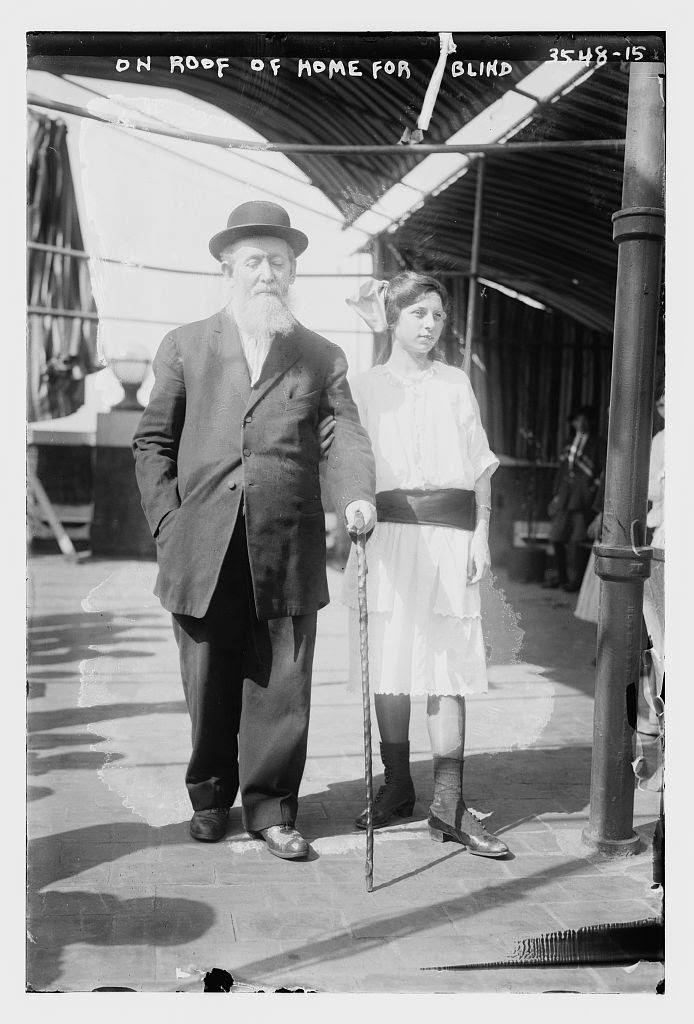 The roof garden was operated by the Hebrew Association for the Blind, who had offices in the bank building.  The garden featured entertainment by local school choirs and lectures by “well known men.”

It’s the entertainment and leisure activities of Marcus’ roof garden that distinguished it from other rooftop gymnasiums which also offered outreach to blind New Yorkers.

An open-air gym at the Lighthouse for the Blind at 111 East 59th Street provided a rooftop running and roller-skating track while such services as cooking classes, swimming pools and a bowling alley were offered in the rooms below.

“Health for the blind through recreation in the open air,” was the motto of this institution. [source]  Lighthouse International is still at that location today.

I’m not sure when the Delancey Street roof garden closed — more beneficial services for the blind emerged by the 1920s — but thankfully it wasn’t there on December 10, 1930, when a Bronx branch of the Bank of United States saw the first of many bank runs in the aftermath of the Stock Market Crash of 1929.

The following day, at the Delancey Street bank, “a line of 300 persons extended around the corner into Allen Street,” looking to withdrawal their money.  Judging from the photograph below (showing the mob at Delancey and Allen Streets on that very day), it appears that more than 300 people showed up!  That was the last day of business at the Bank of the United States. [Read its 1930 post-mortem here.] 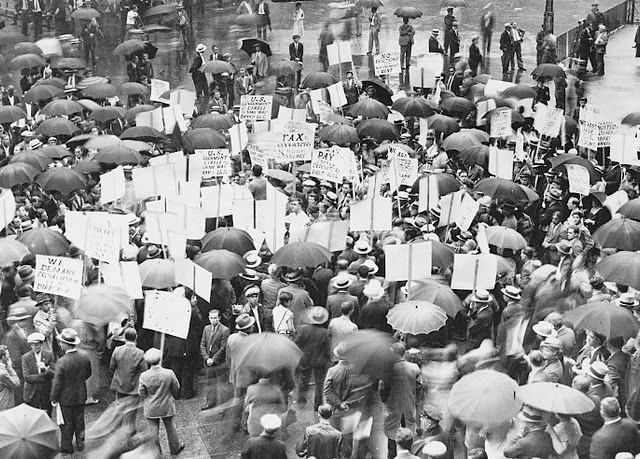 The building recently made the news — and made the day of nostalgists — when the proprietors of the Grey Lady installed the Famous Oyster Bar neon sign above their establishment, another sort of light bringer to this building’s unique history. 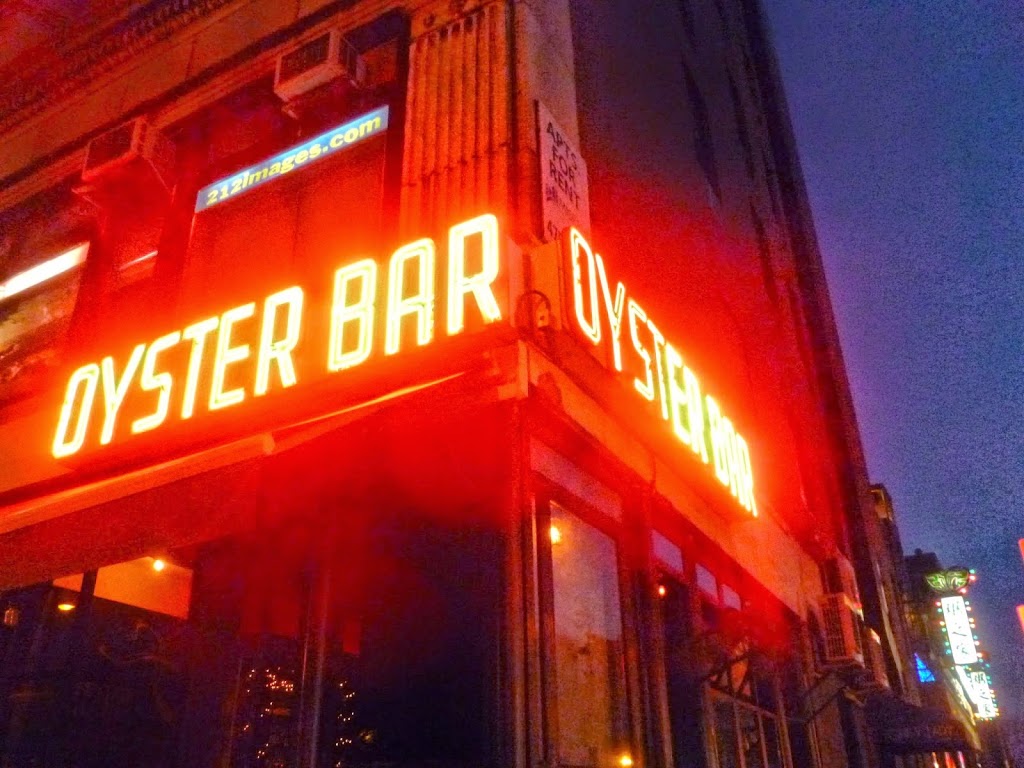 * By the way, that lofty bank name was controversial back when it was chartered in June 1913. According to the New York Times, “The Bank of United States was chartered yesterday. This does not mean that the new national banking and currency system has gone into effect, and that the great United States is back of this institution, although interests which, it developed yesterday, have been making a hard fight against the use of that name say the ignorant immigrants of the east side are likely to think it does.” 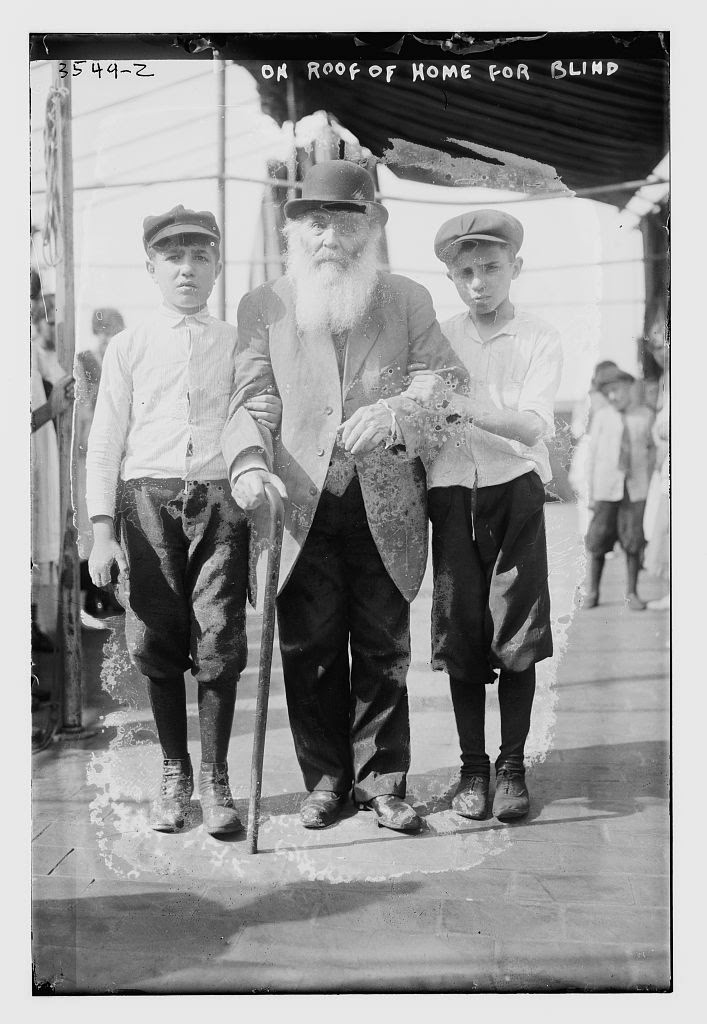