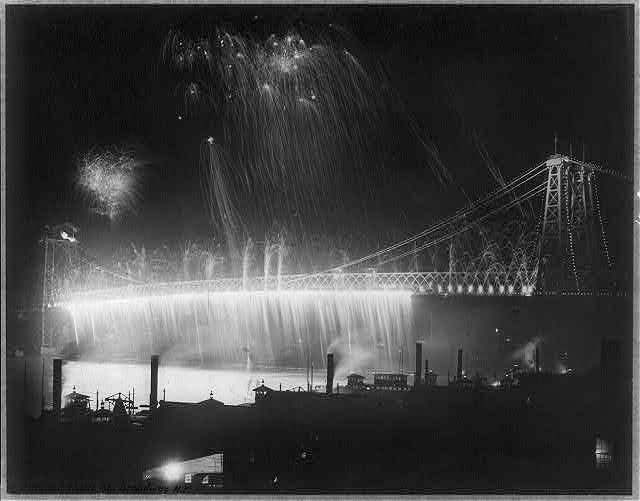 Above: One of my favorite pictures of the Williamsburg Bridge, at its opening in 1903
Nothing befits a fireworks display quite like a skyline to frame it, and no city has a skyline quite like New York City. Â And so, despite the obvious dangers of setting off thousands of pounds of explosives in a crowded, flammable city, the city has been subject to some of the most beautiful feats of pyrotechnics in American history.
Here are ten of the greatest examples in the city’s history — celebrations not only of holidays, but vivid displays that highlighted the finest landmarks and accomplishments: 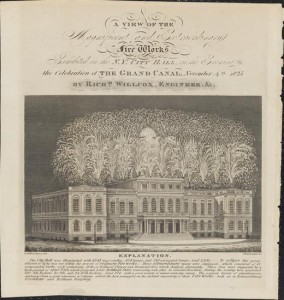 1. Opening of the Erie Canal — November 4, 1825
“On November 4, 1825, a spectacular extravaganza celebrated the just finished Erie Canal. City Hall, brilliantly illuminated, proudly overlooked a fireworks display in the park. There was good reason to celebrate: Â the canal was the match that lit the fuse that detonated the boom of the 1830s” — Mark Caldwell, New York Night
(Illustration by John Francis Eugene Prod’Homme, Image courtesy MCNY) 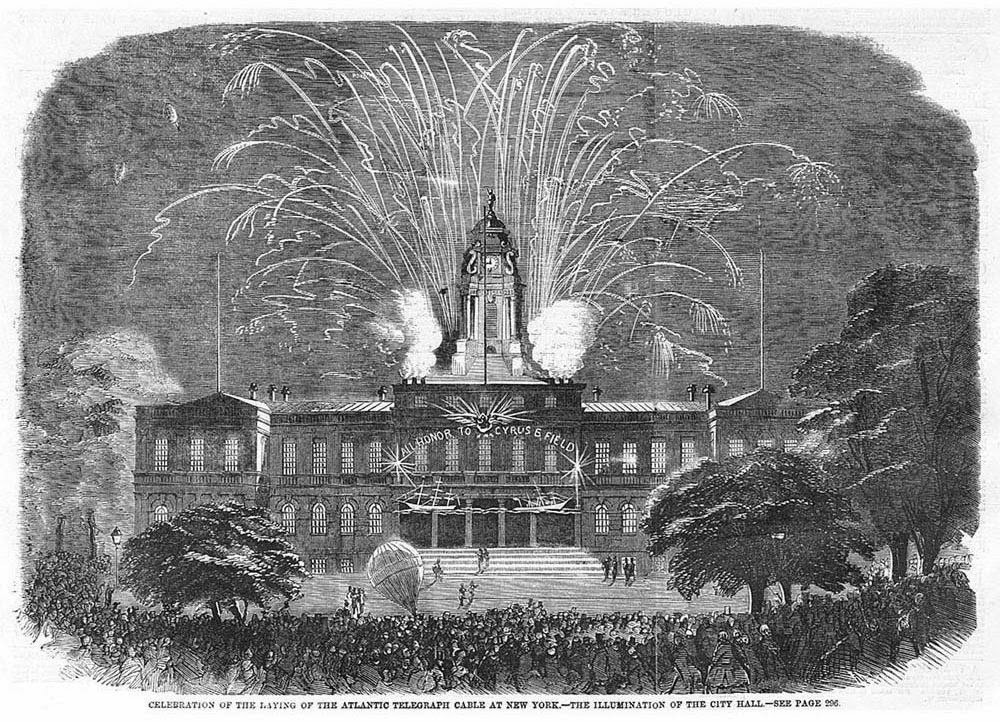 2. Celebration for the Transatlantic Telegraph Cable — September 1-3, 1858
This called for a variety of elaborate pyrotechnic displays, including one 21-part program, which included “some new principles were attempted for the first time in the pyrotechnic art,” “two light houses connected by a line of rolling waters, on which the ships slowly moved towards their destination” and “all the splendor of the dazzling colors, assisted by all the mechanical contrivances of which the art is capable”. [source] 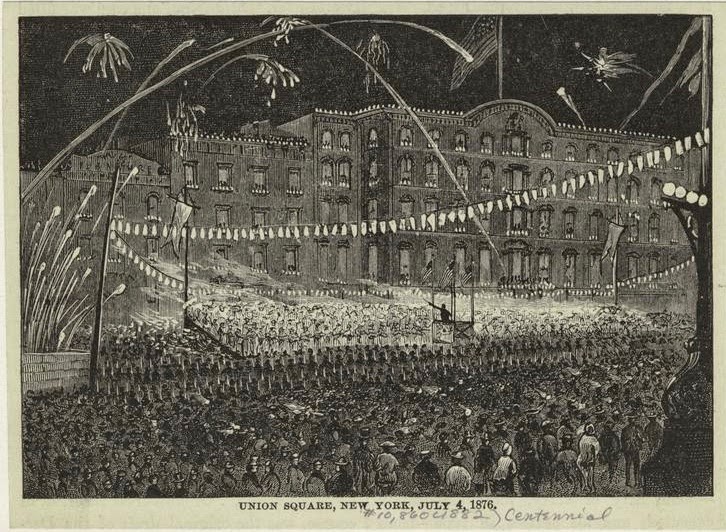 3. American Centennial — July 4, 1876
The all-day centennial celebration culminated in fireworks “representing the Goddess of Liberty sitting on a cloud in the act of greeting,” as well as several street-level “allegoric representations” illuminated in colorful fireworks. [source] 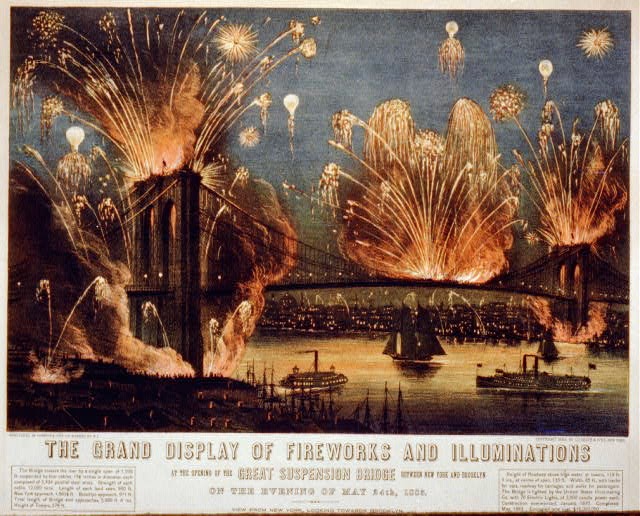 4. Opening of the Brooklyn Bridge — May 24, 1883
“Forty pyrotechnists superintended the display. There were 6,000 four-pound skyrockets, 400 bombshells and 125 fountains of colored lights. Â Zinc bombshells of about ten inches in diameter were fired from mortars 500 feet in the air. Each bombshell held 600 stars of various colors. Â A newly-invented rocket was displayed. Â It held seven parachutes of cloth. Â From these hung colored balls of fire. Â The rockets burst, leaving the parachutes floating in the air. Five of these rockets were fired at once. Â The result was thirty-five balls of colored fire floating in the air…..” [source] 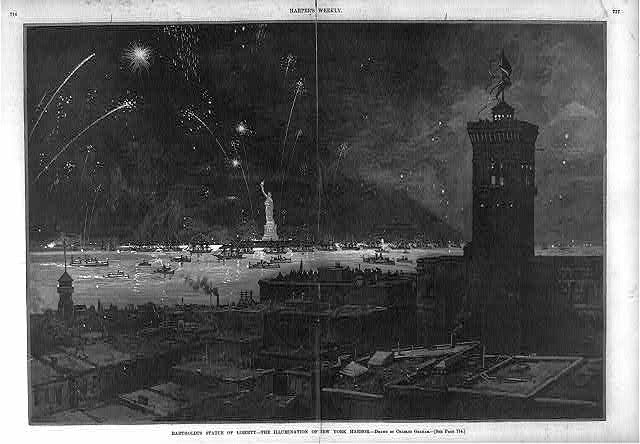 5. Dedication of the Statue of Liberty — October 28, 1886
Well, actually, three days later, on November 1. Â A soggy day killed off the fireworks on the day of the statue’s dedication, but were finally launched the following Monday.

“At precisely the hour fixed there came a burst of kaleidoscopic lights from Bedlow’s and Governors Island, and in an instant the air was filled with flying fire balls of every color of the rainbow.” 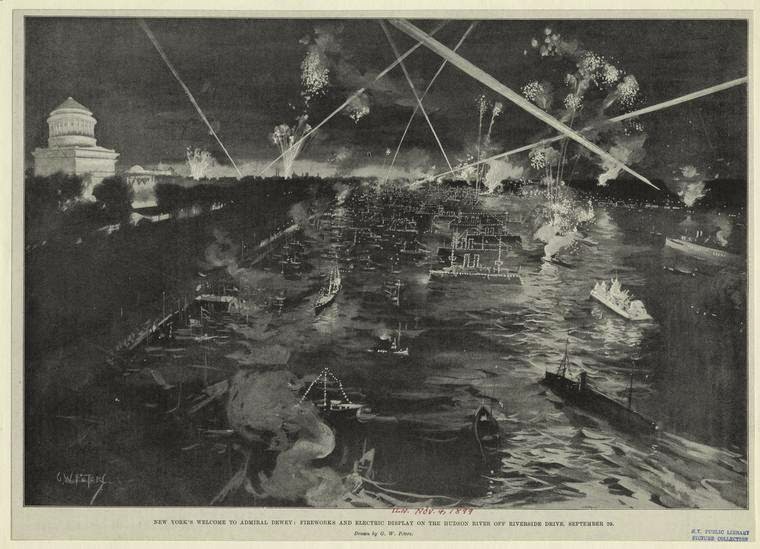 6. Hero’s Welcome for Admiral George Dewey — September 29, 1899
The arrival of Admiral Dewey, the face of the U.S.’s victory in the Spanish-American War, Â inspired an exuberant celebration throughout the city.

“The day of Dewey celebration on the water ended in a roaring, popping, banging blaze of glory last night. Fireworks displays lit up the east side, the west side and all around the town. Not only did great boats loaded down with fireworks sweet down all the water-ways and circle about the lower Bay, but in the parks throughout the middle of the city the sky was painted red, white and blue and all the other shades of color known to the pyrotechnic art. ” [New York Sun] Â (Illustration by GW Peters, courtesy NYPL) 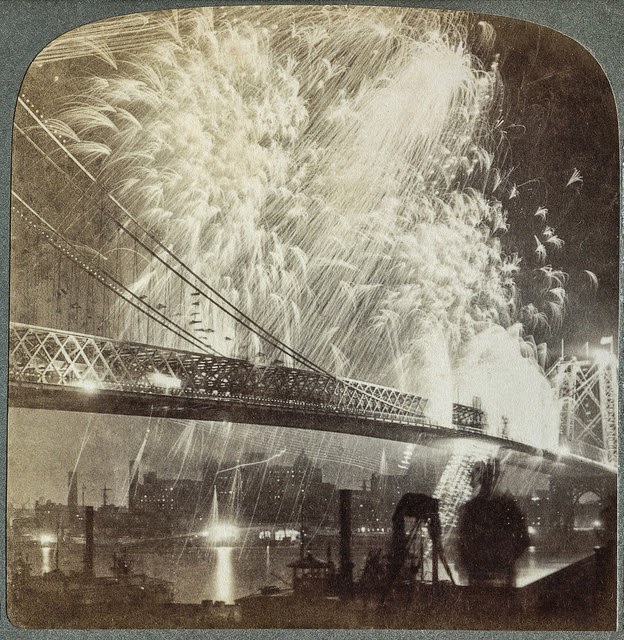 7. Opening of the Williamsburg Bridge — December 19, 1903
“Then, without warning, the bridge was suddenly transformed into a sheet of flame. Â From tower to tower the flames turned and writhed and flared high in the air, illuminating the waterfront for blocks. Â Then came a kaleidoscopic medley of colors, red, green, purple, orange, violet — more colors than French ribbon dealer could enumerate — from huge rockets that sails two hundred feet above the bridge.” [source] 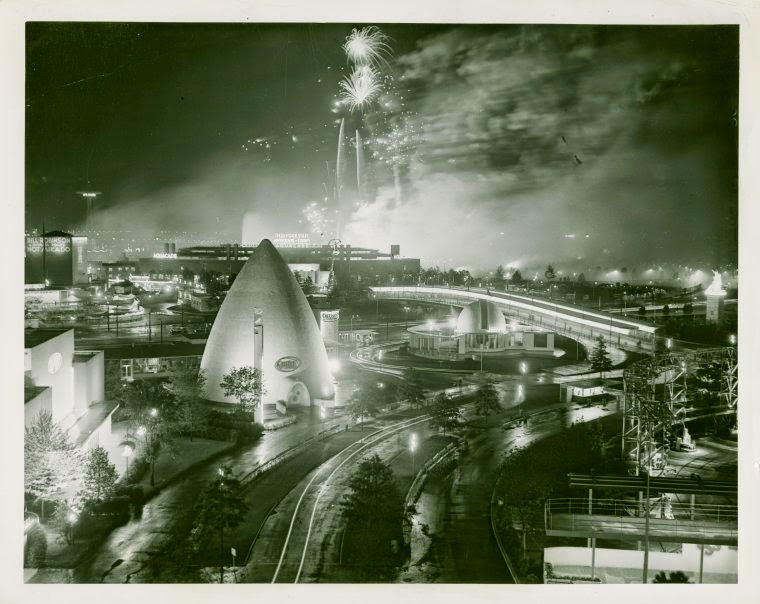 8. New York World’s Fair — July 4, 1939
“Fireworks colored the sky with the red, white and blue of the nation’s colors over the World’s Fair Grounds last night as two spectacular and elaborate displays of fire, water and music were set off, first from the Lagoon of Nations in the exhibit area and a short while later from Fountain Lake in the amusement area.” 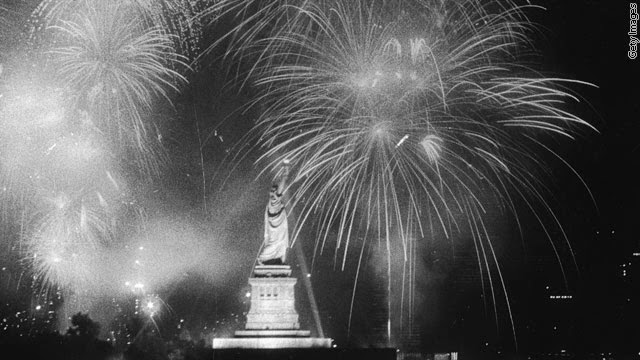 9. America’s Bicentennial — July 4, 1976
This event was notable not only for its visibility across the nation — thanks to a television special — but it was the first fireworks display sponsored by Macy’s. Â Â “New York Harbor became more brilliant than Broadway last night as the biggest and most colorful fireworks display in the city’s history exploded for half an hour in celebration of the nation’s Bicentennial.” [NYT] 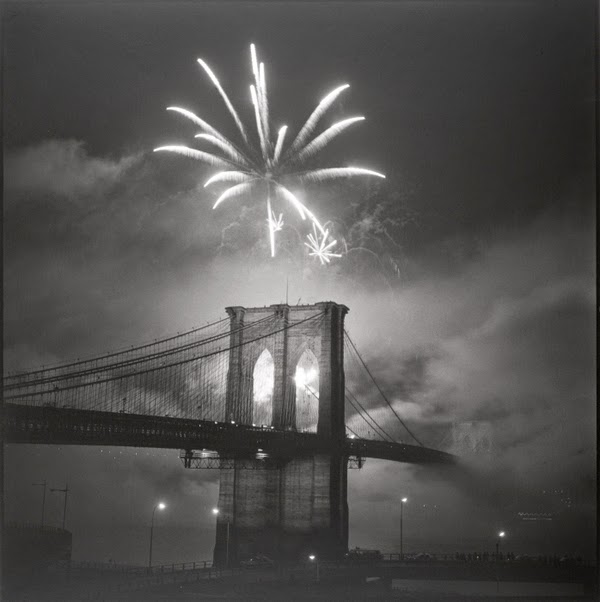 10. Brooklyn Bridge 100th Birthday — May 24, 1983
“Then the sky simply exploded with fireworks. Red, white and blue shells, golden comets changing to silver, crackling stars in red and green, appeared to fill the entire sky, while hundreds of thousands of people gasped at the sheer dazzle of it all.” [New York Times]
(Bruce Cratsley, courtesy Brooklyn Museum)

[…] Bicentennial. The televised event was watched by millions across the nation, with the New York harbor said to be “more brilliant than Broadway” during the celebration in […]

Thank you for the historical information.

You left out the Statue of Liberty centennial in 1986 which I believe was the largest ever.

In Manhattan/New york were there fire work displays on New Years As early as 1868?