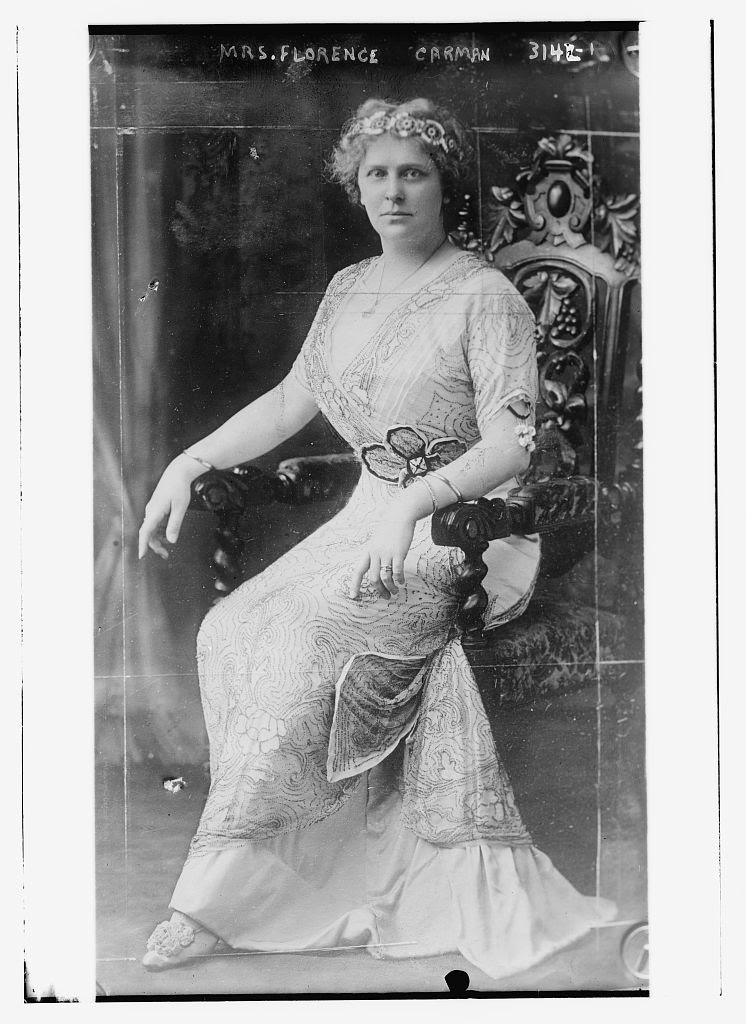 Does this woman look like a murderer to you?

This is Florence Carman, the wife of Dr. Edwin Carman, one of the most respected men in Freeport, on Long Island’s south shore.  Mrs. Carman would be at the center of a murder trial that captivated New Yorkers 100 years ago.

Dr. Carman received a visitor in his office on July 1, 1914, one Louise “Lulu” Bailey.  Her visit was after hours, so we can perhaps surmise the tenor of their engagement.  So, does it seem, did Mrs. Carman.

Here’s Dr. Carman, the subject of his wife’s suspicions and the possible recipient of Mrs. Bailey’s affections: 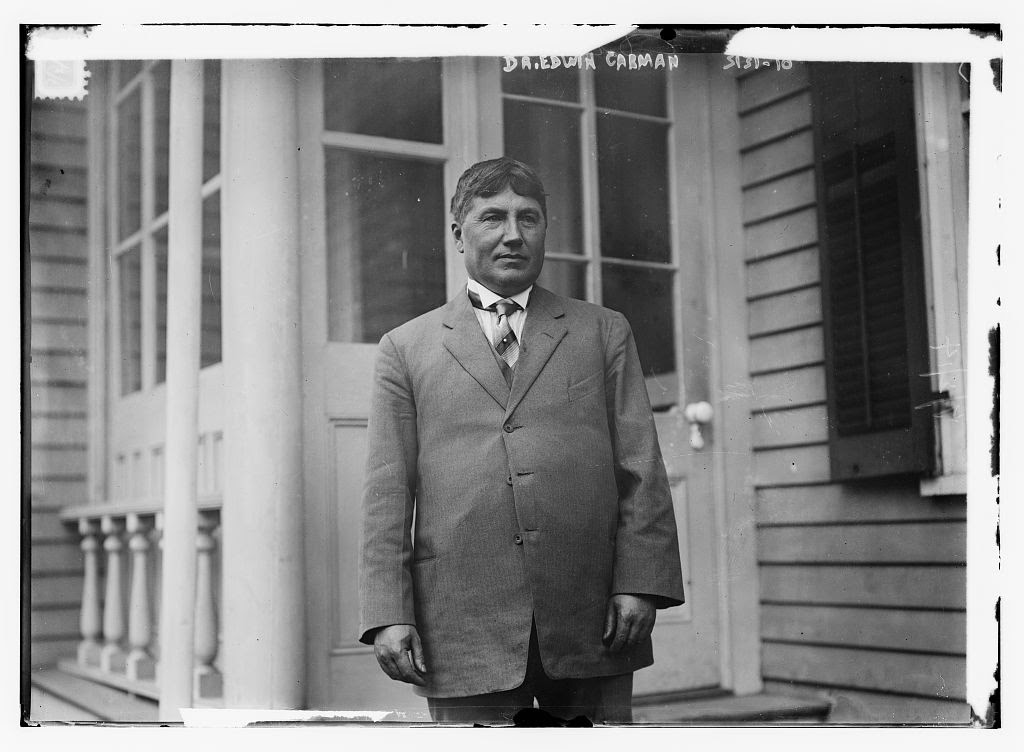 That evening, claimed Dr. Carman, as he entered his office to meet Mrs. Bailey, somebody shot at her through the window. She fell dead to the floor.  I should add that the office just happened to be on the ground floor of the Carman’s Freeport home, a handsome structure, “one of the show places of the village.”

Below: Investigators case the Carman’s house for clues 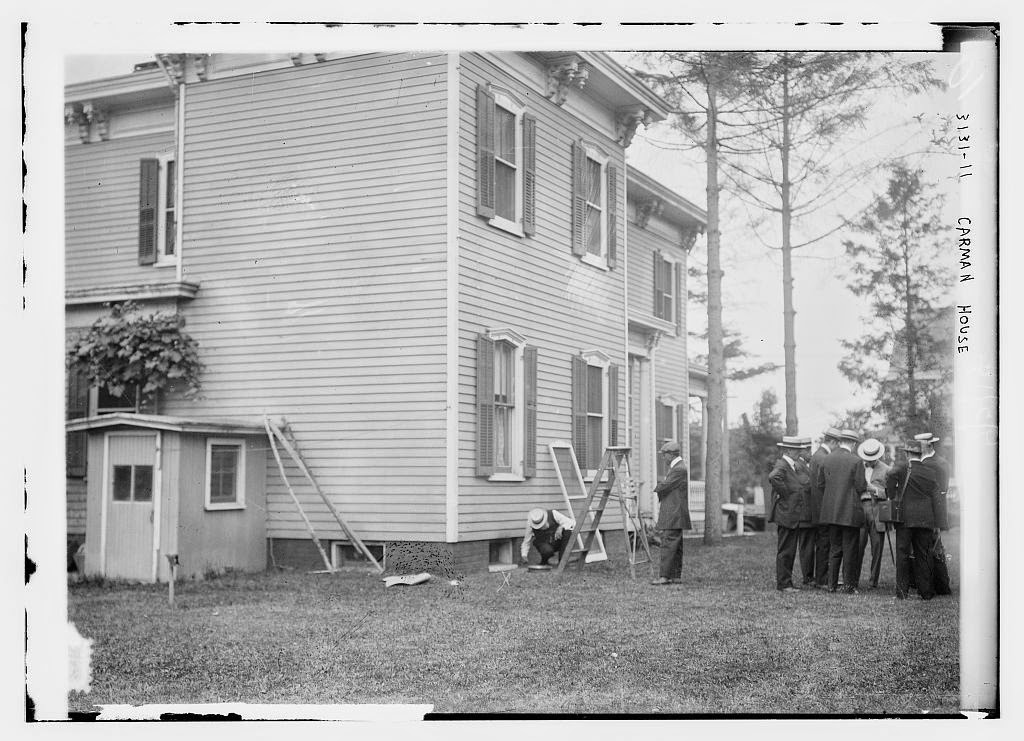 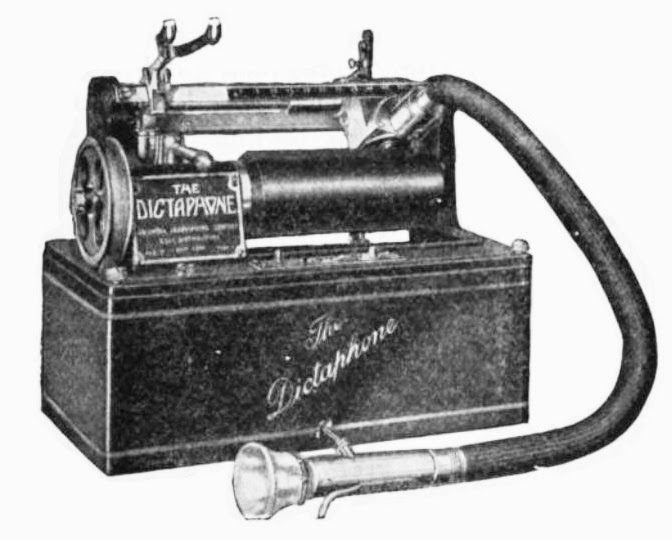 The following day revealed a bizarre twist — Florence had purposefully left on a Dictaphone machine on in the office.  After the police left, she removed it from the crime scene and hid it in the attic.

At right: One example of a Dictaphone machine from the 1920s..

Mrs. Carman, it seems, did not trust her husband with any female patients.  With the Dictaphone on, she could listen in on the conversations between the doctor and his patients.  In particular, she could spy upon any possible dalliance between her husband and Mrs. Bailey.

Her guilt seemed assured when witnesses declared seeing a “woman in white” standing on the porch at the time of the murder. 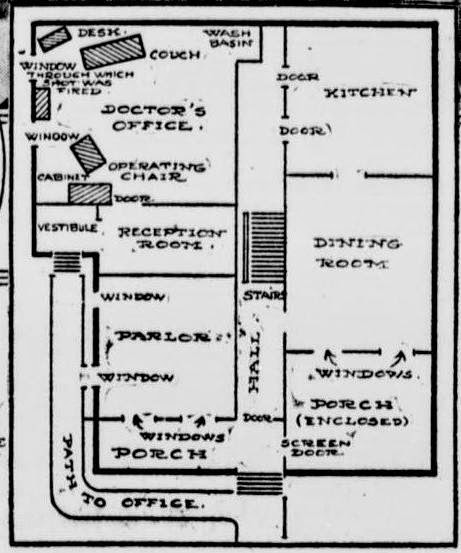 From the New York Sun:  “The detective took the part of the assassin, creeping at dusk among the hemlocks and crawling, pistol in hand, to the window of Dr. Carman’s office through which Mrs. Bailey was shot.”

At left: A map of the murder scene from the New York Sun

Guilt eventually rested on Mrs.Carman, who was arrested exactly one week after the murder.

Meanwhile, Bailey’s murder swept away all other news of the day, filling the New York newspapers for weeks with the possibility of a salacious scandal.

Here’s the Doctor with his daughter Elizabeth Carman, who later took the stand to defend her mother: 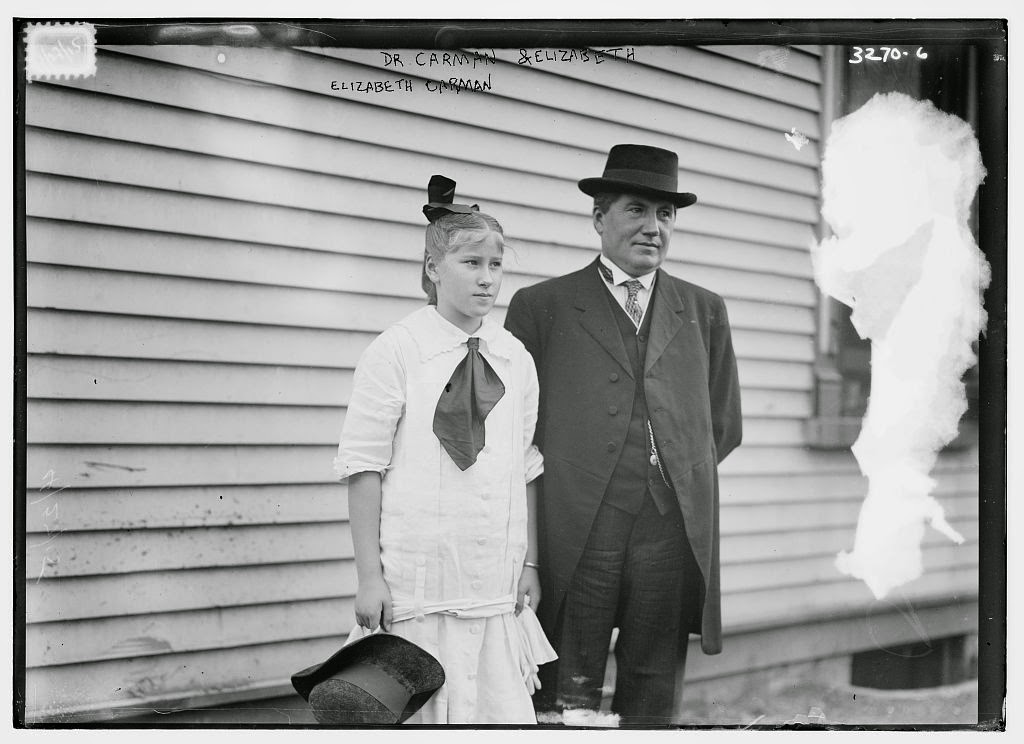 Florence was brought up on charges of murdering Bailey, and evidence was brought before the Freeport Justice of the Peace.  In October, the case went to trial in the nearby town of Mineola.

The following photographs were taken outside the courthouse. 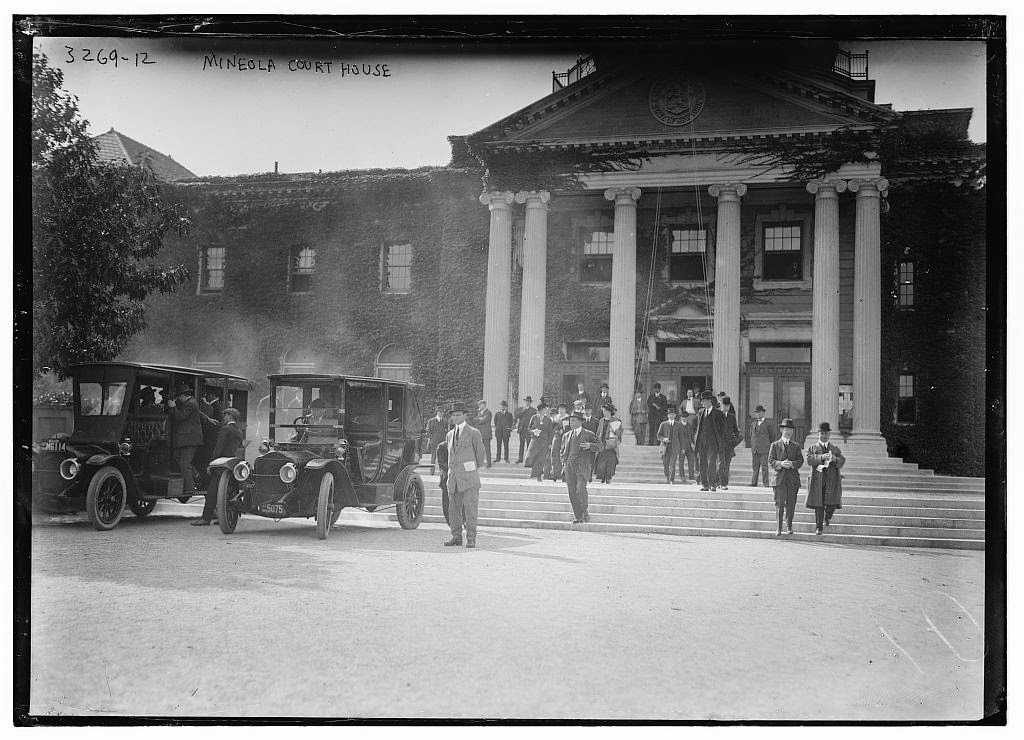 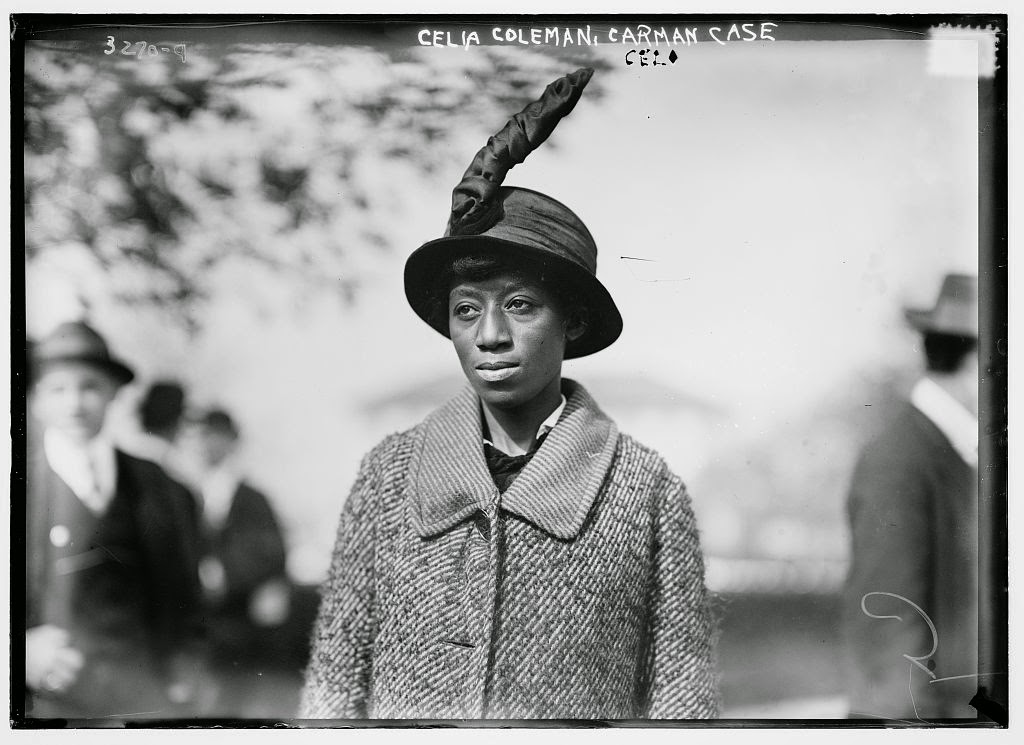 Florence’s defense rested on the testimony of Celia Coleman, the Carman’s maid, who produced a solid alibi for Mrs. Carman, proving she was inside the house the entire time, not on the porch, and thus not the “woman in white.”

However, by October, Coleman claimed that Florence had in fact crept out the back door moments before the fatal murder.  Then she testified….

The reasons for her conflicting stories are muddled, but she may have been covering for her employer then later told the truth.  Or else, she was bought off, as a later conspiracy theorized, brought forth a more tantalizing story to the delight of newspaper men everywhere. 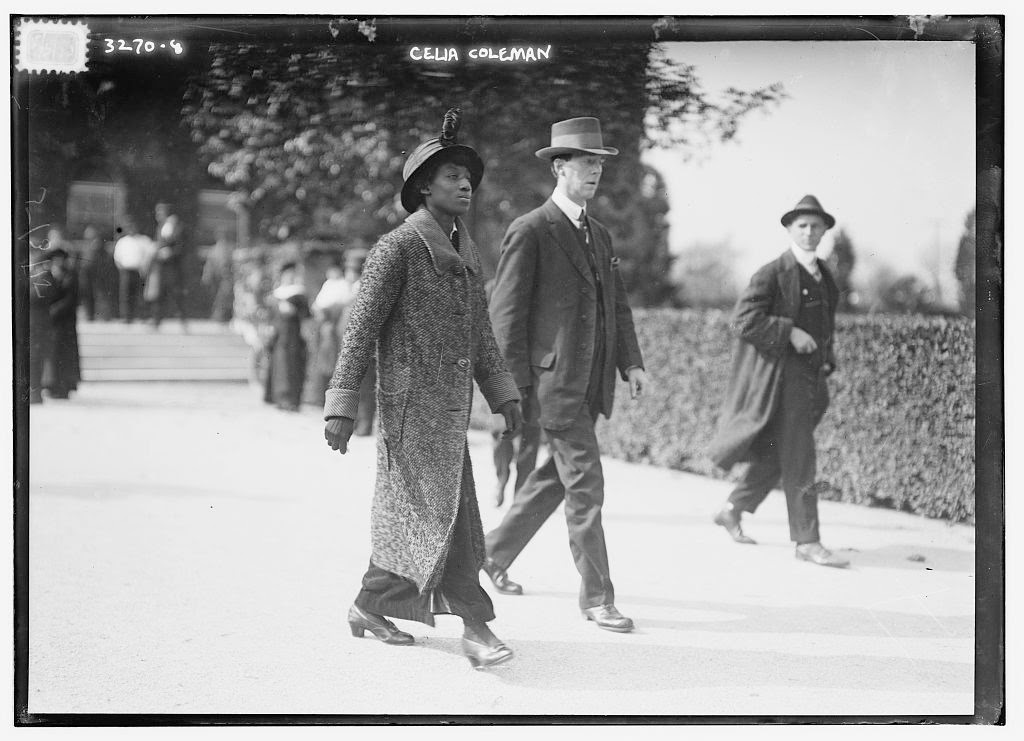 The dashing Dr. William Runcie also took to the stand in regards to the presence of the Dictaphone and whether it was an indication of her mental state.

Runcie had come to the house on the evening of the murder, and Florence had told her then of hiding the machine in the office. But she urged Runcie not to tell her husband this fact.  He tried to brush away this fact.  “While it is out of the ordinary, I cannot see why so much importance is given to it.” [source] 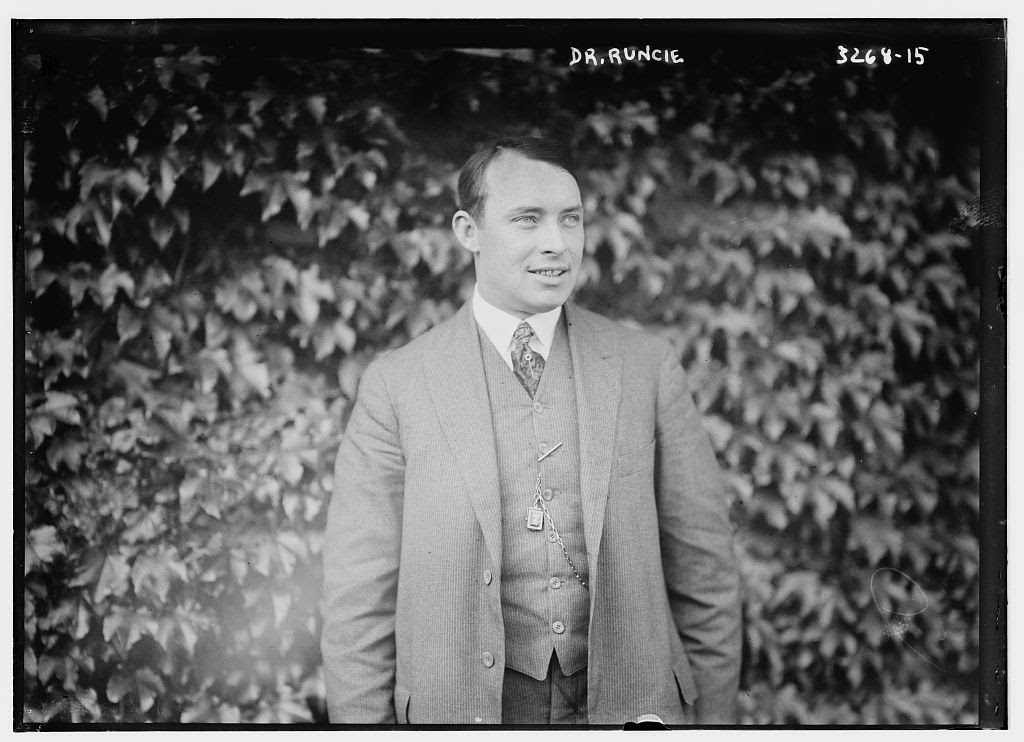 Another witness named George Golder, who had originally testified of Mrs. Carman’s guilt, now “made an affidavit practically repudiating his identification of the doctor’s wife as the woman he saw on the porch.” [source]  His testimony was later used to cast guilt upon Doctor Carman.

Below: A jury of her peers? 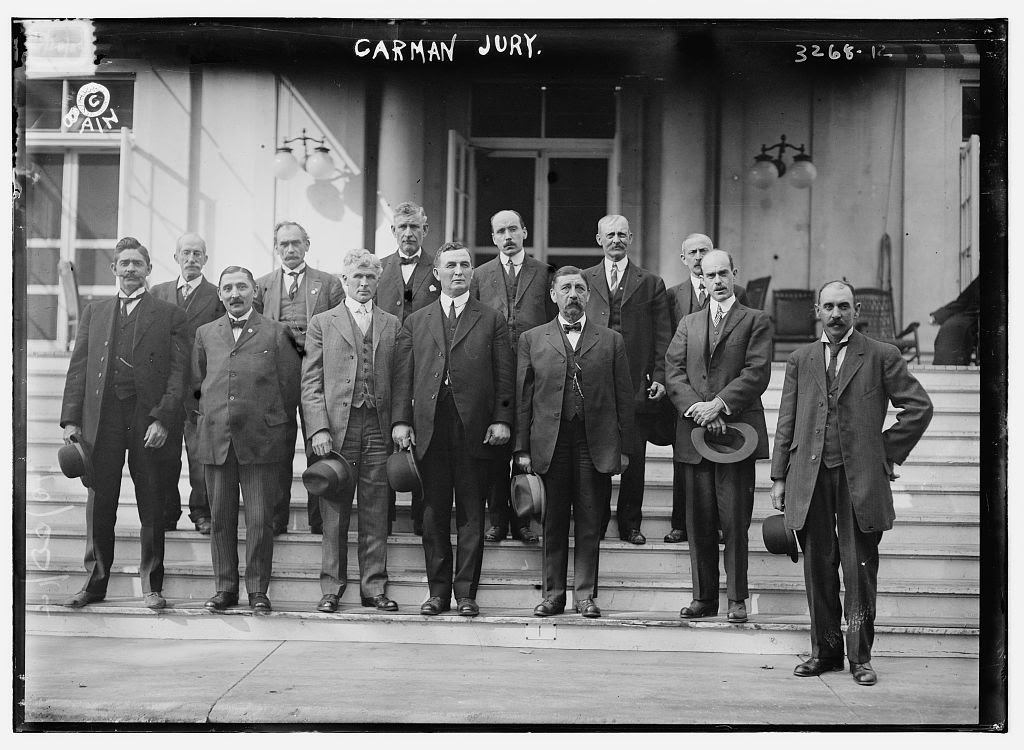 The family of the deceased woman made a dramatic entrance.  This is Lulu’s daughter, mother and husband. 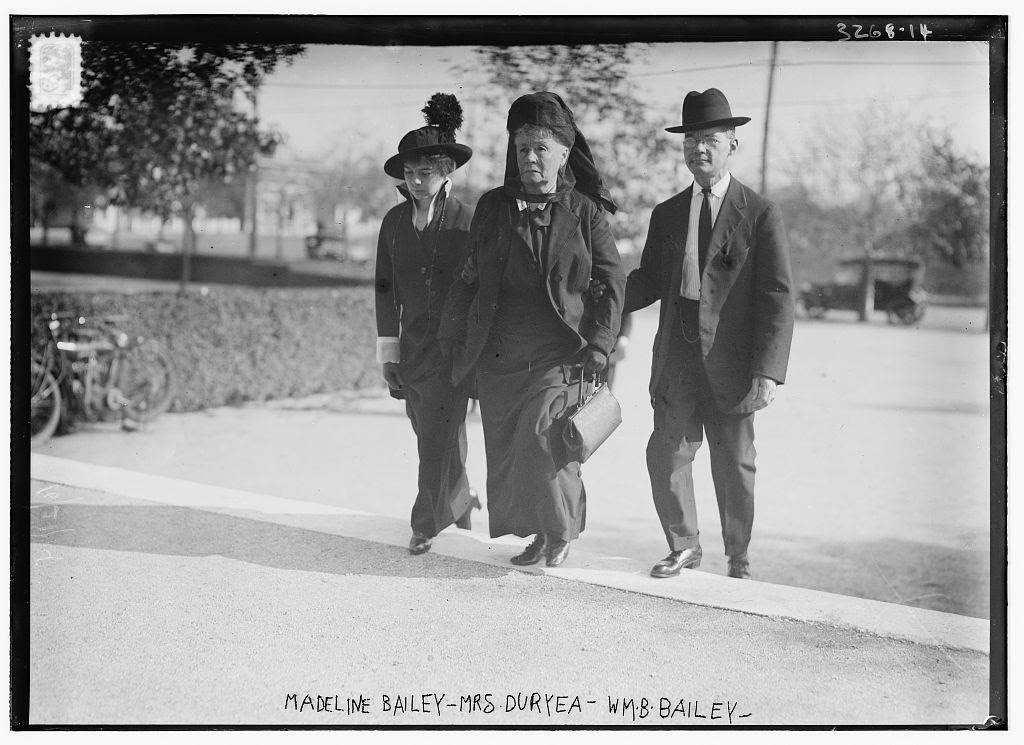 A little sex appeal was brought into the courtroom with the appearance of Florence Raynor, specifically there to contradict the testimony of another man who claimed to have seen Mrs. Carman on the porch that night. 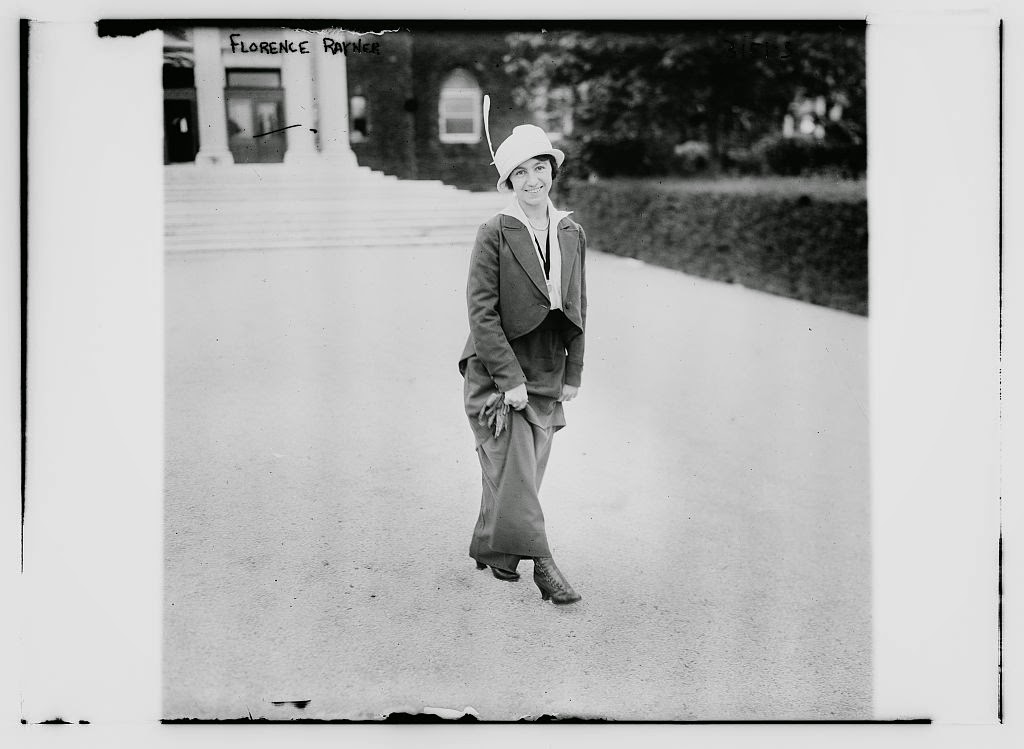 In the end, the jury could not come to a consensus regarding Mrs. Carman’s guilt.  Wrote the New York Times, “After deliberating for thirteen and a quarter hours, the jurors in the trial of Mrs. Florence C. Carman for the alleged murder of Mrs. Lulu D. Bailey filed wearily into the Supreme Court room at 10:58 o’clock this morning and the foreman announced that it was impossible for them to come to any agreement.”

She was re-tried in May of 1915 and given a vigorous grilling on the stand. The New York Times makes note of the soft-spoken woman raising her voice for the very first time — evidence, so goes the inference, of the trial taking its toll upon her.  The jury sympathized with her and finally acquitted her of the murder.

By this time, of course, the story was relegated to the back pages, as world events — and other local murder cases — monopolized the attentions of New Yorkers.

To this day, the murder of Lulu Bailey has not been solved.  It’s unclear whether justice was really served that day.  “I do not believe a jury in Nassau County can be brought to convict a woman of murder in the first degree,” said the district attorney. 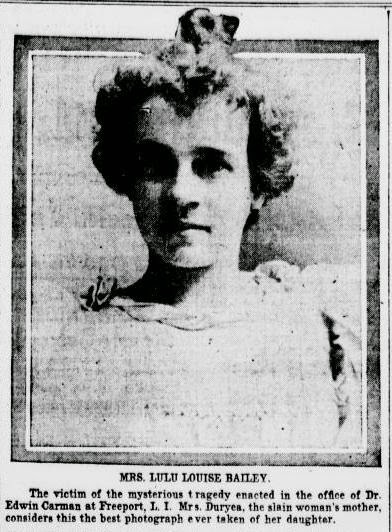 All the photographs above are courtesy the Library of Congress.

1 reply on “The Dictaphone Murder Trial of 1914: A Mystery In Pictures”

Dr. Runcie is my grandfather.