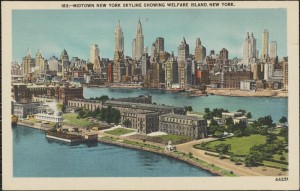 Welfare IslandÂ (once the more enticingly named Blackwell’s Island) was New York’s depository of human services, once a dour place of horrifying asylums and miserable workhouses. Â In the 1960s Mayor John Lindsay was preparing to revitalize the East River island with new housing and increased support for the hospitals there. Â Architects Philip Johnson and John Burgee were brought in to rethink the urban space as a largely automobile-free community.

For this grand experiment, all they needed was a name. Â Luckily there seemed be a couple prominent figures being egregiously ignored in the city — Franklin Delano Roosevelt and his wife Eleanor:

“It is astonishing, and becomes more disgraceful with every passing year, that within the city there is still no memorial to this great New Yorker (except for FDR Drive, a dubious honor). Â The opportunity is, however, immediately at hand. Â Welfare Island, now slowly undergoing a total reconstruction and rebirth, would take on a new symbolic significance if its name were changed to Franklin D. Roosevelt Island — or, better yet, to Franklin and Eleanor Roosevelt Island in honor of that extraordinary woman who was even more closely identified with New York City than was the president himself.”

By the following year Mayor Lindsay submitted a proposal to re-name Welfare Island for the president and the first lady. Â From Jan. 21, 1973: 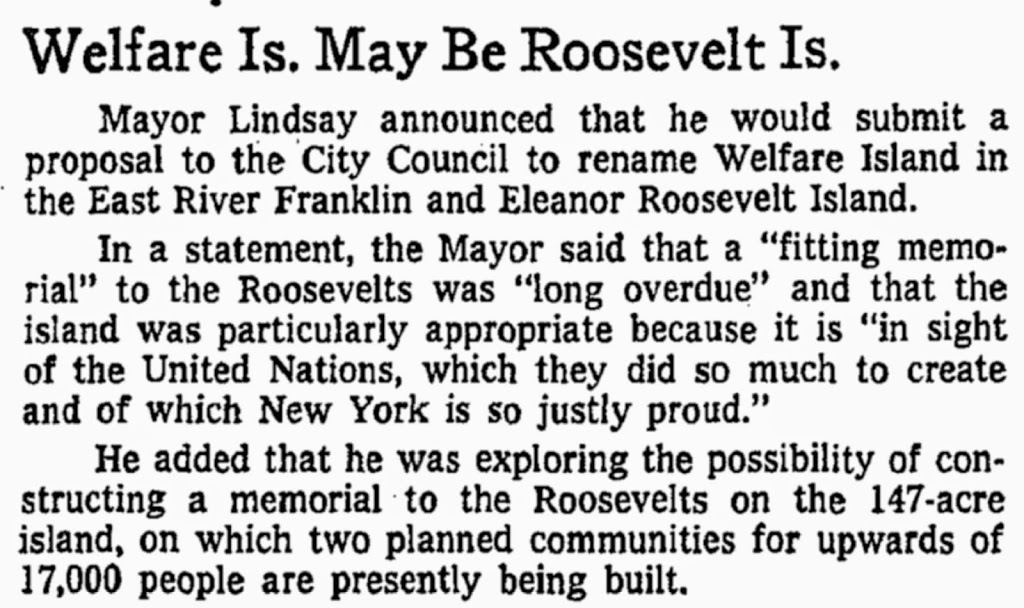 It was officially approved later that summer but with a revised name — Franklin Roosevelt Island.

To the Council, “a witness testified that the name of Welfare Island should be dropped because plans were under way to start marketing this September the thousands of apartments already built and still under construction as part of a $300-million ‘new town’ designed to replace outdated medical facilities.” [source]

Below: The island in April 1961, photo courtesy the New York Fire Department 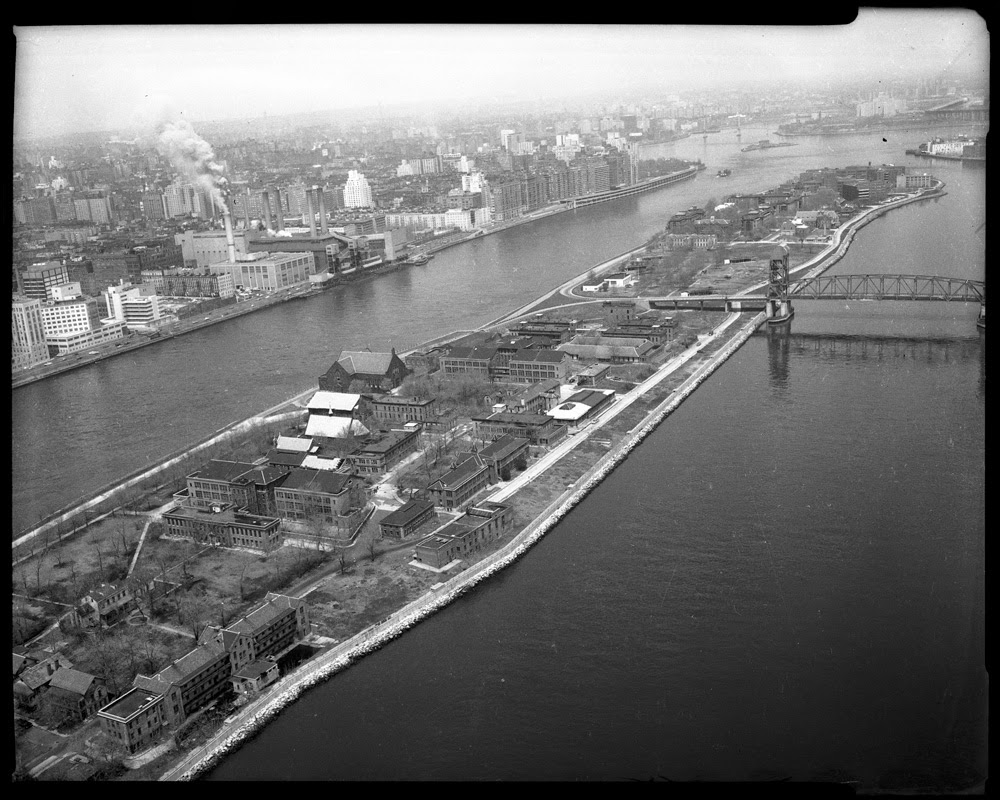 A Louis Kahn memorial to Franklin Roosevelt was to be built at the south end; Â it would take over four decades, but the Franklin D. Roosevelt Four Freedoms Park would finally open in 2012.

She finally did get her own memorial in New York City — an understated statue tucked away in Riverside Park.

It was unveiled on October 5, 1996 by Hillary Rodham Clinton. Â Oddly enough, Hillary regaled the crowd with a story of imaginary conversations she liked to have with Eleanor. “When I last spoke to Mrs. Roosevelt, she wanted me to tell all of you how pleased she is by this great, great new statue.”

Top picture courtesy Museum of the City of New York

1 reply on “Whatever happened to Franklin and Eleanor Roosevelt Island?”

I’ve been wondering what effect the new Cornell Tech campus will have on Roosevelt Island, so I was thrilled to see that these WPA murals have been restored and will be used in the new buildings. http://www.news.cornell.edu/stories/2016/03/roosevelt-island-hospital-murals-saved-tech-campus

Thanks for the great work you do- I’ve learned so much from the podcast, and enjoyed every minute of it!