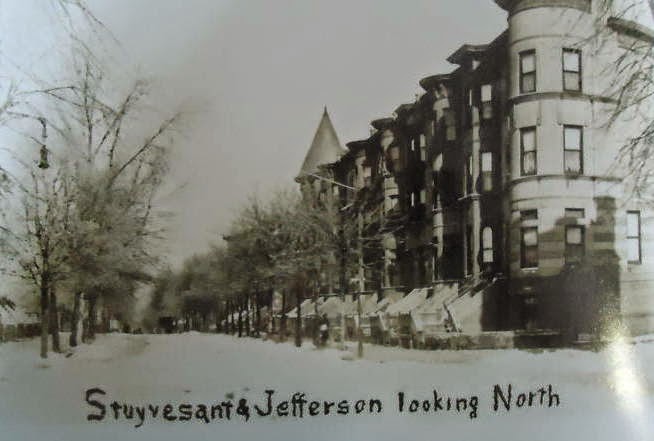 The corner of Stuyvesant and Jefferson in 1900, looking much the way it does today.  The haunted house in question is a half a block south of this photo. (Courtesy the site Save Bedford Stuyvesant)

More Brooklyn-themed ghost stories coming your way tomorrow.  But here’s an unusual tale I stumbled across while researching for this show.  Brownstone Detectives has also written about this particular event so check out their page for more information.

The Brooklyn neighborhood of Bedford-Stuyvesant is defined by its architectural character, rows of impressive brownstones and ornate apartment buildings which trace back to the late 19th century.  It was once two separate villages — Bedford and Stuyvesant Heights — combined to appeal to new residents in the ever-expanding city of Brooklyn.  The Bed-Stuy of the 20th century was the heart of African-American residential life; gentrification may alter that definition in the 21st.

Another feature of the neighborhood that may have passed down through the decades are its ghosts.

Simply mix a neighborhood of families full of imaginative children with severe and dramatic old architecture, and voila! You’ve got ghost stories.  Anybody born and raised in Bed-Stuy probably has one story of a purported haunted house, either a structure uninhabited and boarded up or an old home with a single unseen resident, the yard out front overtaken with neglect.

But perhaps one of Bed-Stuy’s most interesting ghost stories comes not from legend but from an actual newspaper report — the haunting of 281 Stuyvesant Avenue in Stuyvesant Heights.

The four-floor building was originally built in 1897 as a small apartment house. Although included in the Stuyvesant Heights Historic District, its modest apperance pales next to its neighbor, Grace Presbyterian Church (today’s Bridge Street AME Church).

Below: Bridge Street AME Church.  The haunted house in question is the white structure to the far right in this photograph. (Courtesy flickr/Matthew X Kiernan) 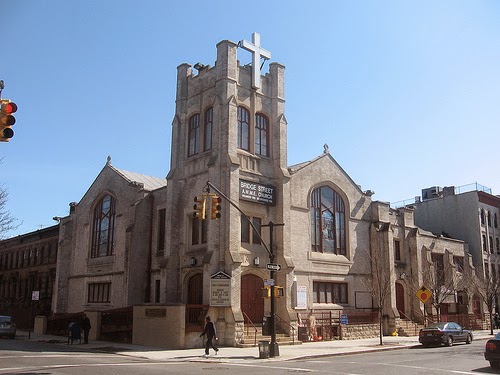 On October 23, 1901, the Brooklyn Daily Eagle reported on a disturbing and frankly stressful time had by the building’s first-floor newlyweds Mr. and Mrs. Joseph Griffin.

The school teacher and his wife moved into the flat in July and immediately experienced some truly unusual phenomenon.  At precisely 2 pm every afternoon the new electric doorbell stationed in the vestibule would ring, prompting the lady of the house to open the door.  But nobody would be there.

After a few days of this activity, Joseph naturally assumed it was troublesome kids.  However one day, Griffin stood in the vestibule at precisely 2 pm.  To his astonishment, the bell ring with no human agency present.

This was only the beginning.  The ghost continued to torment the Griffins with “hollow groans, creepy sidesteps on the staircase and unexpected trips from room to room by articles of furniture.”

A haunting so close to Grace Presbyterian were particularly unsettling. “His temerity in operating in a flat, the windows of which look right out on the stained glass panes of a church, is especially startling.”

The Griffins, more irritated than frightened, could not take this disturbing presence in their home any further and immediately moved out.  The skeptical reporter, of course, took note of the fact that nobody else in the building had experienced any particular supernatural phenomenon.

The upstairs neighbor complained of rats and mice and wind gusts with the strength to swing open doors.

The neighbor added, “The pipes groan and the plumbing rattles too, and my husband says its the spookiest house he was ever lived in, but ghosts! — nonsense.”