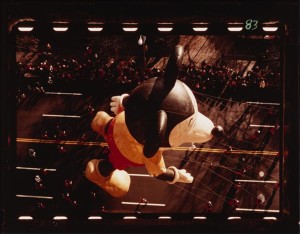 Mickey Mouse at the Macy’s Thanksgiving Day Parade, 1980 (courtesy the Museum of the City of New York)Â

The Christmas Trash Strike of 1981 My new story for A24 Films and A Most Violent YearÂ is up — a look at the strike by the New York sanitation department which kept New Yorkers in feet of garbage. And just in time for the holidays! [NYC 1981]

Cass Gilbert, the architect of the Woolworth Building, was born 155 years ago today. Â Before the Woolworth, he designed three other beautiful structures for the city, and all of them — including the Alexander Hamilton Custom House — are within a short walking distance from his most famous building. [Bowery Boys]

Bright Idea: Did you know New York city had 62 lampposts that have been given official landmark status? [Off the Grid]

Save the Edison: The mission to save the Cafe Edison in the old Hotel Edison is underfoot, including weekend lunch mobs and celebrity appearances (well, fake celebrities). [Jeremiah’s Vanishing New York]

Meet Me for Afternoon Tea: Â Another midtown classic, the Russian Tea Room, is still going strong and still worth a visit. [Gothamist]

#bikenyc: Â Where should New York put its next protected bike lanes? [Streetsblog]

And sadly DeRobertis Pasticceria & Caffe, the Italian bakery which has fed cannoli to New Yorkers since 1904, is closing its door. [Gothamist]

1 reply on “History in the Making 11/24: Big Thanksgiving Rodents Edition”

Put the next bike lane right up DiBlasio’s arse. The next time an ambulance, fire truck or cop can’t get to you fast enough your survivors will know it was all for a good cause.