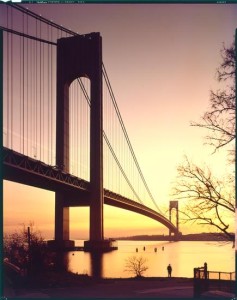 The new span in 1964, photographed by the Wurts Brothers (MCNY)

The Verrazano-Narrows Bridge — the first land crossing between Staten Island and the rest of New York City — officially opened for traffic fifty years ago today. It is one of America’s greatest bridges and a graceful monumental presence in New York Harbor. Â Below is a list of ten things you may not have known about the bridge. Â In addition, I’m also including our podcast on the bridge’s history via SoundCloud. (You can also download it from iTunes — it’s episode #119 — or from here.)

1) Â The Tunnel to Staten Island
People have been dreaming of spanning the Narrows for several decades before the bridge was finally constructed. In New York’s subway fervor of the early 1920s, Mayor John Hylan authorized a tunnel be built to connect Staten Island to Brooklyn, ostensibly to link it to the city’s expanding subway network. Due to massive cost, however, the project was cancelled. For many years, the remnants of the aborted tunnels on either side of the Narrows were referred to as “Hylan’s Holes.”

2) Â Verrazzano-on-Hudson
Giovanni da Verrazzano, who explored the shores of the North American continent in 1524, might have lent his name to the bridge which became the George Washington Bridge, a few decades before the Narrows Bridge was completed. The suggestion was made by a Newark resident and was at least passingly considered that the New York Times ran an article about it: “WOULD NAME NEW SPAN VERRAZANO BRIDGE.” Â The article casts aspersions upon the notion that the explorer would ever be seriously considered enough to warrant his own bridge. 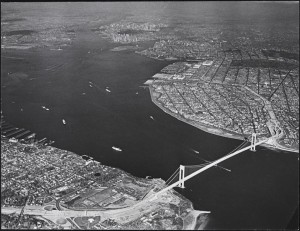 3) Â What’s In A Name? Tanto!
The Florentine explorer had much symbolic value to Italian New Yorkers, and in 1960, the Italian Historical Society of America managed to convince Governor Nelson Rockefeller to apply the name to the brand new bridge about to go under construction.

Some were not pleased with what many considered mere political appeasement. “I wouldn’t be surprised if the next move is to rename the Hudson River,” grumbled the vice president of the Staten Island chamber of commerce. [source] Â Gripes over the name continued well up to its opening and beyond. Â A couple weeks before its opening, one naysayer wrote the Times to propose alternate names: “Let’s call it Freedom Gate or Liberty Gate.” [source]

4) Spell Check
Even then, there was some debate about the proper spelling of the explorer’s last name — Verrazzano or Verrazano. (There was even a small, if vocal, group for Verazzano.) Official construction signs did say Verrazzano, in keeping with the traditional Italian spelling. However, despite strong support for the double Z version, the shorter spelling eventually won out. 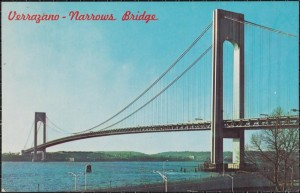 5) The Grand Builders
Although this would be one of the final great projects overseen by Robert Moses, it’s also the final project of New York’s great bridge and tunnel builder Ottmar Ammann. Â He died on September 22, 1965, less than a year after the bridge’s opening.

Milton Brumer is sometimes overshadowed by those two great icons of city building, but the chief engineer of the Verrazano-Narrows had worked with Ammann on almost every one of his projects and was probably more involved in the day-to-day operations than his boss. Â In total, there were 200 engineers employed on building the bridge, on top of the hundreds of construction workers employed to bridge the Narrows. 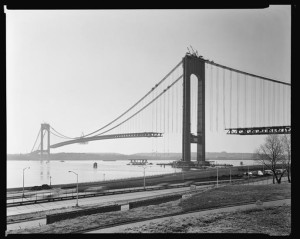 6) Curvature of the Earth
When it opened on November 21, 1962, the Verrazano-Narrows Bridge was the longest suspension bridge in the world, so long, in fact, that bridge engineers had to take the curvature of the planet into account in its design. Â As a result the tops of the towers are slightly farther apart than the bases. Or to put it another way, if the Narrows were drained, the towers would appear to slightly lean away from each other.

7) A Big Boy, and Loud Too
The Verrazano-Narrows Bridge weighs 1,265,000 tons — the longest suspension bridge in the world at its completion, surpassing the Golden Gate Bridge — but was not the most welcomed neighbor to the areas of Bay Ridge and western Staten Island when ground was broken in August 1959. Â Many residents railed against its necessity, the displacement of businesses, even the constant noise assault. “That bridge — who needs it?” [source] Â Once construction began, however, many business owners benefited from the influx of hundreds of workers entering the area. 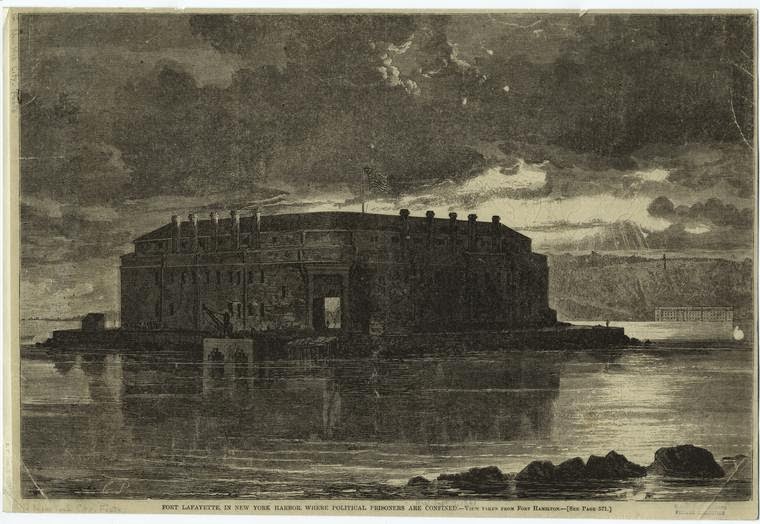 8) Goodbye Fort Lafayette
In building the Brooklyn anchorage, crews swept away the remainder of old Fort Lafayette, an entrenchment built during the War of 1812. Â During the Civil War, Confederates were held prisoner here, including Robert Cobb Kennedy, who attempted to burn down New York during the Great Conspiracy of 1864.Â During the two World Wars, it held reserve ammunition. Moses personally fought an effort to turn the fort into a night club and now had a hand in dismantling it entirely.

Not only was the fort destroyed, the entire island on which it sat was virtually erased. Â In addition, areas near Fort Hamilton and Fort Wadsworth were cleared away to make way for the bridge’s approaches. Perhaps to nobody’s surprise, the construction company tasked with clearing away the old fort employed the son-in-law of Robert Moses.

9) First Class Reception
The U.S. government did something a little different to honor the opening of the bridge — it issued a postage stamp featuring the bridge, to be sold on opening day. Â For its 50 year anniversary this year, the Postal Service replicated the honor with an anniversary stamp. Â The original stamp was for five cents. Â The commemorative stamp is for $5.60 priority mail. (Times change.) 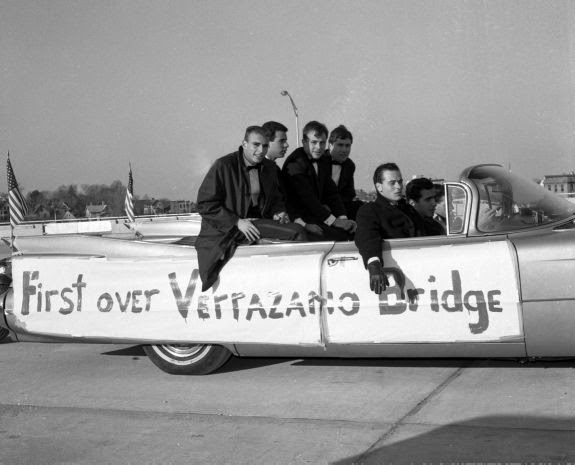 10) Opening Day, First Traffic Jam
The opening of the bridge not only brought great pride to New York City, although a small number of protesters noted that the span did not have pedestrian walkways or bike paths (and it still doesn’t). Â Among the dignitaries as the ribbon cutting ceremony were Governor Rockefeller, the Archbishop of New York Cardinal Spellman, Robert Moses and Mayor Robert Wagner. Â They were all transported over the bridge in a somber 52-limousine procession. Â The press of vehicles was poorly handled for it resulted in “a traffic jam … a half-mile beyond the point where the ribbon-cutting ceremony had been held.”

The first ‘regular’ toll-paying person over the Verrazano-Narrows Bridge was a carload of young men in rented tuxedos (pictured above), “driving a pale blue Cadillac convertible with flags flapping from the fenders,” who had parked behind the toll gate for an entire week to earn the special privilege.”

Below: The bridge’s most famous film appearance in Saturday Night Fever — but don’t watch if you haven’t yet seen the entire film!

1 reply on “A very happy 50th birthday to the Verrazanoâ€“Narrows Bridge! Ten facts you may not know about the bridge’s origins”

The 1st load of goombahs! Yay! Good for my mantle!