Barnum’s American Museum at left (the building with the flag) and the Astor House at right, from the vantage of City Hall Park, circa 1850. Both buildings were victims of the Confederate plot of 1864 to burn the city.

PODCAST We’re officially subtitling this ‘Strange Tales of 1864’, presenting you with a series of odd, fascinating stories from one pivotal year in New York City history. With the city both fatigued by the length of the Civil War and energized by Union victories, New Yorkers were often at their best — and their worst.

The city unites around an unusual parade — the first regiment of African-American troops — even as it elects a pacifist mayor sympathetic to the Southern cause. A grand and flamboyant fair, uniting the community, offers up a surprising New York tradition — the theme restaurant. Meanwhile, a local newspaper editor devises an elaborate hoax to get rich quick off the gold market.

But with the November re-election of Abraham Lincoln also comes a deadly threat — a Confederate conspiracy aimed at New York’s luxury hotels. Tune in as we recount the botched plot to destroy New York in an conflagration of ‘Greek fire’.

The Knickerbocker Kitchen, a featured restaurant at New York’s Metropolitan Fair. Women dressed in traditional Dutch and Colonial garb and served items believed to be popular with the residents of old New Amsterdam. [NYPL] 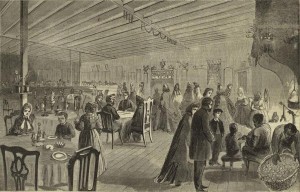 Pavilions were specially constructed around Union Square for the Metropolitan Fair, which raised money for the U.S. Sanitary Commission. 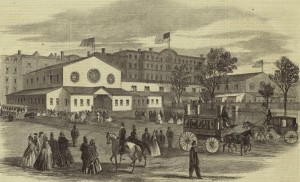 The ‘Indian Department’ at the Metropolitan Fair. [Library of Congress] 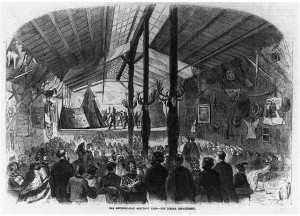 A nighttime ‘torchlight’ rally for presidential candidate George McClellan, the clear choice for New Yorkers in 1864. For a Democratic stronghold like New York, the former general was an especially appealing alternative to Abraham Lincoln. [NYPL] 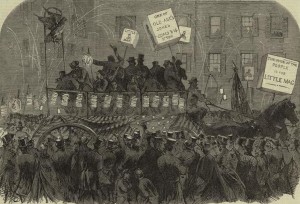 A scene from the New York Gold Room, epicenter of American gold speculation. During the Civil War, traders would buy and sell based upon Union victories and defeats. The trade was also susceptible to false information, such as the events of the Gold Hoax of 1864. (NYPL) 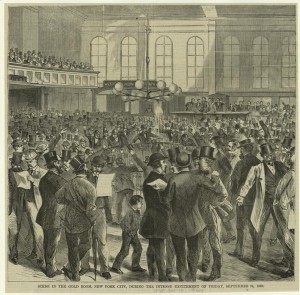 Robert Cobb Kennedy, the only one of the Confederate conspirators to be caught. He was executed at Fort Lafayette in 1865, a couple weeks before the end of the Civil War. 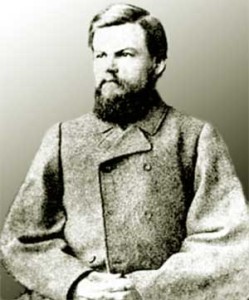