Mulberry Street is one of the most important streets in New York City history, a central artery of immigrant lifeÂ for almost two hundred years. Â Today its northern end is Bleecker Street, crossing Houston Street and heads all the way down to Bayard Street where it curves to the east (the so-called “Mulberry Bend”) where it finishes on Worth Street.

It is one of the many current streets that still retain a bit of their original nature in their names — like Spring Street, for instance. In this case, that notable bend was once lined with mulberry trees. Â In 1764, near the Bend, a linen factory was built here on this once-lazyÂ street and a market specifically for the sale of clothing materials. Sounds soÂ lovely and clean, yes?

Well, Mulberry also happened to abutÂ Collect Pond (or ‘Fresh Water Pond’) on itsÂ northeast shore, although the water here would not be considered ‘fresh’ for very much longer. Â It would become a magnet for all sorts of filthy industries including tanneries and rope-makers — andÂ especially slaughterhouses. So many slaughterhouses, in fact, that Mulberry’s first nickname was ‘Slaughterhouse Street‘.

An early 19th century butcher namedÂ Thomas De Voe lived in a cottage on Mulberry and Spring Streets. He described the street as “a very rough … road that passed along by several mulberry trees, which afterwards gave a name to the much-dreaded route.” He makes mention of 25 or 30 such houses staked on or around Mulberry.

In particular, Nicolas Bayard’s slaughterhouse was conveniently located here, near the pond (to dispose of waste) and near the Bull’s Head Tavern up on the Bowery (to buy cattle from farmers).

Who knows exactly when we lost the mulberry trees but such nature would not be seen again. Â The pond was drained in the 1800s and the slaughterhouses soon escaped to the west side of Manhattan. The land that once adjoined Collect Pond was leveled for development. Unfortunately theseÂ initial properties, built upon swampy foundations, sank into the ground. Subsequent buildings — eventually the worst examples of tenements — were constructed here for poorer New Yorkers who could only afford these pathetic homes, theirÂ cellarsÂ perpetually flooded.

Within a decade, Mulberry would frame a neighborhood of grimÂ notoriety, named for an intersection it would make with four other streets — Five Points.

The Bend would fester to become one of the most infamous areas of Five Points, over-crowded, filthy, “a continual depository of garbage,” according to the 1865 New York Tribune. Â  Jacob Riis hearkens back to the path’s gentler days in How The Other Half Lives:

“Where Mulberry Street crooks like an elbow within hail of the old depravity of the Five Points, is â€œthe Bend,â€ foul core of New Yorkâ€™s slums. Long years ago the cows coming home from the pasture trod a path over this hill. Echoes of tinkling bells linger there still, but they do not call up memories of green meadows and summer fields; they proclaim the home-coming of the rag-pickerâ€™s cart. In the memory of man the old cow-path has never been other than a vast human pig-sty.”

Only when the most terrible of these structures were demolished and replaced with a park in the 1890sÂ would trees finally return to Mulberry Bend. 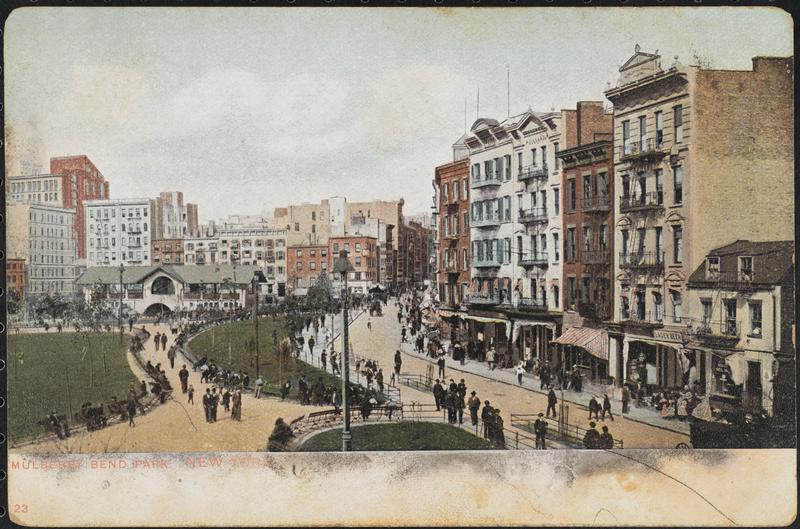