Many of you have asked if we were ever going to do a live event in the near future. Finally you can see us live this September for one night only AND on Broadway!

The Bowery Boys are pairing up with The Ensemblist podcast (hosted by wonderfulÂ Mo Brady and NikkaÂ Graff Lanzarone) to present a one of a kind event — the history of an iconic Broadway theater featuring musical performances by people who have performed there. 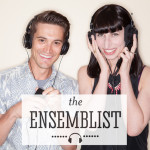 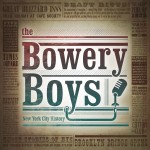 The star of our show is the St. James Theatre, a Broadway stage which opened in 1927 on the spot of the original Sardi’s Restaurant. It was here that many great Broadway musicals originated including Oklahoma!, The King and I, The Pajama Game and Hello Dolly. Â Most recently the theater was prominently featured in the Oscar-winning film Birdman or (The Unexpected Virtue of Ignorance) with Michael Keaton and Emma Stone.

We’ll be discussing some of the history of this classic theater amid an entire roster of Broadway singersÂ performing musicÂ that the St. James made famous. Â The line-up is tbd at this point but we’ll present the names of the performers as soon as we have them.

This is going to be a cabaret extravaganza — so naturally the show will be held at one of New York’s greatest cabaret spaces — 54 BelowÂ (254 W. 54th Street).Â  This is the basement of the former Studio 54. Maybe we’ll dress up like Andy Warhol and Bianca Jagger?!

This is a ONE NIGHT ONLY event— two shows on Sunday, September 13, 2015. Â Visit their website for more information about the show and CLICK HERE to get your tickets.

See you on Broadway! Â AndÂ if you’re a fan of theater and the performing arts, subscribe toÂ The Ensemblist podcast.

Below: The cast of Oklahoma! at the St. James Theatre (1943) and Edward Norton and Emma Stone on the roof of the St. James.