TheÂ end of the 19th century saw many new ways to get people out of New York City’sÂ over-crowded tenement districts, withÂ trains to beach havens like Coney Island and Rockaway Beach and steamers making day-trips up the Hudson River and to spots in Long Island.

For those who didn’t have the luxury of a free afternoon, Â some relief was provided in the form of new community parks such as Columbus Park (1897), Seward Park (1903) and DeWitt Clinton Park (1906).

But whatÂ if you wanted some fresh ocean breezes? The piers of the East River and the Hudson River were clotted with industry and hardly suitable for relaxation. Â  But the city did attempt to make the waterfront available with the introduction of so-called ‘recreation piers’.

There were a great many industrial piers redesigned in the 1890s for public use. By 1905,Â the New York Times reportsÂ recreation piers on the East River side (at Market Street, 3rd Street, 24th Street and 112th Street) and a coupleÂ facing the Hudson River (Christopher/Barrow Street and 50th Street).

Below: Mothers and their children on the Harlem pier, 1901

By noon, during the summer months, the piers were packed with mothers and their babies, groups of young women off work, and scores of children darting through the crowds.

From theÂ Times article: “The averageÂ for the pier at the East River and 24th Street alone is 10,000 persons a day.Â Almost directly across town, at 50th Street and the North River, which the police call the ‘mad dog’ pier, the daily attendance is nearly as large.” 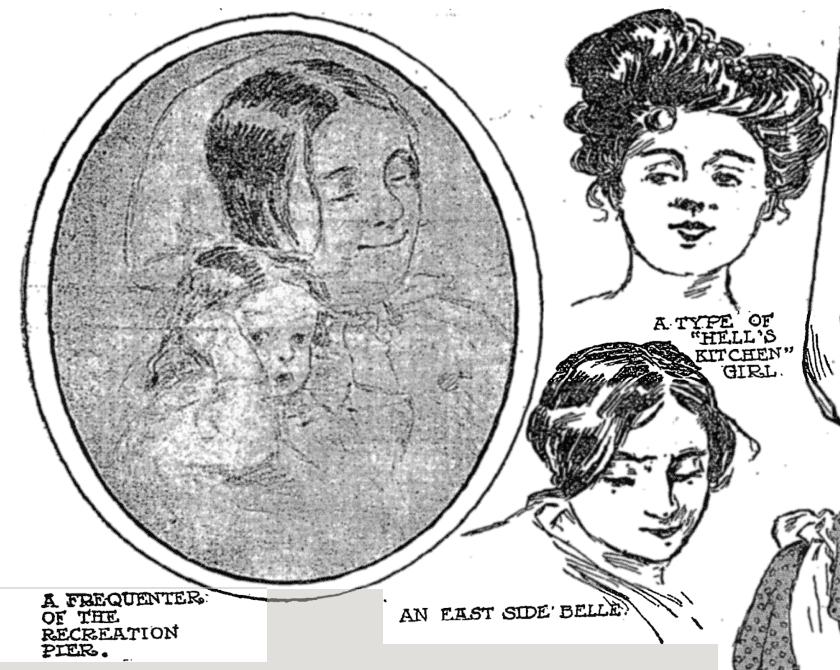 The piers provided a well-policed safe space for poor families, abundant cross breezes, and floating pools and swimming holesÂ for those looking to escape the heat. Many of them regularly provided food vendors, musicians and even street performers, allowing city dwellers to enjoy the illusion of a short vacation getaway.

While no liquor was sold at the pier, many did their best to smuggle it past the watchful eye of the police officers. Â “Flirting and open love making are prohibited,” warned the Times, “Smoking is not. A youth may puff away on his cigarettes, and a man may smoke as vile a cigar as he pleases, anywhere he pleases.”

Below: Children on the Hell’s Kitchen pier, 1903

The Third Street pier provided immediate relief for residents of the Lower East Side.

“That long, low building jutting out into the water changed the ending of Third Street from a sandy, ugly refugeÂ for crap playing boys into aÂ breathing place for thousands of dwellers in the tall tenements all around.Â  It is still sandy and ugly, away from the pier itelf, but there is lots of fun going on, and when you are tired of looking shoreward there is the river, with its endless excitement.” [New Â York Tribune, 1901]

Below: The Third Street pier. According to the signs over the door: “Dancing on this Pier for Children from 3 to 5pm Daily Except Sunday”

The piers were also popular spots for young lovers at night, the open air and the river traffic providing a bit of romance and mystery. The Harlem pier at 129th Street seems particularly enchanting as it was far from the center of the city and its bright, distracting lights.

“When the moon is shining the scene along this garden spot of the Hudson is not to be equaled anywhere around New York. There is nothing of the bustle of the city up here.” [source]

The city took advantage of the piers’ popularity with tenement dwellers in order to provide medical and social services. In 1912 ‘clean milk dispensaries’ provided mothers with free milk for their babies. Â Below: a doctor inspects a young baby at the East 24th Street pier.

Not to be a buzzkill, however, butÂ most ofÂ the piers were hardly secluded from the regular activities of the busy city. The Hell’s Kitchen pier, which opened in 1900, wasÂ perfumed with smells from the trash dump two piers away, not to mention flecks of filth from the neighboring ash dump. And crossing the busy avenue just to get to the pier was somewhat of a task.

Today’s network of waterfront spaces in New York City are certainly more accommodating and convenient than these old piers, but I can’t help but wish one or two were still around, especially if they looked like this:

1 reply on “Hey gang, let’s go down to the Recreation Pier!”

I have an invitation to one of the children’s folk and dance festivals from 1912. I’d love to know more about it. From the Department of Docks and Ferries. It also contains the program.