It’s the actual title of a grim pamphlet the New York Police Department distributed to tourists in 1975, providing insights into staying safe during this period of high crime and government cut-backs. Today itÂ does read a bit like promotional material for an actual horror filmÂ The Purge, a fear-mongering document meant to embarrass city officials and galvanize communities. 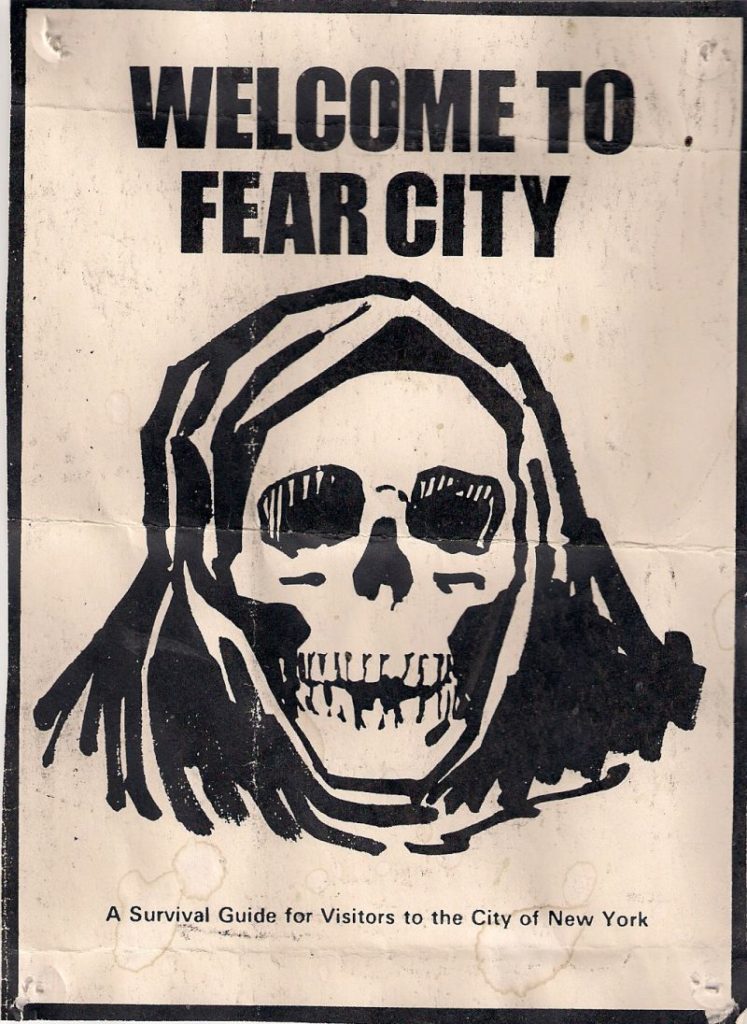 The flyers enraged Mayor Abe Beame, who was scrambling to come up with money to save New York, and he even slapped a restraining order upon the president of the Patrolmen’s Benevolent Association who was attempting to distribute the flyers. “Abandoning the notion of leafleting the airports,” writes Phillips-Fein, “police officers instead drove aroundÂ trucks decked with American flags and red-white-and-blue bunting around the city, blasting out warnings about the threats to public safety.”

How did New York City get itself into this weakened, paralyzing situation? And just as impossibly — how did the city manage toÂ get out of it?

In Fear City, Phillips-Fein manages to sift through this complicated and seemingly indecipherable story and recount even the most gloomy late-night board meetings with a vitalÂ urgency.

In essence, it does have a horror-film quality,Â as we watch a festering monster grow in size within the corridors of government. New York’s financial woes began in the late 1950s, as the city began taking out large, virtually unchecked loans, playing elaborate games on spreadsheets in order to pay the bills. They were assisted by state government (who at first facilitated such borrowing and even changed laws to allow it) and the eager ratings agencies who considered New York a safe A-rating bet as late as 1973.

Mayor Beame, besieged by reporters outside of Gracie Mansion

To be fair, under prior mayors,Â coffers began achingÂ under increased funding of social services, expanded to combat growing threats such as the depopulation of some neighborhoods (due to the growth of suburbs) and the spectre of deteriorating infrastructure.

But by the mid 1970s, the city and its new mayor Abe Beame faced the terrifying possibility of bankruptcy. This would not only be bad for the city, but for the nation as a whole, destabilizing the country’s banking networks. Indeed New York threatened to fall into a hole and pull the entire country in with it.

“Over time,” writes Phillips-Fein, “the fear of bankruptcy took on a life of its own.”

The one person with certain power to bail out the city chose not to. President Gerald Ford would eventually butt heads with his own vice president Nelson Rockefeller over the country’sÂ involvement with New York. “Most of Ford’s advisers believed New York was shamelessly begging for help to prop up its welfare state. The cold light of default … might be the only thing that could compel the city to change its ways.”

We know how that ended up turning out. 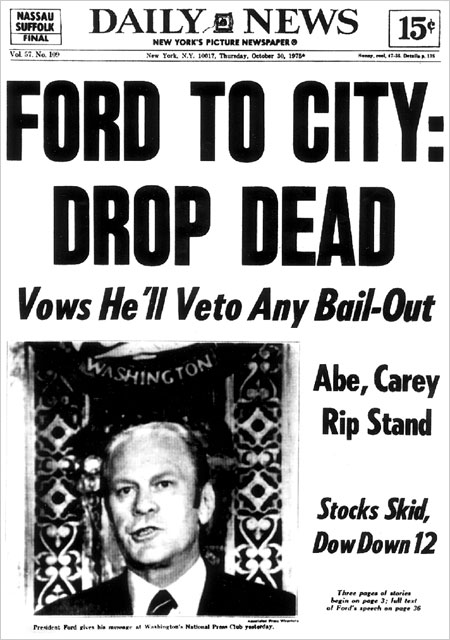 But if Ford wouldn’t come to the table to offer assistance, Beame often had a problem admitting there was a problem at all. At times he sounds like an addict, frantically coming up with excuses for his own behavior. “He claimed the city was just running low on cash while it waited for revenues to arrive.”

You may know portions of this story quite well — some of you lived through itÂ — but you may not know the varying and even opposingÂ ways that the city got out of this mess.

On one level, it did so with the help ofÂ financiers and CEOs, leading task forcesÂ Â of great and questionable power.

Empowered by a late-night act hurriedly passed by the state senate, the ominous-sounding Emergency Financial Control Board oversaw all city expenditures, “wrest[ing] control over the city’s finances out of the hands of the mayor and the City Council.”Â Among those on the board were the CEOs of New York Telephone Company, American Airlines and Colt Industries (the gun manufacturer).

Below: Anger at the EFCB’s actions to close Hostos Community College inspired vigorous protests. Such community action helped save the college.

But the real bailout came from the citizens of New York themselves who weathered the horrifying notion of “planned shrinkage,” the drastic and detrimental cutbacks to hospitals, schools and public transit, generally speaking, with great resolve. (Events like the Blackout of 1977 notwithstanding.)

But they did not weather them quietly.

Communities were not afraid to push back against aggressive cuts that would have endangered them, such as the efforts by one Greenpoint community to save their fire house from closure and another by a South Bronx residents to stop the shutteringÂ of a unique educational institution — Eugenio Maria de Hostos Community College of the City University of New YorkÂ — aimed at the community’s bilingual residents.

Phillips-Fein, an associate professor at New York University, has crafted one of the best history books of the year out of one of the ugliest periods in New York City history.Â Aspects of this story reverberate into present dilemmasÂ — on the local, state and national levels –Â as austerity measures take center stage as possible solutions to deficits and shortfalls. Let’s not hope for any sequels.

I hope Mr. Phillips-Fein has the courage to tell the truth about the devastating role of welfare in the city’s downfall. Thousands of rural black bused up from the deep South and thousands more of the worse elements of Puerto Rico, were placed on welfare starting as far back as the 1930’s, all to increase Democratic voter rolls. (the more things change the more they remain the same.) There were other factors, to be sure, but none as bad as this.