On Wednesday, Governor Andrew Cuomo announced that the busts of Robert E. Lee and Stonewall Jackson, located on the campus of Bronx Community College, would be permanently evicted, following the removal and dismantling of several sculptural depictions of the Confederate generals across the country in recent days.

There are many great Americans, many of them New Yorkers worthy of a spot in this great hall. These two confederates are not among them.

The funny thing about these particular busts though. Most New Yorkers were probably saying to themselves, “Busts of Confederates? In the Bronx?” Â Cuomo’s statement is probably the most that been written about them in more than five decades.

But many people have been displeased with Lee’s placement in the Hall of Fame from the moment it was decided to place his bust there back in 1900. Angry New Yorkers wanted to rip down his likeness before it was ever even erected.

Below: The Hall of Fame bust of Robert E. Lee

History remains static even as our recollections of it evolve, even as our monuments to it transform without a single chip of the chisel. Statues often reveal more about the nature of collective memory than the likenesses represented in these honors.

Nowhere in New York City is that more true than a strange little nook of marble busts in the Bronx.

The Hall of Fame of Great Americans, located on the beautiful campus of Bronx Community College (the former uptown campus of New York University), used to be considered a very, very important place.

Tucked on a scenic cliff overlooking the Harlem River (and with the Cloisters well in sight), the Hall of Fame Â was an ambitious project constructed in 1900 with the idea of immortalizing Americans who had made significant contributions to the sciences, the arts, politics and the military.

Spearheaded by then-chancellor of NYUÂ Henry Mitchell MacCracken, the project is the first real memorial â€˜hall of fameâ€™ concept to be executed in the United States. With America flush with Gilded Age wealth, the Hall of Fame was intended to be an American pantheon, a modern response to the god-filled marble hallways of Europe.

Walking along the spacious colonnade tucked behind the Stanford White-designed Hall of Philosophy, you are thrown back into a mix of turn-of-the century scholarly aesthetic and the belief of equating the American movement with ancient Roman and Greek forefathers.

There are 98 portrait busts representing a host of great minds — many recognizable, other completely forgotten today. The hall was regularly updated Â up until the 1970s. Several people have been voted into the Hall of Fame but never received busts (sorry Andrew Carnegie).

Prominent American citizens voted on who would be the first entrants to the Hall of Fame in 1900. Â When the ballots were at last tallied, a great number of (exclusively) men included some very obvious choices (Benjamin Franklin, Abraham Lincoln) some inspired ones (Nathaniel Hawthorne, Peter Cooper), and a couple bizarre ones, by today’s standards (the famed botanist Asa Gray).

Interestingly one man who had fought for the Confederacy during the Civil War made the original list — Robert E. Lee. Over a half century later, he would be joined by Stonewall Jackson, another Confederate general.

Below: Lee, photographed by Mathew Brady in 1865 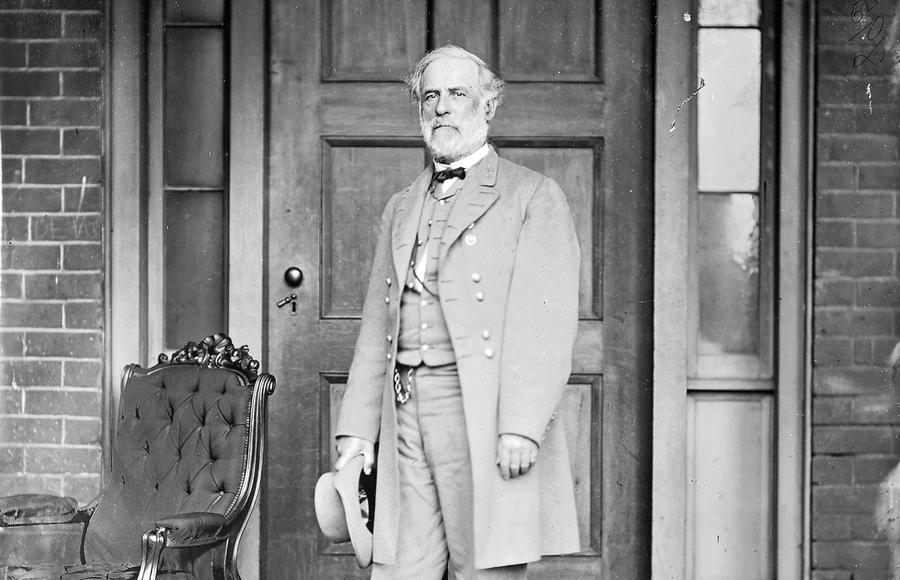 The Jackson bust was installed in 1957 after a vigorous campaign by Â Confederate history supporters. According to Richard Rubin of The Atlantic: “Newspaper publishers used their editorial pages to lobby for or against nominees, and groups like …. the United Daughters of the Confederacy waged extensive, expensive campaigns to get ‘their’ candidates elected.” [See picture at the bottom of this article]

But Lee’s appearance in this immortal pantheon was almost never in question — at least for those who voted on the original inductees.

However, almost immediately, the possibility of Lee’s inclusion became controversial. The idea of a Confederate general — responsible for the deaths of thousands of Union soldiers — seemed ridiculous, even offensive, particularly to Northerners and to the residents of the city which would hold the Hall of Fame.

Leading the charge against Lee was the New York Sun.

“At this time there has come up a false and mushy sentimentality which would have the American people forget the outrage against the Republic committed by the rebellions forces under the command of Robert E. Lee. It is that meek and mawkish sentimentality which puts the name of Lee among the great commanders entitled to the veneration of posterity. Â Hail to the Stars and Stripes and always death and confusion to its enemies!”

The New Orleans newspaper The Times-Democrat promptly went after the Sun:

“[T]he protagonist of the Lost Cause possessed personal beauty of the ideal kind and accomplishments which perfectly fitted him for the high station which was his, from the bright beginning to the sombre close of his career. [H]e sacrificed wealth and ambition, to battle for a cause which, to his keen professional eye, was predestined to failure.”

(Their response seems to revel in the ‘mawkish sentimentality’ upon which the New York Sun was remarking!)

In Alabama, the Montgomery Advertiser also trashed the Sun: “No doubt that paper is an admirer of John Brown and others of his character while vilifying one of the greatest captains of the century.” Brown led the raid on Harpers Ferry in 1859, an event which became a causeÂ cÃ©lÃ¨bre for Northern abolitionists.

But supposing Lee was honest in his belief, it is not customary or proper to honor a man for making the mistake of a lifetime. We may forgive his offense but neither justice nor charity requires that we should do more than maintain silence on the subject.

Let those who know Robert E. Lee honor his memory for such good qualities as they found in him, but the Hall of Fame should be reserved for those whose public services are worthy of honor.”

A month later: Â “I protest against his name being coupled with the patriots of his time. Robert E. Lee deserves the everlasting contempt of every soldier and every honest American for accepting the surrender of brave Union soldiers when he know they would be sent to be starved and tortured in Southern prison pens.” — NYT, Oct 16, 1900

Then there’s this one: 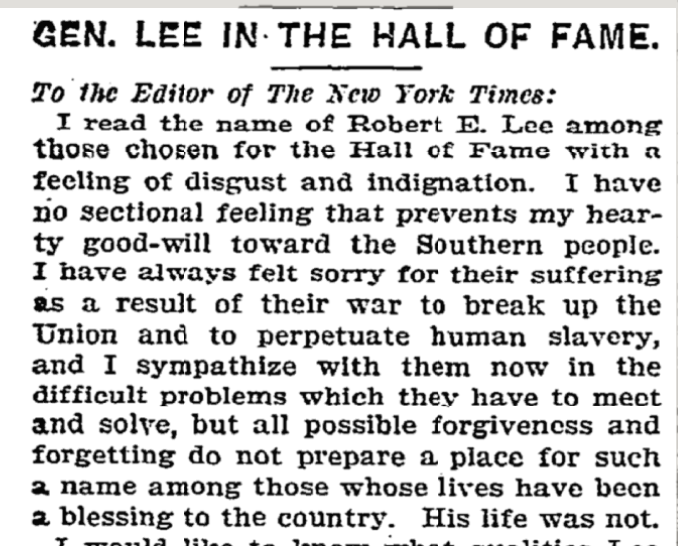 Read the rest of this letterÂ here:

Many of the letter writers were certainly alive during the Civil War. The veterans organization Associated Survivors of the Sixth Army Corps of Washington passed a resolution against the Hall of Fame organizers, declaring “General Lee was an enemy to his country and failed to do his duty at a critical time.”

However it is interesting that of all the objections about Lee and Jackson, none directly had to do with slavery or the plight of enslaved people.

An illustration of the first inductees from the New York Tribune: 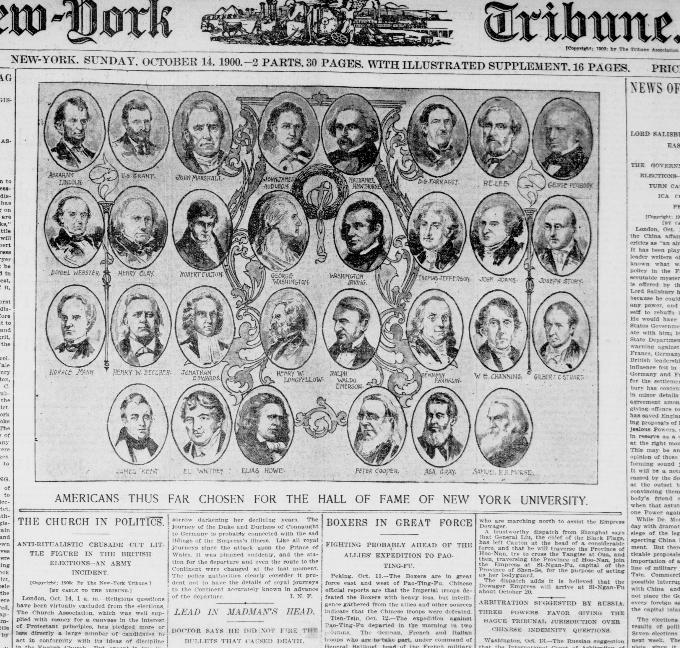 Others thought of the Â Hall of Fame a place of representative honor and so Lee must be included, if only to bring the Southern states into the hall’s august glory.

“Would it not be a graceful tribute to our worthy Southern brothers to include the names of some of their great heroes on the Hall of Fame record? Though Robert E. Lee and T. J. Jackson fought for what we think is a bad cause, yet we should not forget that such men acted as their consciences dictated, and their whole lives show them to be great, good and most worthy gentlemen.”

Others set aside grievances with Lee and took aim at another candidate — John C. Calhoun, the former Vice President who set the wheels of the South’s secession in motion.

From a Boston newspaper: “The judges are having trouble enough from their assignment of a pedestal to General Lee. But Lee did not formulate policies. To have put the Great Nullifier in the American Pantheon would have bred a riot.”

To which the Atlanta Constitution replied: “A truly cultured people ought not to be lured into a riot because of honor paid the memory of a great man.”

In the end, Lee would be among the original inductees to the Hall of Fame. (Calhoun would fail to make the final cut.) Indeed the balloting proved both general to be well regarded in their day, placing higher in the voting than all generals by Ulysses S. Grant.

The Hall of Fame is a true curiosity in the â€˜roadside attractionâ€™ sense. Once NYU sold the campus in the 1970s, the colonnade was virtually neglected, the hall of fame forgotten.

It is a modern ruin that current events has dusted off for new evaluation.

Below: The installation of Stonewall Jackson’s bust in 1957Â

Portions of the research for this article were taken from a previous article I wrote about the Hall of Fame back in 2009.

[…] However, I don’t think this acknowledgement spread to the Northern civilians. In any case, the men that established the Hall of Fame for Great Americans at Bronx Community College included Le…. Maybe it was out of an effort for reconciliation in the beginning, as there was pressure years […]