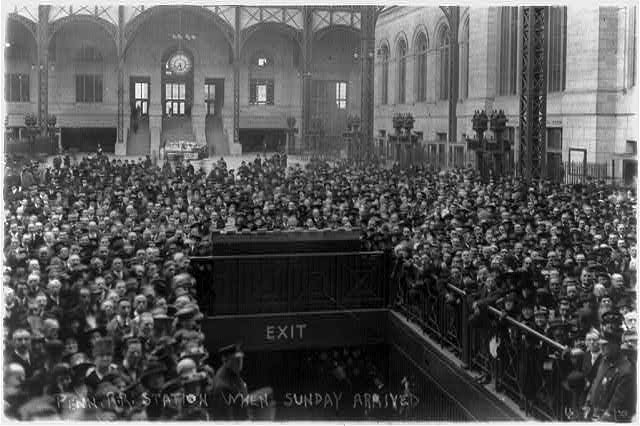 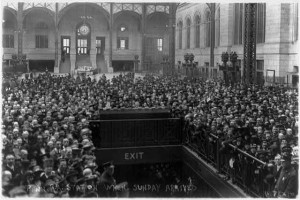 ANATOMY OF A PHOTOGRAPH An occasional feature where we take a closer look at an old photo of New York City, to give the image some historical context and piece together the situations that led up to it.

I ran the photograph above on Friday in reference to the early days of Pennsylvania Station. But the people cramming onto Penn Station’s platforms aren’t waiting for a train. They’re waiting for Sunday.

Billy Sunday, that is, America’s preeminent evangelical preacher in the 1910s.

Sunday was an outsized gospel celebrity, a former baseball star turned preacher who gloried in proselytizing to large audiences, a perfect spiritual fit to the Gilded Age. 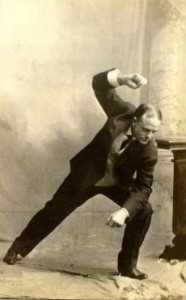 By 1917, Sunday was 65 years old and the most popular religious voice in America. He traveled with his wife Helen — and a staff of over 35 people — to many major cities in the United States in high profile spiritual ‘campaigns’. In an era without microphones and sound systems, Sunday electrified audiences with hyperactive body movements, violent eruptions of fire and brimstone, and elaborate presentations featuring ecstatic choirs and even chair smashing.

Chair smashing? Of course New Yorkers were excited. Sunday pulled into Penn Station on April 1917, for a series of highly publicized revivals that would run ten weeks. His arrival in a private Pullman car was greeted by almost five thousand people.

Sunday at first didn’t care for New York — calling it a ‘graveyard for evangelism’ — but New Yorkers certainly loved their Billy, as evidenced in the photo above. Eventually Sunday came to appreciate the New Yorker as well: “I think New Yorkers are keener than country folk. They are more used to seeing and hearing new things; they catch on quicker. I couldn’t give them any Class B stuff; not even when I was tired or wanted to.”

Sunday actually had his very own temporary tabernacle built for him, on Broadway and 168th Street (See below), on the site of Hilltop Park, former home of the New York Highlanders (later to become the New York Yankees). Sunday’s wife had spent the months before her husband’s arrival rallying the attentions of New York’s wealthiest businessmen, including John D. Rockefeller Jr., to assist in building the 16,000-seat arena. 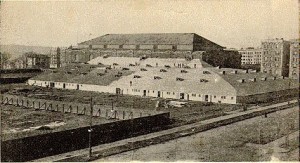 The Sunday tabernacle was specially built “to fit his voice,” according to the New York Times, and also included a private bath for the preacher, “as the physical exertion of his speaking compel him to make an entire change of clothing after each service.”

From April 8 until June 19, 1917, Sunday engaged thousands with his messages and wild, half crazed performances. Naturally one of his pet causes was temperance; within two years, Congress would prohibit the sale of alcohol with the Eighteenth Amendment, something Sunday was instrumental in promoting.

Also factoring into Sunday’s success: America entered World War I that April, fueling attendance records. “If Hell could be turned upside down, you would find stamped on the bottom ‘Made in Germany,” he famously cried from the pulpit.

Sunday’s final assessment of the city: “New York has shown me that its Great White Way is not the pathway to hell that many believe. I know that many who walk the pavements of Broadway are as close to God as I am.”

New York was the culmination of Sunday’s success. America would swiftly outgrow Sunday’s hammy style by the 1920s and he would soon return to small town chapels and backwoods revival tents.

BELOW: Billy in his New York tabernacle on Palm Sunday 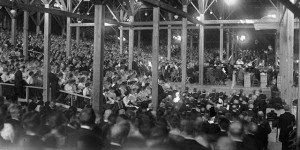