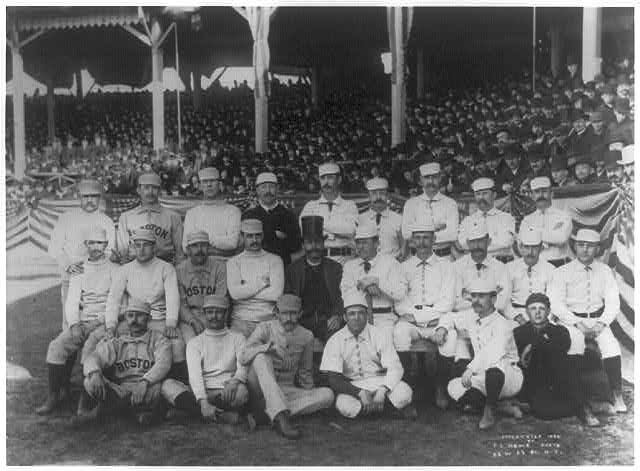 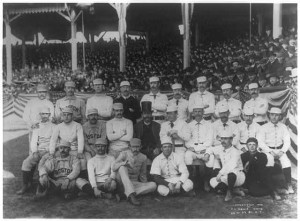 The Metropolitans vs. the Beaneaters, captioned: “Boston and New York players on opening day, 1886, at the Polo Grounds, 5th Ave. and 110th St., NYC. posed in front of stands; Boston player in back row on left has his middle finger raised in obscene gesture.”  LOC

Eli Manning, Tom Brady — how heavy the burden you bear on your shoulders!

When the New York Giants meet the New England Patriots this Sunday for Super Bowl XLVI, the beast of an old rivalry will once again emerge from the gridiron, the latest configuration of a fierce competition between two of America’s greatest cities.

While the rivalry between Boston and New York primarily manifests within the world of sports — the venue of modern warfare —  it echos a spirit of competition that has existed between the coastal cities for over two centuries. But how did it begin? 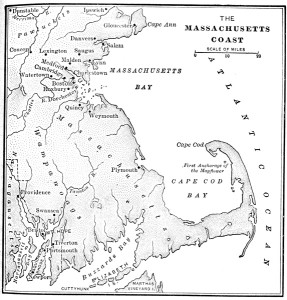 The cultures of the cities which would become Boston and New York were drastically different from the very start. Boston, after all, was founded in 1630 by Puritans of the Massachusetts Bay Colony (at right), a society based on specific religious values, with little tolerance for variation. New Amsterdam, New York’s pre-cursor, developed as a company town in the 1620s and was quite renown for being notoriously value-less, relatively speaking.

The Puritans, with a moral superiority that paralleled national antagonisms, believed a distasteful mix of cultures, an abhorrent godless mixture festered there in New Amsterdam. As a secular development, New Amsterdam fostered a policy of religious freedom far more in keeping with modern American ethics than the stringent, finger-pointing Puritans. Many so-called heretics fled the Puritans and were granted haven by the Dutch.

The Puritans were fortified by their connection to England, while New Amsterdam was a rowdy outpost of a faltering world power. By 1644, Massachusetts had created a powerful alliance with other colonies, allowing England a stronghold in the New World. New Amsterdam, meanwhile, deteriorated as the Dutch focused on warfare with the Lenape and encroaching colonies such as Swedish. Peter Stuyvesant arrived in 1647 to shape up the Dutch town, but by then motions were already in place to drive them out entirely.

By 1664, the Dutch were thrown out of New Amsterdam and the defeated city was renamed New York, part of a larger British colony named for the Duke of York.  Boston, for its part, became the premier British bastion, capital of the Dominion of New England, and a place many believed chosen by God (the storied ‘City Upon a Hill’) as a shining beacon of humanity. Boston was right to have an attitude. Even as New York and Boston became competing ports in the British era, the Massachusetts city always had the edge.

America has benefited from Boston pride. The opening salvos of American independence were born from clashes between Boston citizens and British soldiers, rebellion in the form of bloody clashes (the Boston Massacre) and economic unrest (the Boston Tea Party). As colonists rose up against British oppression during the Revolutionary War, they could look to the Boston battle at Bunker Hill as an example of victory and perseverance.

Both cities struggled for economic footing after the war. Both had sophisticated ports and bustling harbors ready to send and receive shipping vessels, manufacturing plants rivaling anything overseas, and a growing class of wealthy old-family elites. In Boston, they were the Brahmins and went to Harvard. In New York, they were Knickerbockers and turned to Yale or Princeton. (Columbia was not quite in their league yet.) 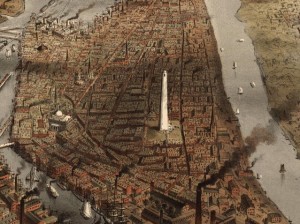 But only one city had access to a river inland, a point made explicit with the opening of the Erie Canal in 1825. Suddenly, New York became a gateway into the expanding American west. Not only would New York traders and merchants grow rich and form a nouveau upper-crust (thriving in the wake of men like John Jacob Astor), the canal would siphon away much of Boston’s livelihood, one ship at a time.

Bostonians were not pleased. The founder of Boston’s first daily newspaper saw a diversion of goods to New York as ‘evil‘ and recommended the city jump on a newfangled transportation idea just debuting in England — the steam-powered railroad. Within a few years, train tracks stretched down the old Boston Post Road (almost, but not quite, to New York) in an effort to connect Boston to the waters of the Hudson River. Or as author Eric Jaffe observes: “…the goal of everyone involved in Boston’s railroad system at the time was clear: to move Manhattan toward the [Massachusetts] Bay along the highways of the future.”

The two cities remained locked in quiet, but stiff, competition throughout the 19th century, not only in industry and trade, but in intelligentsia, literature, politics and social ‘quality’. The dynamics of both cities changed with the immigration boom that began in the late 1840s. Soon, one fifth of the populations of both cities would be Irish. The culture of Boston was greatly affected, perhaps more that any American city, by these new Irish arrivals, but it was New York that felt the most weight. By 1860, with New York as the biggest city in America, even the city of Brooklyn had a greater population than Boston.

Bostonians had their legendary, steely pride for their city — in many ways, America’s first, greatest city — but New York was a powerful, untouchable metropolis by the time of the Gilded Age. Despite its grime and squalor, despite its sinful and corrupt reputation (or perhaps because of it), New York had bested Boston to become the biggest, richest, most powerful city in America by the time of the Civil War.

Below: New York City in 1873 (from George Schlegel lithograph) 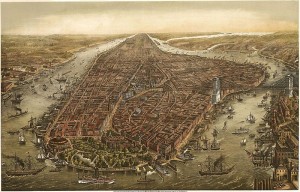 And so it was that, in the late 19th century, an apparatus arose for which the undercurrent of rivalry between the cities could take a more explicit, more robust form — sports.

Universities already organized sports teams — with accompanying rivalries of their own — and now, in the post-war era, professional teams began sprouting up in a wide variety of games. The first sports leagues formed in the Northeast, thus it was natural that teams from Northern and Rust Belt cities would often clash.

The first organized baseball league principally concerned New York and Brooklyn teams. (Don’t even get me started on the New York/Brooklyn rivalry!) Teams wouldn’t truly take on defined regional characters until the formation of the National League in 1876, which included the Boston Red Stockings, a precursor of the Sox, among its original teams.

The two baseball franchises that would cement the Boston-New York conflict were born in the 20th century. The Boston team came first, in 1901, with the inauguration of the American League, but were not referred to by their distinctive bold-colored foot coverings until 1908. In 1904, the Boston team was declared champion of the American League. However, National League teams looked down upon the ‘inferiority’ of the younger American League teams, and thus, what might have been the first World Series — between the Boston Red Sox and National League victors the New York Giants — never occurred.

The Giants were considered New York’s principal baseball franchise and even spawned a successful soccer team. (They frequently played a soccer spinoff of the Boston Beaneaters.) By this time, another New York team limped into the city in 1903 — the Highlanders, who later changed their name to the New York Yankees. 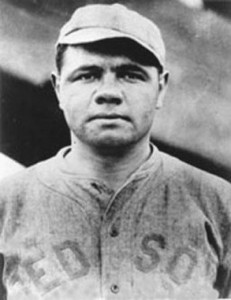 On December 26, 1919, came an event that changed the fortunes of the Boston Red Sox and the New York Yankees forever. Red Sox star Babe Ruth was traded to the New York Yankees during the off-season 1919-1920, allegedly because Sox owner Harry Frazee was looking to finance his Broadway musical offering No No Nanette. (That’s the popular legend, although many believe the trade was to finance another, equally  ridiculous production called My Lady Friends.)

Whatever the origin of the ‘Curse of the Bambino’, it had a psychological effect on fans and players on both sides. Boston, once the league’s most successful squad, didn’t win another World Series until 2004, while the Yankees, well, changed sports history with 27 World Series victories.

The deep animosity spilled over into other sport match-ups. In basketball, the New York Knicks pale under the legacy of the Boston Celtics, simply put the best basketball team in history. In hockey, the Boston Bruins and New York Rangers became the first two American teams to play each other for the Stanley Cup in 1929. The Bruins cleaned the ice with the Rangers. 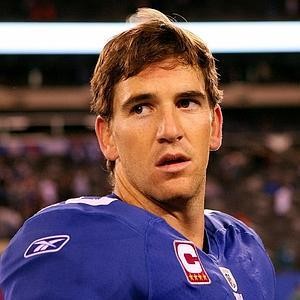 But it’s in football that the two cities have had some truly dramatic clashes. The New York Giants football team, hardly a threat when they first formed in the late 1920s, were a force to be reckoned with by the time they first met the Boston Patriots in 1960. Notably, when the Boston team changed its name to the New England Patriots and moved to Schaefer Stadium in Foxborough in 1971, the first game they played was against the Giants.

The Giants and the Patriots have met in the Super Bowl just once before — and notably so — in 2008. New York was the victor, in one of the greatest upsets in sports history. This Sunday, Boston seeks revenge. As you sit through a halftime show with Madonna (a New Yorker in her formative years), ponder upon the weight of history hanging over both teams.

To sports fans: I welcome any clarification of details if I’ve gotten something wrong!