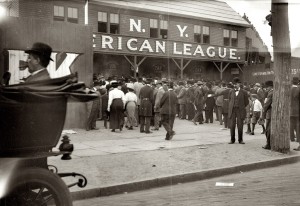 This weekend marks the end of the regular season in Major League Baseball, as the New York Yankees head to the playoffs, and the New York Mets head to, well, I’m sure many very lovely, well-deserved vacations.

The Yankees, defending World Series champions, were doing okay for themselves a hundred years ago also, when they were called the New York Highlanders, placing second in the American League to the Philadelphia Athletics. Second place was the best the Highlanders would ever do; ultimate victory would only come when they were bought in 1915 by beer mogul Jacob Ruppert and their name changed to the most press friendly ‘Yankees’. (Hear more about their history in our 2008 podcast on the history of the New York Yankees.)

Below I’m reprinting my article from March 2008 about the Highlanders uptown home Hilltop Park. And I’ll get to the old haunt of the Mets on Friday….

Before they went by their better known name — and before they were really any good — the team that would become ‘the Yankees’ were known as the Highlanders, from 1903-1913. The name played to a couple dated references. The team captain was named Joseph Gordon, and the name referenced a British military outfit named Gordon’s Highlanders. More importantly, the team played on one of the highest points in the city, in a long forgotten ball field called Hilltop Park. 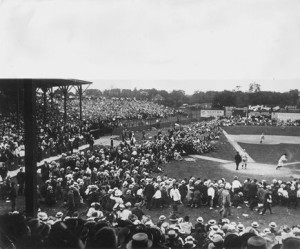 Hilltop Park is almost completely gone save for one peculiar memorial. In 1914, almost as soon as the Highlanders moved to the nearby Polo Grounds (and thus changed their team name to their popular nickname ‘the Yankees’), the field was demolished. Within ten years, the hospital that today is known as the Columbia-Presbyterian Medical Center would be built over it, and it stands there still today.

Reprinted from the Bowery Boys article from March 20, 2008