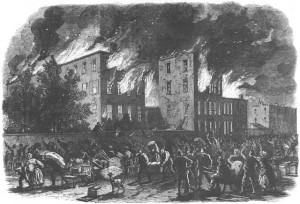 Think of what it would take for you to go out into the streets of New York City, wielding a ballbat or a knife, to join in a mad unstoppable riot.

Then amble over to the corner of 5th Avenue and 44nd Street, across the street from the Best Buy, and put yourself in a time machine, going back 144 years, to 1863. The New York Public Library that stands at 42nd wouldnt be built for another 30 years. Smelly Nat Sherman store down the block wouldnt appear for another 120 years.

You would be standing at the site of a very loathesome result of the Civil War military draft riots, which started on July 13, 1863, drawing hundreds of angered New Yorkers into the street. Congress had just passed strict and rather unusual draft laws to enlist men into the Union army, at that time in the height of battle against the South. Names were drawn at random, and those selected either had to serve three year terms of military service, or pay $300 to ‘commute’ service. Clearly this type of structure favored the rich, so when names were drawn on that fateful July 13, angered men took to the streets.

Their vengence once it hit the streets quickly distorted past mere draft issues. The throng mostly consisted of Irish immigrants and poor laborers, and their targets soon became another group of New Yorkers who competed (often more successfully) for the city’s scarse number of jobs: freed blacks. By the end of the rioting two days later, almost a 100 people would be killed and thousands of dollars of property lost in flames.

Including the building that once stood on this corner — the Colored Orphan Asylum, a home for hundreds of young children and one of New York’s more magnimous outreaches by rich white New Yorkers. Rioters descended on the building with clubs and torches, as workers frantically rallied 233 scared young charges to an exit and to safey. The entire building was destroyed, however miraculously all but one of the children were saved.

Some more unbelievable details of the Riots can be found here And for a vivid glimpse of the Riots, you can check out Martin Scorcese’s Gangs of New York — where, incidentally, you can also check out the original Bowery Boys, the notorious Five Points gang that wrecked havoc through downtown Manhattan!