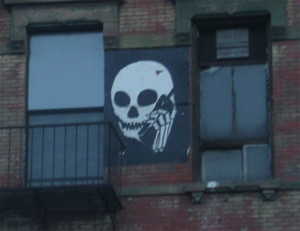 To stick with our morbid spooky theme this week, I thought I’d turn the spotlight briefly on literally the deadliest venue in New York nightlife history — McGurk’s Suicide Hall, formerly at 295 Bowery.

Prostitution was the Bowery’s oldest profession, drawing thousands of women and girls with often the only form of making money they could find. It was so prevalent that even the theaters there on certain nights of performances permitted prostitution in the uppermost tier of seats. “‘Public prostitution [in the theater] is not noticed by law,’ admitted one observer.” (Below is a picture of the old Bowery Theater, where such seamy occurances would happen in the top balcony.) 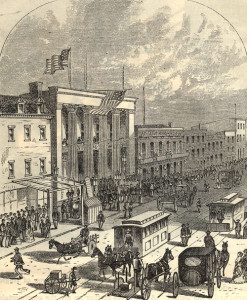 One had to have fallen pretty low to even enter John McGurk’s tawdry establishment, opened in 1895, in a space once used as a hotel for returning Civil War veterans. And even lower — much, much lower — to attempt to sell your body at McGurk’s. It was considered the worst and most squalid dive bar in the Bowery. “McGurk’s was nearly the lowest rung for prostitutes” according to Luc Sante’s book Low Life. It would not be surprising then to find that those that found themselves draped within the doorways of such a wretched place would be prime candidates for depression and suicide.

The bar became the destination of a great number of suicides, either from carbolic acid or a leap from its fifth story. According to Forgotton NY, six girls killed themselves in 1899. Most were teenagers who believed they had few options in life; I can painfully imagine a few experiencing something particularly rancorous at McGurk’s and taking a improvised leap in grief and horror.

McGurk, turning lemons into a morbid lemonade, actually renamed his place ‘Suicide Hall’ as a marketing ploy. And the reputation of the dive did draw its share of curiousity seekers, often from the upper class after a night at the theatre, looking for a bit of macabre excitement.

McGurk eventually closed the Suicide Hall and moved to California. The building saw nothing but flophouses and ruin for the most part of the 20th century until an artist couple took over and turned into a workspace. They were in turn forced out by the power of gentrification; it has now been transformed into the sleek glass condominium Avalon Bowery Place.Â

The resident of the building at the time of demolition, sculptor Kate Millet, sums it up nicely: “If McGurk’s is turned to dust and supplanted with blank high rise market housing, official power will have buried its past in order to expunge it. Then it will be as if it never happened. No one will ever have to notice these deaths, mysterious folk reason that this building has stubbornly remained notorious for a hundred years, a landmark of gossip and legend repeated in every nook about the city of New York, an eerie and appalling specter never dealt with, formally and publicly never acknowledged.”

Well, they certainly tried to warn the Avalon people. If people start seeing the ghosts of women plummeting to their deaths, don’t blame us.

Below: what the building looked like in its final days (the skull is a nice touch). 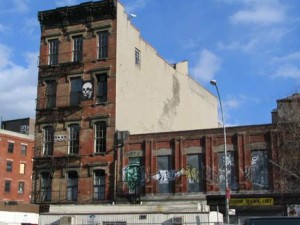 Three cheers for pausing to tell the stories of the exploited and the forgotten, as they pass out of memory…although I hope a few ghosts come back to kick yuppie ass in the condo!