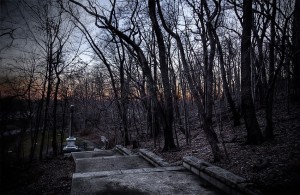 I often try and take my own pictures of various locales I speak about, however the battery of my camera died on me during my Prospect Park journey. The picture above of Lookout Hill and other amazing photography of New York landscapes by Dalton Rooney can be found here.

What’s strange about talking about New York in the Revolutionary War is that it’s virtually impossible to imagine it happening. The city has expanded and transformed to such a degree that the notion of gun smoke hanging over a Harlem neighborhood or thousands of British soldiers marching through what is essentially midtown Manhattan is a little daunting to comprehend.

Prospect Park may be the one place in the New York region where the terrain is at least partially similar to how it was in 1776. And it happens to be sight of a few Revolutionary War skirmishes and landmarks still strewn through the park today:

— The Maryland Society Battle Monument (pictured above) atop Lookout Hill is the most difficult to find, but you’re rewarded with a vista that’s fairly undisturbed since its days as a strategic hilltop. This isolated piece honors the greatly outnumbered Maryland volunteers who lost their lives on this hill and in battles nearby, as the British rushed through the countryside.

Erected in 1895, this may be a small monument but it’s the only one Stanford White ever designed for the park. Most notable is the somber George Washington quote etched into the side: “Good God, what brave fellows I must this day lose”

— A leisurely stroll away is the Dongan Oak Monument, just west of Prospect Park Zoo. The Dongan Oak was a tree of terrific size at least a hundred years old by the time Washington’s army took this area, now known as Battle Pass. By cutting down this tree, the Americans were able to hold off the British until they were cut off from behind and had to flee. This monument was installed in 1922 with a noble eagle atop it. The eagle has actually been stolen and replaced twice since then, perhaps by British people.

— Close by are two other monuments to Battle Pass, plaques affixed to boulders alongside East Side Drive through the park. Of interest in the one on the north side, which indicates the position of Valley Grove House, a famous tavern that bore witness to the violence. As it has been described, the tavern was “an old, topple-down inn, and stood in the lowest part of the road; in a damp evening, one can feel the chill of the heavy air in turning towards it on the way from Brooklyn to Flatbush.”

— On the other side of the Zoo is the Leffert’s Homestead, one of Brooklyn’s most famous homes, and an excellent example of an early New York farm house. However, this site, in its relation to the Revolutionary War, needs to come with a big ole asterisk, as 1) the original was burned in 1776 by escaping American forces looking to distract oncoming British forces, and 2) sat somewhere else entirely, on Flatbush Avenue. It was moved to its present location in 1918.